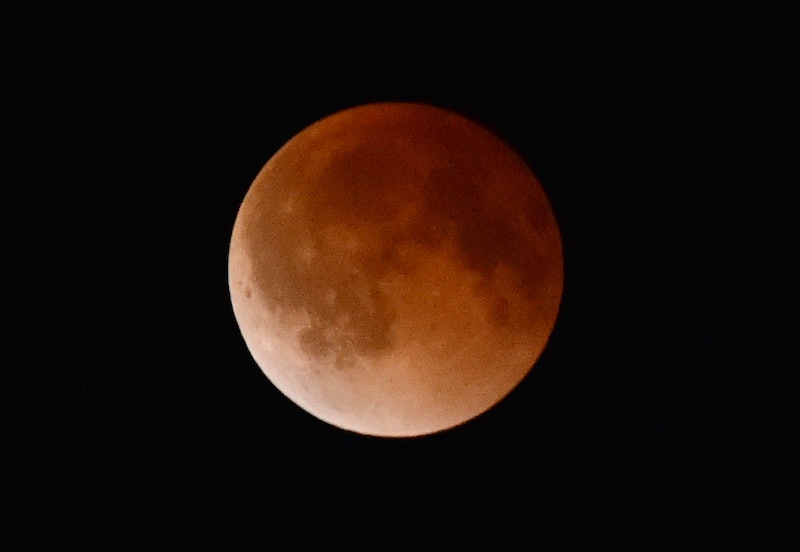 Signs of fall are in the air (and in our Starbucks cups), and they're in the sky too. Tonight, you'll be able to see the Hunter's Moon, another marker that fall is in full swing. This October supermoon (on the night of Oct.15 to 16) will come up sooner, brighter, and redder than full moons during the rest of this fall, and this year.

The name of this phenomenon comes from its time of year, when hunters would have been looking for food after the harvest, in preparation for winter. The annual Hunter's Moon is the full moon that follows the Harvest Moon (which itself is the full moon closest to the autumnal equinox).

Ordinarily, the moon rises about 50 minutes later each day than the previous day. This means that the different phases of the moon always show up during different times of the day and night. According to EarthSky, the Hunter's Moon rises quicker though, just 30 minutes after the time it rose the day before, for a few days around the actual full moon. This happens because the moon's orbit is not perfectly circular, and at this time it forms a more narrow angle than usual with the evening horizon (thus coming into view after less relative motion in the sky).

Now, honestly, most of us would probably never notice something like the moon rising a little more quickly than it is supposed to. But what you would definitely notice is a giant glowing red moon, and that's the other more apparent feature of a Hunter's Moon. The moon itself doesn't change colors throughout the year, of course. What makes the Hunter's Moon look red is the fact that you view it through the thicker atmosphere lower in the sky, instead of through the thin atmosphere in the higher-up sky. And the best part is that you don't have to do anything special to see the Hunter's Moon — this phenomenon is visible to the naked eye.

To top things off, this year's Hunter's Moon is also a "supermoon." Also according to EarthSky, a supermoon happens four to six times per year, when the moon comes closer than usual to the Earth at the same time as a full moon. The result is a brighter, maybe slightly larger-looking moon, and stronger tides. On Sunday night, Oct. 16, the moon will reach its closest distance to Earth in this cycle, but the fullness will have already peaked on Saturday, Oct. 15.

Feeling newly interested in astronomical happenings? Stay tuned for another big one. Though it's not a Harvest Moon (and will therefore not glow red), on Nov. 14, we'll enjoy the closest supermoon to happen since 1948. Shine bright like a diamond, moon.