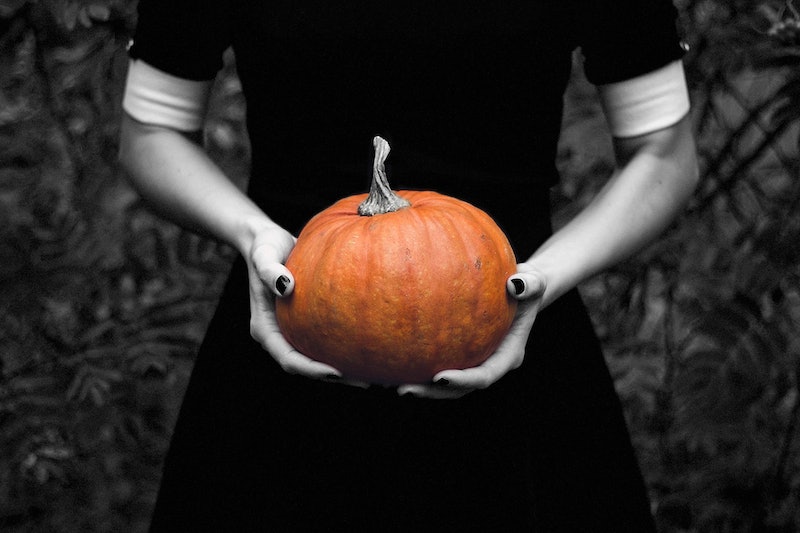 There really are only so many times you can listen to Thriller before the creep factor starts to wear off, no matter how much you love Halloween (the same goes for Monster Mash, This is Halloween, and Dead Man’s Party, by the way). Which is why you’re going to love these totally chilling audiobooks for getting you in the Halloween spirit — perfect listening to accompany all your favorite Halloween activities, and recommended by some folks who know their audiobooks pretty well: Audiobooks.com. Whether you spend the days leading up to October 31 carving pumpkins, frosting festive cookies, stringing orange twinkle lights, or putting the final touches on your Halloween costume (who else is going as Pikachu this year, BTW?) this blend of thriller, horror, and mystery audiobooks will have you thoroughly creeped out in no time — which is exactly what you’re going for this time of year, right? And hey, if being totally terrified isn’t exactly your thing, an audiobook is still easy listening compared to sitting through 90 minutes of Freddy vs. Jason with all the lights turned off.

Check out these 10 terrifying audiobooks, perfect for getting you in the Halloween spirit — and maybe scaring the sh*t out of you too. Just a little.

1. Ink and Bone by Lisa Unger

Lisa Unger’s psychological thriller Ink and Bone introduces listeners 20-year-old Finley Montgomery, a woman who has always been able to see into the future — dreaming of events before they happen and exhibiting strange, uncontrollable supernatural powers. But when Finley moves to her grandmother’s hometown in order to learn to harness her powers, she realizes there might be more to her “gift" — and to her new home, The Hollows — than meets the eye. Then Finley becomes involved in a dangerous investigation involving a missing girl, and things really start to get creepy.

The seventeenth century meets the future in Black Spring, a Hudson valley town where a medieval witch wanders into homes to stand over the beds of sleeping children, and high-tech surveillance has allowed the town to self-quarantine in hopes of isolating their haunting curse. But when the teens of Black Spring spread their story — and that of the Black Rock Witch, whose eyes and mouth are sewn shut — all over the internet, they unwittingly spark a chain of events that isolate their town from the rest of the world even further.

3. Cradle and All by James Patterson

Two immaculate conceptions, followed by worldwide droughts, famines, floods, and disease epidemics set the stage for James Patterson’s Cradle and All, a suspenseful mystery thriller about two women linked by their virgin pregnancies, and one Anne Fitzgerald, a nun-turned-private investigator whose job it is to discover the origin of the pregnancies, to save the young women from the forces of darkness that threaten them, and — oh yeah — to make sure mankind isn’t overrun by evil. All in a day’s work.

From the master of the scary story himself is this collection of science-fiction and horror short stories that will have you diving under the covers in no time. From the small town of Bridgton, Maine, which is suddenly plagued by a dark, monster-filled mist (in The Mist) to the equally small town of Castle Rock, where 11-year-old George Bruckner realizes the grandmother he has been entrusted to care for alone is actually an evil witch (in Gramma), you’re in for one scare after another.

When travel journalist Lo Blacklock is given a dream assignment — a week on an exclusive, luxury cruise — she expected nothing but blue skies and sparkling seas. But a few days into the trip the weather turns grim, and then Lo witnesses something she can’t account for: a woman being thrown overboard, into frigid, choppy waters. However, it seems all the passengers remain on board, and the crew ignores Lo’s concerns. But the journalist knows something must have happened — right? So what did Lo really see?

Part murder mystery, part psychological thriller, Iain Reid’s I’m Thinking of Ending Things takes place on the most typical of weekends: a guy is driving his gal to his hometown to meet his parents. But Jake — the guy, and his gal — known only as “The Girlfriend,” are anything but a typical couple. Jake’s parents live in a remote, and somewhat eerie farmhouse, and after the meeting Jake takes "The Girlfriend" to his now-abandoned old high school. If all that’s not weird enough, it's at the school that things really start to spiral out of control.

When 13-year-old Tommy Sanderson disappears from a local park, his mother and sister struggle to understand how Tommy could have vanished without a trace — and why investigations aren’t uncovering any leads. But Josh and Luis, the friends who last saw Tommy when the three hung out together at a local landmark nicknamed Devil’s Rock, don’t seem to be telling the whole truth about the night Tommy disappeared. And when Tommy’s mother begins to think she sees Tommy’s ghost around the house, and pages from the teen’s diary begin to mysteriously appear, things go from terrifying to sinister.

8. The Loney by Andrew Michael Hurley

When a child’s remains are discovered along a remote and desolate stretch of coastline, known by locals as the Loney, a man named Smith finds himself grappling with the events he witnessed there almost 40 years earlier, when his mother brought Smith and his disabled older brother to the Loney in search of ritualistic, religious healing. Smith might be the only person who knows the terrifying truth about the child’s remains, and what happened at the Loney all those years ago — but bearing the weight of that truth alone might be too much for him.

9. The Fireman by Joe Hill, narrated by Kate Mulgrew

When a disease known as Draco Incendia Trychophyton, which causes its victims to spontaneously combust, begins to spread across the world, no one is safe; especially since the disease has no cure. Harper and Jakob Grayson promised each other that if either were infected, they would end their lives in order to save the other from the disease. But now Harper has it, and since she’s pregnant, she wants to live long enough to give birth to her child. But Jakob is convinced Harper is going to get him sick, and he abandons her. Then groups known as Cremation Squads begin roaming communities, killing anyone who is infected. But through it all Harper finds hope in one man — one who is infected, but who has learned to harness his disease and control the fire, and it is him she must turn to now.

10. The Couple Next Door by Shari Lapena

This New York Times bestseller tells the story of Anne and Marco Conti, a couple who seem to have it all — that is, until they attend a dinner party at their next door neighbors’ house and leave their daughter Cora home alone in her crib, only to return home and discover that the infant has disappeared. Detective Rasbach arrives on the scene and knows almost immediately that the couple is hiding something from him. What he doesn’t know is that they’re also hiding things from each other — and have been for years. This mystery thriller will keep you listening all the way to the shocking twist at the end.