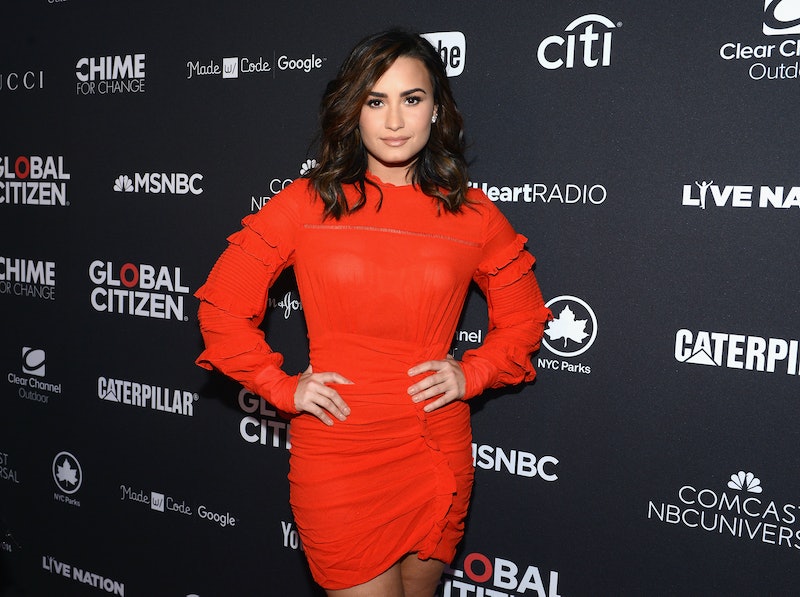 Blonde hair, don't care! Demi Lovato went blonde and it's a major change for the singer and actor. But it's not a brand new or never-been-done look for her. She has been blonde before. Actually, Lovato has been a hair chameleon through the years, rocking various shades of pink and blue, along with dip-dyed locks, as well as brunette and blonde. She goes short, long, wavy, and straight. Lovato even launched her own line of colored hair extensions. So her commitment to swapping out her locks and having fun with her follicles is undeniable. Lovato has rocked a brunette bob and then a lob consistently for a while, adding length for her summer tour. Of course it was time for her to switch things up with a buttery blonde hue. Is Demi Lovato's blonde hair real?

Since Lovato went lighter and appears to have added some length, chances are her blonde hair is the work of a wig or extensions. She is also rocking an ombre blonde. In her selfie, the ends are brighter and whiter than the hair at the top of her head. Granted, that could be lighting. But the ends appear noticeably whiter than the rest of the hair.

Observe Demi Lovato, back to blonde. It's a smoldering contrast to her sultry dark eyes, lashes, and brows.

Lovato is naturally stunning as a blonde, isn't she? She clearly has more length here, so it could be that she dyed her natural locks and then added blond extensions. There are plenty of possibilities here. But that's my best guess.

This was Lovato just two weeks ago, rocking a brown lob with highlighted ends.

A few weeks ago, Lovato rocked longer curls, though.

As previously noted, she had been wearing mega long extensions while on tour with Nick Jonas.

Lovato went with mega long, stick straight strands for her Glamour cover. So she is still changing her locks with frequency.

Lovato opted for blond hair and bangs during her time on The X-Factor a few years back.

I am thinking Lovato's latest pitstop at blonde hair is a mix of her real hair and extensions.