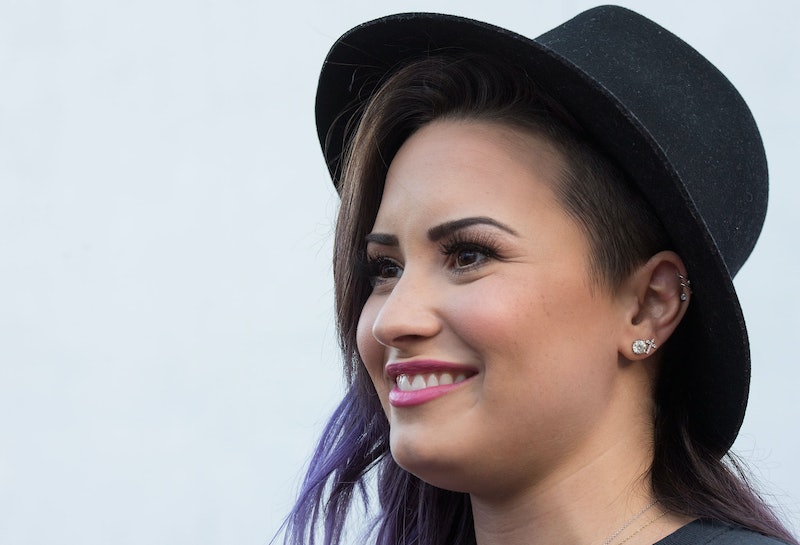 Demi Lovato is a style chameleon and a loyal and ardent defender of the Miley Cyrus faith. Like literally, when it comes to her hair, Lovato is always changing. The mermaid lover is constantly switching hues and cuts.

The "Really Don't Care" singer is not afraid of making drastic changes to her look with incredibly frequency and seemingly out of nowhere. She has a whim? She indulges it.

Lovato has had plenty of drastic style and beauty moments and as previously stated, most of which relate to her ever-changing hair color.

It's like you shouldn't get used to Lovato with hot pink locks or a rainbow hue, since she will likely ditch it in a few days. Hopefully she has some stock in Kerastase or insert-other-luxe-conditioner-brand here, since these dye jobs aren't exactly healthy for hair.

But one key reason the singer and actress is able to change her hair so drastically because she often wears black, rocker chick outfits, which pair well with any color not found in nature that she chooses to dye her hair. So while she is a chameleon with her hair, her wardrobe often sticks to monochromatic and mostly black, or largely in that color range.

But there is no boring or basic bitch black when it comes to Demetria Lovato. She embraces leather, studs, and necksnapping length with her heels.

While she may be hard to keep up with, these are some of Demi Lovato's most drastic style swaps. Her style fearlessness is why I think she is an "It" girl in 2014.

Lovato just posted this pic and it's what got my hamster wheel spinning about her ever-changing 'do. She's brown, purple-tipped, side-shaved, and a bit shorter. Unless that's an optical illusion. It's drastic because it refuses to pledge allegiance to one cohesive style. I'm also loving her really long, really curled, and really spaced lashes.

2. Even Pop Singers Get The Blues

Lovato wore turquoise blue hair a few times. Here, it was blue all over. Not dip-dyed. Not extensions. Not temporary. It was drastically and awesomely blue.

Again, when Lovato went pink, she went pink. Hot pink. The hottest pink in existence. She also shaved the sides and did the punk rock undercut, furthering the drastic quotient. She didn't stay pink too long, though.

4. Blondes Have More Fun But Not As Much Fun As Demi Lovato

Lovato was buttery blonde and bombshell-y with her red lips and almond-shaped, dagger nails, but for her, this shade was semi-boring. While dudes may think blondes have more fun, Lovato has way more fun when she is blue, pink, purple, and and any other color that requires several processes and essentially strips the shaft.

Lovato has "Stay Strong" inked in script on her wrists, a testament to her survival and overcoming her personal issues. She has been the poster girl for dealing with addiction and self-harm, so that tattoo has serious meaning. But then she went and sprinkled a lot of birds on her arm. Those are not easy to hide or cover. There are several. They are prominent. Therefore, they are drastic.

To support one of her X Factor charges, Lovato wore matching leopard spots on the side of her face. It was a temporary applique, but she looks like she could have played a part in some sci fi film where her character was half-female, half-leopard. Rawr!

Lovato was walking wounded when she injured her leg in a fall at her house. She dressed up the cast with pyramid studs because of course she did and still rocked leather rocker chick duds. Her slicked back, maj long pony, and crimson lips were extreme and severe, but she owned it. Since that's what Demi does. She doesn't rent; she owns.

Any starlet with a glamour army can rock a greaser's pompadour. But few can do it with golden locks like Demi Lovato did. Yep.

Lovato's crimson curls were likely assisted by extensions but it was memorable look, due to the color and the Rapunzel-like length.

Despite Lovato making a commitment to a fully blue head of hair at one point, her dip-dyed tips and studded, leather jacket, which she could have borrowed from Judas Priest's Rob Halford, transformed her into a heavy metal mermaid.