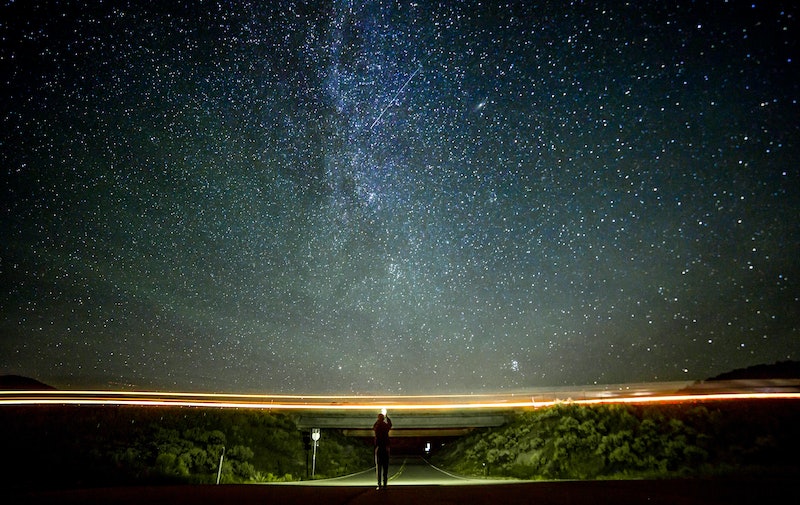 In case you haven't heard, the Orionid meteor shower is almost here! For a lot of celestial events like the Black Moon, it's hard to predict whether or not you're actually going to see anything cool; oftentimes, you don't. But if you're trying to find out how to see the Orionid meteor shower, I've got good news: This one should be pretty easy to see, and it doesn't matter where you live. It's not always the case that everyone in the world can enjoy the meteor shower, but this time, it is

Before I get into the details of how and when, though, let's talk a little bit about what the Orionid meteor shower actually is. At some point during grade school, you probably learned about the constellation Orion the Hunter. That's actually where the Orionids get their name: When the meteors from this particular shower fall, they look like they're shooting out of Orion's sword. But the meteors don't actually originate from the constellation; rather, they are bits and pieces of Halley's Comet, which passes Earth only once every 75 years or so.

Like I said, many of these starry phenomena can be hit-or-miss. Sometimes, you might get a magnificent starry show that lights up the sky for hours, while other times you might not see anything at all. Apparently, the Orionid meteor shower is known for being one of the brightest; it'll be visible pretty much anywhere as long as there is a clear sky and you're away from city lights. This means it shouldn't take a lot of work on your part to spot a few shooting stars.

The Orionid meteor shower is actually already underway, having begun on Oct. 2, 2016. It's a long one that will continue until early November, though, with the best days to view it with our human eyes being Oct. 20 and 21. So, ready to let out your inner astronomy geek go wild? Here's how to up your chances of seeing the Orionid meteor shower this year:

1. Circle The Date On Your Calendar

You've got a few days to plan ahead and make sure you don't mix up the dates (and, of course, to get excited!). The good news is, even though you're most likely to spot some starry magic when the shower peaks on Oct. 20 and 21, the whole thing will last until Nov. 7. Who doesn't want multiple chances to see a shooting star?

2. Set Your Alarm To The Right Time

The best times to see the Orionids are just after midnight and right before dusk. Yes, the times are somewhat inconvenient for our 9-to-5 lives, but it'll be so, so worth it.

Nobody ever succeeded at stargazing by staying in a well-lit area, so take a drive out of town until you find a nice grassy field or other patch of deserted land. That way, you can lie down spread-eagled and fully appreciate the sky as it glows in the dark. Just don't forget the bug spray.

This year, the Orionid meteor shower is expected to produce about 20 meteors an hour (that's not a lot, but like I said, Orionids are often some of the most shimmery meteors in the sky). If you're in the Northern Hemisphere, look southwest and and if you're in the Southern Hemisphere, look northwest to find Orion. Once you've pinpointed Orion the Hunter and his sword, where the meteors are most likely to be, don't look directly at Orion. It sounds counterintuitive, but there's no need to squint too closely at any one part of the sky because otherwise you might miss them. One more tip: Orionids are pretty swift, so try not to blink more than you need to. Happy stargazing!

More like this
What Is The Forest Personality Test? The TikTok Trend, Explained
By Georgina Lawton
17 Creative Bridal Shower Gift Ideas For Any Type Of Bride
By Marilyn La Jeunesse
The 6 Best UV Umbrellas, According To A Dermatologist
By Rachael Green
The 8 Best Indoor Door Mats For Your Home
By Jenny White
Get Even More From Bustle — Sign Up For The Newsletter