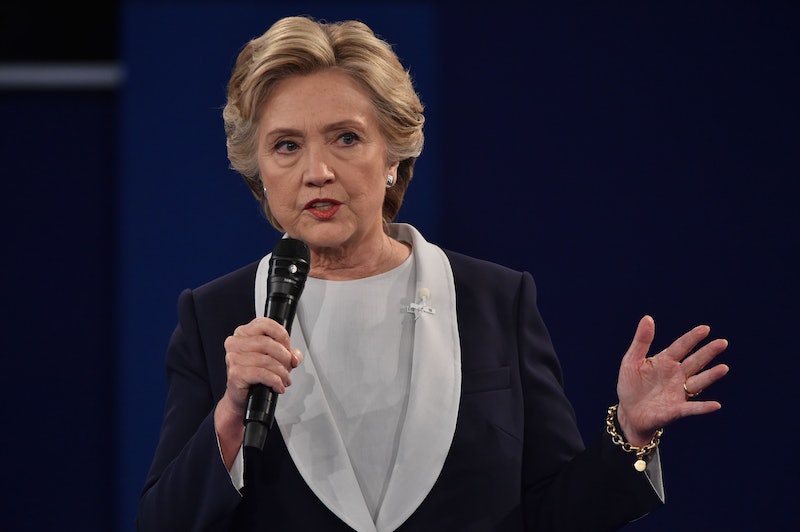 As with any political candidate, there are plenty of reasons that you might not support Hillary Clinton. Maybe you don’t like her tax proposals, or her decisions as Secretary of State, or her healthcare plan. You’re entitled to your opinion. But a recent letter to the editor about Hillary Clinton offers a different take on why the first woman to be nominated for the presidency by a major political party isn’t fit for office: What if she’s on her period? How can we trust someone to make decisions for the nation when she could be consumed by irrational rage hormones at any moment?!

This Extremely Important Question comes courtesy of a reader of the Sun Gazette in Williamsport, Pa. Last week, the paper published a letter to the editor in which the writer attacks “liberals and Obama” on a variety of fronts, accusing them of “taking away freedom of speech,” “taking our guns,” and generally supporting policies that are “code for socialism.” Leaving these issues aside (as well as the claim that Donald Trump is the person to fix things because he is an “everyday guy,” a phrase I would not have thought to apply to someone who owns multiple skyscrapers with his name emblazoned across them), let’s focus on what the letter writer says about Hillary Clinton specifically: “They call us sexist just because we are critical of Hillary Clinton and her health. What if that time of month comes and she is sick at the same time?”

I cannot believe that in 2016, I’m having to explain that a president who menstruates will not, in fact, release the U.S. nuclear launch codes in a fit of PMS fury, but here we are. Read on for five reasons that a female reproductive system should not disqualify someone from the presidency:

Clinton, in her late 60s, probably does not menstruate, which is beside the point anyway.

As a number of Twitter users have pointed out, Clinton, who turns 69 later this month, has probably already undergone menopause (not that her reproductive status is our business in the first place). I hesitate to say, “She’s too old to have periods, anyway,” because it doesn’t matter whether Clinton is still menstruating or not — either way, it would not affect her ability to do her job or make decisions. However, I think it is worth pointing that her age makes the letter writer’s concern nearly nonsensical, if only because it shows that he doesn’t appear to have a clear understanding of women’s reproductive cycles. And if you don’t even know the very basics of how menstruation and menopause work, you don’t get to make statements disqualifying an entire gender — roughly 3.5 billion people — from holding public office.

We already know that women can menstruate and hold public office without burning down the government.

Regardless of Clinton’s current reproductive stage (which, again, is none of our business), she’s been in politics for 30 years, and, as far as I’m aware, there’s no record of her becoming unstable or unfit for her job every 28 days. And if one example isn’t enough, we currently have 104 women in Congress, and it’s fair to assume that at least some of them have held their positions while also menstruating. As far as I can tell, there isn’t a red tent inside the U.S. capitol where congresswomen go to wait out their periods — instead, they continue to do their jobs and live their lives. You know, just like every other person who menstruates.

Research shows that women’s political decisions are not affected by their periods.

It’s kind of depressing that this type of research even needs to happen, but here’s some data for you: A 2015 study surveyed 2,000 women about their political leanings and reproductive cycles and did not find any connections between the two. “We found no evidence of a relationship between estimated cyclical fertility changes and conservatism, and no evidence of an interaction between relationship status and cyclical fertility in determining political attitudes,” the authors wrote. As such, we don't need to worry about Clinton's policies changing depending on whether she's menstruating, because it's just not going to happen. (Again, I can't believe I actually have to spell that out, but, well... here we are.)

Men have hormones, too, and no one seems to find them unfit for office.

Men may not have hormonal cycles that are as easily identifiable as women’s, but they are still affected by fluctuations in hormone levels. Research suggests that some men experience many PMS-like symptoms on a regular cycle. Men also experience hormonal changes as they get older than can affect them on physical and emotional levels. And a 2015 study found that excess testosterone can make men act irresponsibly and impulsively.

I’m not trying to suggest that these hormonal changes in men disqualify them for office. But to assume that women are the only ones who are at times subject to hormonal shifts is simply untrue. Hormones are powerful, all humans have them, and yet somehow we manage. Let’s not penalize one gender for something everyone experiences.

People have been using menstruation and menopause to justify keeping women out of government for a very long time. When American women campaigned for the vote in the late-19th and early 20th centuries, a common rebuttal given to calls for women’s suffrage was the argument that women are too irrational to have a say in government. The logic was that women are so swayed by their hormones and emotions that they can’t be trusted to make decisions for themselves. In 1873, Orestes Brownson, a prominent intellectual and writer, argued, “As an independent existence, free to follow her own fancies and vague longings ... without masculine direction or control, [a woman] is out of her element, and a social anomaly, sometimes a hideous monster.” Scary, right?

In 1970, Dr. Edgar Berman, a member of the Democratic Party’s Committee on National Priorities, responded to U.S. Representative Patsy Mink’s assertion that a woman could be president by arguing that women are subject to “raging hormonal imbalances” and therefore unfit to lead. “Suppose that we had a menopausal woman President who had to make the decision of the Bay of Pigs or the Russian contretemps with Cuba at the time?” he asked. Such a president could be “subject to the curious mental aberrations of that age group.” (Mink later forced his resignation.)

Lest you think, “Yeah, but that was 46 years ago,” look at our current election cycle: It’s not only private citizens writing into their local papers who see periods as a disqualifying factor. You need only look as far as the Republican nominee for president — who in 2015 suggested that a female debate moderator was incompetent because “You could see … blood coming out of her wherever” — to see women’s basic reproductive functions being used as weapons against them.

If you don't like Hillary Clinton, that's your right. But judge her by her policies, her job performance, her work, not the fact the she has a female body that does the things that female bodies do.