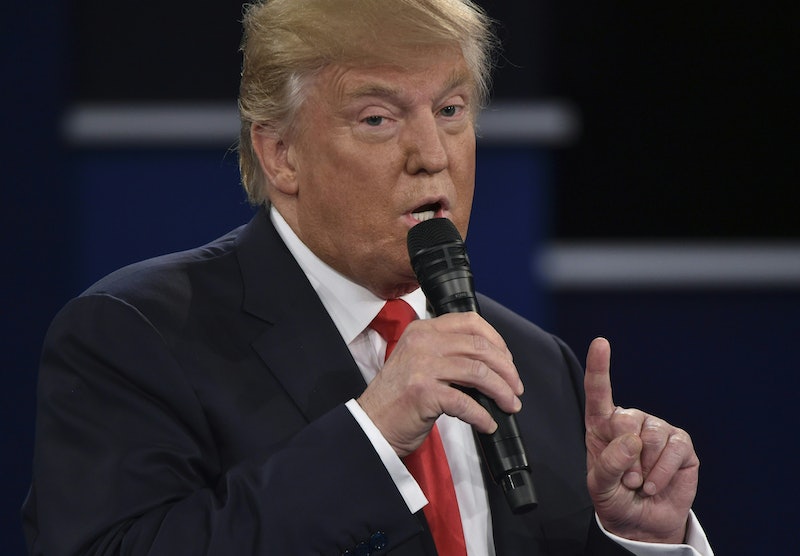 After a video of Donald Trump making misogynistic comments leaked and he excused them as "locker room talk," many denied that this kind of speech was normal in locker rooms, politics, or anywhere. But in an episode of her web series The Dirty Word titled "The Truth About Donald Trump," linguist Amanda Montell argues that Trump's comments actually do reflect a very common custom — and that's why they're even more harmful than we're acknowledging. His objectification of women, she explains, is actually a sexist strategy that men use to bond — "locker room talk," as he puts it. And the prevalence of this kind of talk, whether or not it occurs in actual locker rooms, reveals a much bigger issue about how our culture views and treats women.

"Most of the commentary that has been published since the release of Donald Trump's 2005 recording has painted him as a unique misogynist monster," Montell tells Bustle over email. For example, athletes rushed to Twitter to deny that such talk goes on in locker rooms, and people used the "Locker Room Talk In 5 Words" hashtag to talk about what kind of talk should be happening in these settings.

While these reactions are correct in identifying that there is no excuse for saying you can do whatever you want with women if you're famous — and, indeed, may also be accurate in terms of what individual people actually talk about in locker rooms — where they go wrong is in painting Donald Trump's attitude or speech as abnormal or an outlier. "Linguistically speaking, there's something much more insidious at play," Montell explains to Bustle.

Here's what Trump's "locker room talk" was really doing, according to Montell, and how it reflects a larger pattern.

"What he's doing is not boasting. It's actually something more deliberate than that," Montell explains in the video. She cites a blog post by linguist Deborah Cameron explaining that Trump's story about making a move on a married woman and failing, and his claim that he can do whatever he wants with women both have the same function: Making someone (in this case, Billy Bush) feel like part of a group. While it may seem like Trump was boasting, Cameron points out that the first part was actually the opposite. By sharing that story, Trump was conveying that he trusted Bush enough to tell him something embarrassing. Then, by saying he could "grab them by the p*ssy," he was conveying that he trusted him enough to say something inappropriate to him that he wouldn't want others to hear.

This Kind Of Talk Establishes Woman As Outsiders

Cameron calls Trump and Bush's conversation "male gossip" because gossip serves to establish some people as insiders and others as outsiders. In this particular form of gossip, the insiders are men, which means the outsiders are women. "This whole conversation isn't just meaningless lewd banter. It serves a purpose," Montell explains in the video. By saying things that they would never say around women and that overtly insult women — like "she’s now got the big phony tits and everything" — men establish women as the "other," in that conversation and in society. By objectifying women, men make it easier to mistreat them, she explains.

"Trump is not the only one guilty of this," Montell explains. "This 'locker room banter,' as he calls it, does indeed happen in many places where men gather, from frat houses to brokerage firms to political offices." But that doesn't make it OK. In fact, the commonality of this kind of conversation is what makes it insidious, since it "reinforces the idea that that sort of thing is A-OK," Montell says. Or, as Cameron puts it, "it is a social practice supporting a form of fraternity that stands in the way of women’s liberty and equality." And because it is so normalized, it imposes barriers on equality everywhere — not just on the Access Hollywood set and not just in locker rooms.

As Montell puts it to Bustle in an email, "Trump's speech works to perpetuate sexism by normalizing casual banter surrounding sexual assault. By writing it off as locker room talk, he's not excusing the problem, he's naming it."

Watch the full video above.

More like this
15 Halloween Costumes Inspired By TikTok Trends
By Emma Carey
Why TikTok Is Obsessed With Caesar Salads Right Now
By Alexis Morillo
Behind The Hilarity Of The "POV: You Walk Into My Room" TikTok Trend
By Lexi Inks
Why TikTok Is Flooded With Controversial Videos About "Pick Me Girls"
By Courtney Young
Get Even More From Bustle — Sign Up For The Newsletter