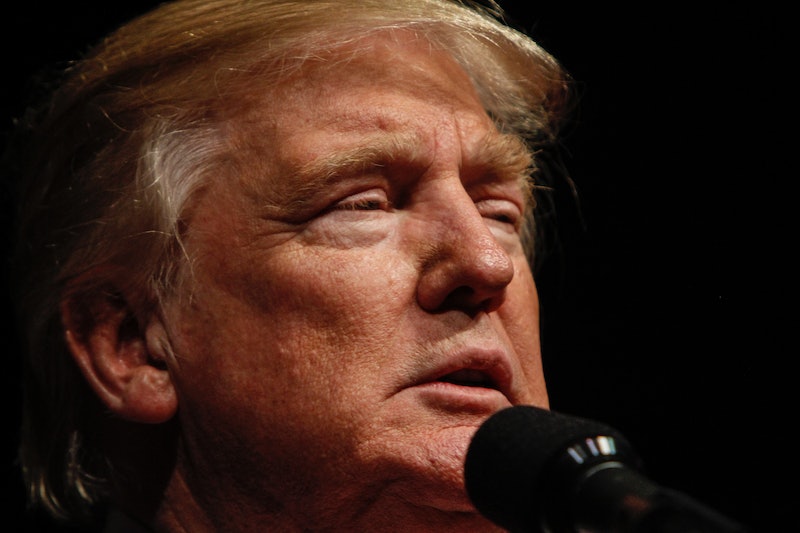 Anyone who's been following Donald Trump's campaign for the past few weeks — actually, since he first announced his bid to run in June 2015 — is probably not surprised to see him attempting to explain his way out of an issue with arguments that only make it worse. Trump recently saw numerous allegations of sexual assault being brought against him from several women, and he has since denied all of the allegations in question, calling them "fabrications." And he and his surrogates have been on a mission to subdue these stories, not just by calling into question the credibility of the women behind the accusations, but by telling the public that this is a trivial issue to waste our time discussing

This is a candidate who pointed to his financial investments as forms of sacrifice after Khizr and Ghazala Khan, parents of a Muslim-American soldier who died in combat, criticized him at the Democratic National Convention for not having sacrificed anything in life. From his statements about Judge Curiel's Mexican heritage to his Twitter attacks on former Miss Universe Alicia Machado and his recent attacks about the physical attractiveness of the women accusing him of sexual assault, Trump has repeatedly demonstrated an incredible talent for choosing the most unreasonable and inexplicable lines of attack to defend himself.

Recently though, he's had more help than usual from surrogates who want to steer the American public's attention away from allegations of Trump groping and kissing women against their will. The excuses members of his campaign staff are peddling each have their own unique twist on the concepts of reality and decency, but there is one similar theme that runs through them all: At the end of the day, we all need to forget about this topic and focus on the "Important Issues."

This has been a go-to argument since Trump released his video apology for the infamous recording of his and Billy Bush's vulgar comments about women. "This is nothing more than a distraction from the important issue we're facing today," he said in his statement. His own wife's condemnation ended with by saying, "I hope people will accept his apology, as I have, and focus on the important issues facing our nation and the world."

Frequent gaffe-maker Ben Carson also drove home the point of how little regard the Trump campaign has for this topic when he said that it ultimately "doesn't matter" whether Trump's accusers are telling the truth because we need to get back to the serious problems in our world. "It doesn't matter whether they're lying or not," he said. "What matters is that the train is going off the cliff. We're taking our eye off of that and we're getting involved in other issues that can be taken care of later."

This tactic can be seen demonstrated by the majority of Trump surrogates who attempt to save their candidate from the mess he's currently in, and every single instance can be seen as an insult to any person who has ever been a victim of sexual assault. To imply that sexism is a trivial issue, as McEnany, did, is an insult to any woman who exists in this country. It's an insult to McEnany herself, even if she doesn't realize it, since she is not immune to the rhetoric she spouts, no matter how much she'd like to think that Trump and others like him would treat her as an exception. Misogyny is a weapon against all women, even those who defend the men who benefit from it, and a woman's chances of being harassed or treated as inferior to the men around her are not lessened by being on their side.

The fact that the Republican nominee's campaign is continuing to peddle these kinds of justifications for his behavior is baffling. With reports of Republican women deserting the party en masse and studies showing an almost completely blue electoral map if women were the only voters in the country, one would think that these would be sufficiently warning signs to make the Trump Train change its course. Yet the rhetoric has not changed even slightly.

A party without the support of anyone other than white men can't survive. In a serendipitous way, because of its inability to recognize facts like this, it's starting to look like the unlikely Trump campaign might truly be the beginning of the end of the GOP.

Sexual assault, abuse, and harassment is a widespread problem that can lead to depression, lifelong trauma, and suicide. It is not a minor problem. There is no strong argument as to how this societal epidemic is of less importance than those of health insurance, the economy, immigration, and all the other things the Trump campaign wants voters to talk about.