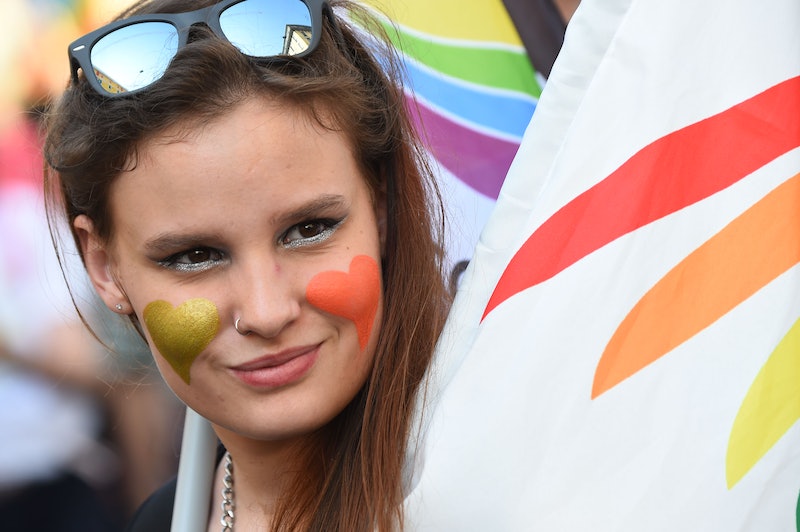 Though the LGBTQ community now has more rights and protections than ever before, some places are definitely safer to be out than others. The Human Rights Campaign's 2016 Municipal Equality Index, however, details the most LGBTQ-friendly cities in the United States, showing how 500 cities in the country rank in terms of their policies and inclusive practices for the LGBTQ community. Whether you identify as LGBTQ yourself or whether you're an ally, it's definitely important information to know.

Social tolerance is absolutely a factor for how LGBTQ-friendly a place is, but for the LGBTQ community at large, what makes a space friendly often goes beyond simply an atmosphere of acceptance. For example, you can still be fired for openly identifying as LGBTQ in 22 states in the country, and in 32 states, you can be fired for being transgender. This means you risk being fired if, for example, you marry your same-sex partner and your boss finds out, or if a coworker finds evidence of your sexual orientation or gender identity on social media. No matter how accepting your neighborhood might be, this risk might cause many LGBTQ people to classify a city as unsafe.

But the good news is that many places are doing it right, both socially and legislatively. You can check out some of the top scoring cities on this year's Municipal Equality Index below — all of them received a score of 100, making them incredibly LGBTQ-friendly indeed. Be sure to check out the full report from the Human Rights Campaign here.

Often known as a college town, Ann Arbor is also a super LGBTQ-friendly city! There are plenty of gay bars and lots of LGBTQ-focused community groups; it's even one of the best places to raise a family for same-sex parents. And it's really pretty in the fall, to boot.

Boston is one of the more liberal cities in the country, so it's not a huge shocker to see that it received a perfect score on HRC's rankings. Boston is a hub of LGBTQ culture and has plenty of queer visibility in terms of the arts, music, and nightlife. It's also a stone's throw from Provincetown, long regarded as an LGBTQ haven for vacations.

Baltimore has many historically gay neighborhoods that are still known for their LGBTQ friendliness today, such as Mount Vernon and Hampden. Baltimore also frequently holds LGBTQ-centric festivals, like Pride parades and queer film showings, which attract a great crowd.

While the Midwest doesn't necessarily scream "LGBTQ friendly" at first glance, Iowa City is a hub of queer culture. In fact, Iowa City has ranked in the "top gayest" cities in the United States over multiple years, which is an endorsement if I've ever heard one.

Philadelphia regularly makes it into the top 10 cities for the queer community, and it's no surprise as to why. Philadelphia has a thriving queer scene with a high-percentage of LGBTQ people, a relatively low percentage of LGBTQ-related hate crimes, and plenty of queer-friendly safe spaces, like bars and community spaces.

Olympia may not be as well known as other Pacific Northwest cities, like Seattle and Portland, but it's seriously great for the LGBTQ community, as well as being a hub for culture and the arts. Olympia regularly ranks as one of the most gay-friendly cities in Washington state, and does pretty darn well nationwide, too!

Similarly to Iowa City, many people are surprised to hear that Madison is a great place for the queer community — but it totally is. Madison has a high percentage of LGBTQ-identified people and plenty of queer safe spaces available.

Be sure to check out the full list over at the Human Rights Campaign!

More like this
The 19 Best Tweets & Memes About Bisexual Awareness Week
By Lexi Inks
Why A Libra & Capricorn Couple Will Have A Difficult DTR Conversation
By Kristine Fellizar
An Honest Review of MeUndies Boxers, According To A Non-Binary Person
By Megan Lasher
Pro Footballer Zander Murray Is "Blown Away" By Support After Coming Out
By Sam Ramsden
Get Even More From Bustle — Sign Up For The Newsletter