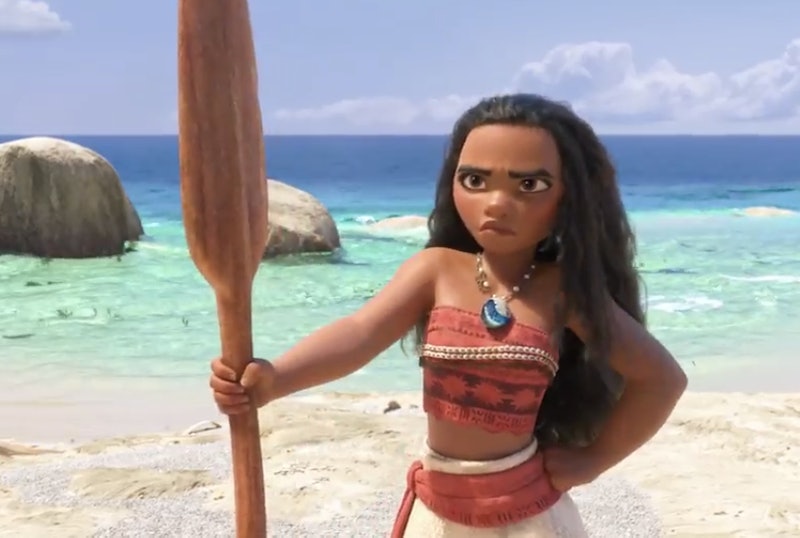 Disney's latest princess is set to avenge her own island with or without her sidekick (who also happens to be a demigod), Maui, by her side. In fact, in the latest clip from Disney's Moana , the titular protagonist is setting the record straight on who the real hero is — by standing up for herself. The clip, released on Twitter by the voice of Maui himself, Dwayne Johnson, shows Moana addressing the demigod by his formal name. However, after being interrupted and corrected numerous times by Maui, Moana suddenly has to knock some sense into him. She hits him with her oar and says, "You are not my hero. And I'm not here so you can sign my oar."

While, on the surface, this dialogue may seem like nothing more than a comical first meeting between the egotistical demigod and the film's main protagonist, it also strikes me as a conversation way too familiar for women throughout time. After watching the clip, it becomes clear that Moana is already a role model for the likes of women everywhere, especially for every woman who has ever had a man treat his right to speak as more important than hers.

Maui and Moana's conversation, at least Maui's side of it, can actually best be described as a classic case of "mansplaining." Just take a look at Bustle writer Lara Rutherford-Morrison's "mansplaining" definition.

"When a man 'mansplains' something to a woman, he interrupts or speaks over her to explain something that she already knows — indeed, something in which she may already be an expert — on the assumption that he must know more than she does."

Maui interrupts Moana, corrects her before hearing all of what she has to say, reasserts his position over her, assumes she's a fan, and even takes time to clarify his respect for women. In that way, he sounds like every egotistical male that women encounter on a daily basis, and I'm sure learning to be more humble and open will be part of his character development. Even if you happen to disagree with the idea that Maui is "mansplaining," then I'm sure that there's one thing you can agree with: how blatantly annoying the way he's interrupting her is. This exact form of down-talk happens all too often in real life, especially to women.

So, thank you in advance, Disney, for subtly pointing out one of the struggles that affect women in particular on a daily basis, whether it was intentional or not. Moana swims into theaters November 23.