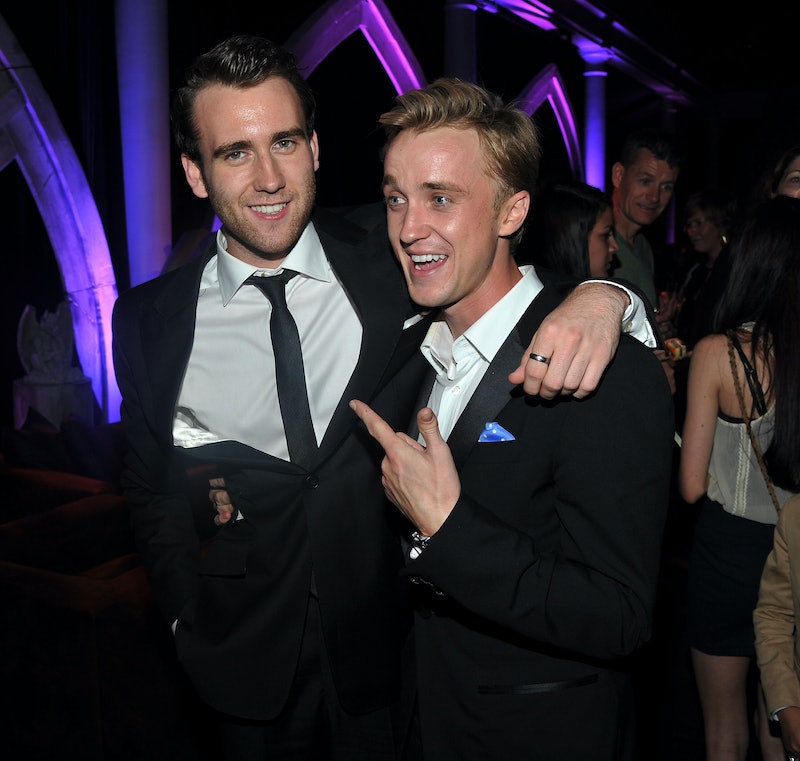 There are few things I love more than fandom crossovers and celebrity tattoos, so the photo of the actors who play Neville Longbottom and Eleven hanging out that came out recently couldn't possibly have been more up my alley. We got Harry Potter and Stranger Things colliding in a beautiful, nerdy inferno, and we got everyone's favorite boy-wizard-turned-bonafide-hunk pointing at his tattoo, suggesting he got it in honor of the hit Netflix show. But what does Matthew Lewis' tattoo really mean? It's tempting to believe the joke that he wrote in the caption — that he got the Roman numerals XI inked on his inner right forearm in honor of Millie Bobby Brown's character — but, if it seems too good to be true, that's because it is.

As much as I'd love it if Lewis loved Stranger Things so much that he had to document it forever on his arm, the number 11 actually has its own very different significance for him. As far back as 2008, the fan site LewisLovers reports that the actor told an interviewer at DragonCon that 11 was his "football squad number," which, for us American No-Majs, means that he wears the number 11 on his soccer jersey. And that it's a number that will never change, because it indicates that he plays left midfielder or "winger."

And, as if that connection to a sport that's really important to him wasn't enough, in 2011 Lewis told the radio station WBEZ 91.5 Chicago that 11 is also the age he was when he first auditioned for Harry Potter. Which, as we all know, completely changed his life forever. It's clearly a very significant number for the actor.

So even though we don't get the strict fandom crossover that maybe some of us were hoping for — guilty — the real story actually reveals a lot more about Matthew Lewis and the things that are important to him. And, hey, if it means that two of our favorite characters from disparate franchises have a connection that they can talk about while hanging out, then so much the better.