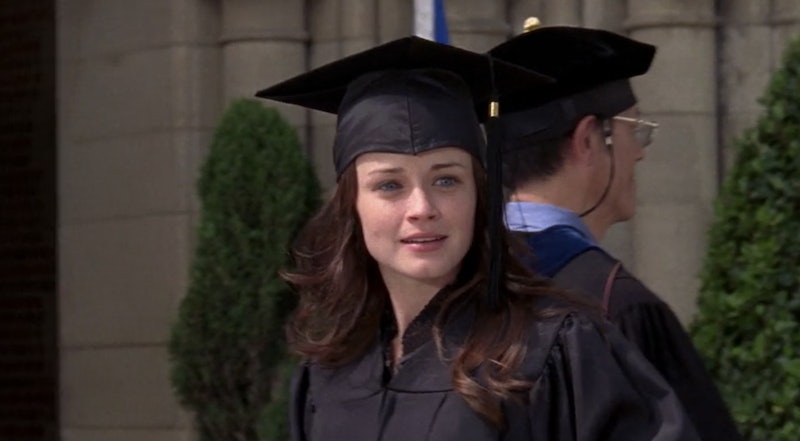 While both halves of the Gilmore girls go through mini-transformations in the course of the series, Rory is the one we really see grow up. Yeah, that’s maybe an age thing: we catch the blue-eyed babyfaced Gilmore at the tender age of 15 and watch her climb to 22, all the way to her college graduation. Rory Gilmore’s journey is well documented, and, though the upcoming Gilmore Girls: A Year In The Life shows her story is not over, it’s important to see how much she’s changed already.

Now, a lot of Rory’s growth revolves around what we’re told and what we see. That is, we’re told the so wrong Stars Hollow myth that Rory is a perfect angel, a myth that slowly gets debunked as the series progresses. However, it’s so fascinating to see Rory crumble and come back together time and time again as she discovers what she truly wants from life... beyond being the next Christiane Amanpour. Rory is not impeccable; she’s just trying to figure out who she really is. And sometimes that involves kissing the wrong kind of people. But anyway.

If you just need a refresher course on some of the episodes that showed the back-and-forth evolution of Rory Gilmore, let me outline them for you right here and now.

It's impossible to ignore the inaugural Gilmore Girls episode and how it begins to shake the rock solid relationship between the titular Gilmores. At the series open, we're introduced to very base level facts about Rory: her mom is her best friend, and she loves academics. But once Dean and his lanky locks enter the picture, Rory doesn't even care about going to Chilton and feels like Lorelai needs to just get out of her room. Our little girl is becoming a woman, as will happen when a swoony guy shows up in your life... motorcycle or not.

2. "The Lorelais' First Day At Chilton"

Tearing Rory from her Stars Hollow security blanket was no doubt going to make for a rough transition, but the introductions of Paris and, to a lesser extent, Tristan definitely lets the little brunette know she isn't in Kansas anymore. Since Rory's GPA was probably untouchable at Stars Hollow High, Paris makes for a vicious first rival. And Tristan? He uses smarminess to badger Rory in such a frustrating way. Rory is not used to this lack of love, to say the least.

Oh no, Rory gets a D on her test, confirming she's not the special scholar snowflake she thinks she is. This is naturally disturbing news, so she spends all night studying for her next test... and oversleeps... and misses it... and gets hit by a deer. Rory's stress-levels skyrocket to a point where she fully freaks out, and the reality of this private institution hits her harder than any woodland creature could. But then she gets boatloads of extra credit work to bring her grade up, so meh, I guess the "you're not a special snowflake" lesson isn't fully learned yet. Give it time.

I couldn't for sure say if this is Rory's first example of poor impulse control, but it's perhaps her first significant one. And it leaves the girl with the pristine record with a sour realization: if you skip school, hop a bus to New York, and accidentally miss your mother's graduation to see a boy who isn't your boyfriend, you probably like him. The out-of-character chain of events confirms that, huh, Rory probably won't be with her first high school boyfriend forever. Weird.

Rory's face here. Rory's face watching Jess making out with that bleach blonde hussy. Rory comes back from her D.C. internship with Paris a slightly altered girl with a low-key craving for something... someone intellectual.

Not a particularly significant episode on its own merits, just worth noting that Rory finally puts herself out there romantically. And it's an unpleasant experience at best, but it's comforting to see Rory move forward in her post-Yale life (before she takes a big step back at the end of the season).

Not to make a sweeping generalization about a social construct (or, um, I guess I'm exactly doing that), but losing your virginity changes a person. And losing your virginity to your married ex-boyfriend almost definitely changes a girl. Rory is shattered by the end of the episode by this lapse in morals, and no declarations of being "in love" can heal that hurt.

Logan's a divisive figure in the Gilmore Girls canon, no question. You can't deny, though, that he definitely pushed Rory to embrace her riskier side. And, in small doses, this was a beautiful thing for Rory to lean into adventure instead of being buried in her books, having moments of rebellion declared as so uncharacteristic. In large doses, though...

By now we've seen a pattern of "Rory realizes she's not perfect, Rory freaks out" behavior. There was going to be inevitable fall-out from Logan's dad slighting Rory's journalistic prowess. Stealing a yacht, though? Girl, you can't write this one off.

Oh, hey, the most academia-obsessed mama's girl in all of Connecticut is dropping out of Yale and severing her ties with her mother. Bold move. Bold. Move.

Tied loosely to the previous episode, "Let Me Hear Your Balalaikas Ringing Out," it's comforting to see that Rory realizes (with Jess's help) that following her grandmother's path simply isn't for her. She jumps back into her studies and career, but more importantly she runs back into Lorelai's arms. Sobbing forever.

Rory's "I can't marry you" speech to Logan is probably the closest she gets to a self-actualized young woman. She's not longer simply a book-obsessed little girl, a starry-eyed lovestruck girlfriend, or simply chasing after danger to fill a void. She realizes that there a lot of things in life that will be scary and uncomfortable, but she needs to tackle them.

Hopefully this is a version of Rory we'll see in the revival... although I'm sure there's still a lot more growing to do.