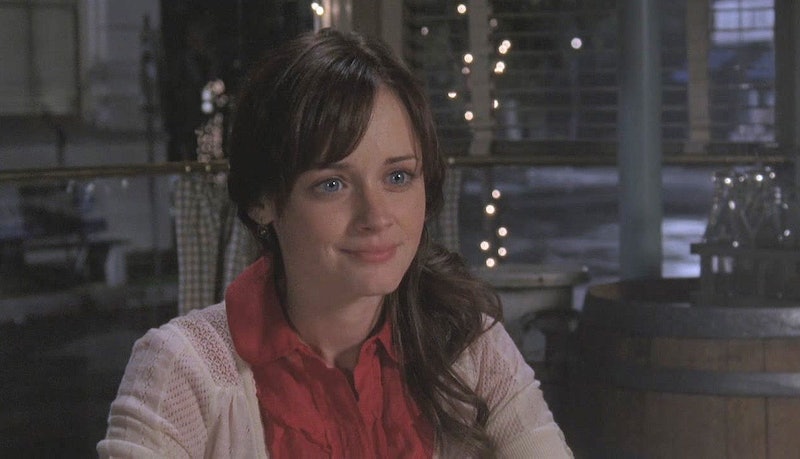 With every passing day, more and more Gilmore Girls Netflix revival news feeds into my nostalgia-loving, re-watching tendencies. In the event you may have a bad case of the blues, the cult phenomenon about mother and daughter, Lorelai and Rory Gilmore, is about to get a Netflix reboot. And, though many questions have been left unanswered about both Gilmore girls, respectively, the true heart of the series and every one's fictional BFF Rory is the most concerning. Thankfully, there have been many reveals about Rory's plot in the Gilmore Girls revival to see us through these dry times.

Through the revolving cast of vivacious characters we have seen at town meetings in Stars Hollow, Rory was the one character who I idolized the most. As a fellow journalist and educational overachiever, I always found real value in her fictional story and her dreams to become the next big impactful journalist — not to mention that her do-the-right-thing attitude made Rory one of the few television characters I saw myself in. To this day, Rory's successes, as well as her failures made her real, which is ultimately the reason why the question of who Rory will be in present day is so pressing.

Of course, as the title song says, "Where you lead, I will follow anywhere." So, there's no better way to honor my lack of patience and overwhelming love for Rory than to compile every clue we know about her in the revival.

1. Rory May Be Working At Chilton

Though nothing official has been confirmed, recently released set photos reveal Rory returning to her old stomping grounds. I mean, c'mon guys, look at the photo. She is standing in front of the class in one of her updated grown-up dresses. There is also a chance that she will be teaching with Paris, but all we really have to go off on that theory is this Instagram post actress Liza Weil posted:

2. Sadly, This Teaching Theory Could Mean Rory Is No Longer A Journalist

When the revival begins, Entertainment Weekly revealed that "Rory's one article published in The New Yorker hasn't exactly helped her journalism aspirations, and she's living a vagabond life and not seeing much of her mom." This means, though she might be working in Hartford, she definitely did not become the next Christiane Amanpour...

3. All Her Exes Are Back

One thing that has been confirmed is Dean, Jess, and Logan are returning to the Hollow. Undeniably, it has always been a struggle to decode who Rory will end up with, but hopefully it is not someone who will deter her future or her new dreams. Yet, there is always the possibility of her being back with one of her past loves.

There has also been confirmation that a “Michael Cera type” named Paul is joining the revival, and he’s “a good boyfriend.” Is he Rory's good boyfriend?

5. She Is Being A Great "Lorelai Gilmore" To One Of Her Godsons

Mitchell Gregorio, who will be playing one of Lane's sons, took to his personal Instagram page to share his love for Alexis Bledel with fans. Clearly, this could only mean Rory has become Steve and Kwan's Lorelai Gilmore and has been passing down a ton of wisdom.

6. Which, Of Course, Means Lane Will Be A Part Of Her Life Again

Lane is a definite confirmation to return to the revival. And thankfully, too, because we know that good advice and sarcasm will see Rory through better days and seasons.

7. She Still Maintains A Relationship With Her Grandmother, Sans Richard

In another recently released photo, Rory is seen with grandmother, Emily Gilmore, back at her grandparents' home in Hartford. Since the passing of Edward Herrmann, who played Rory's grandfather, it seems as though we can still hope to see the reinstatement of Friday night dinners, or just some good old Emily banter.

8. Her Dad Is Back, But The Relationship Status Is Unknown

Rory's dad, Christopher Hayden, has been confirmed to be back in the revival series, but there is no telling what level of good to tumultuous their relationship could be at. As memory serves, Rory is used to cutting her dad slack or cutting him completely out. Here's hoping father and daughter are stronger than ever.

9. She May Have To Face Mitchum Huntzberger Again

Weirdly, sadly, and awkwardly, Mitchum Huntzberger, Logan's dad, is coming back. No one wants what I call the "dark years" to return (my definition of dark years: When Rory dropped out of Yale, shacked up with her grandparents, joined the DAR, stopped talking to her mother, and derail her life all because of Mitchum.) Doesn't his name just send chills down your spine?

10. But She Will Get The Final Say

Rory and her mother are confirmed to have the final four words of the series after the fourth episode is aired. And every one just wants to know... what will they be?

11. And Her Relationship With Her Mother Still Seems Perfect

In one last revival photo that was released, it seems like things are picking up right where they left off for Rory and Lorelai: in their Stars Hollow home and in the kitchen. What could be better than that?

No matter where Rory ends up in the revival series, it warms my heart to see that our journey with her did not end nine years ago. In fact, it is just beginning again.