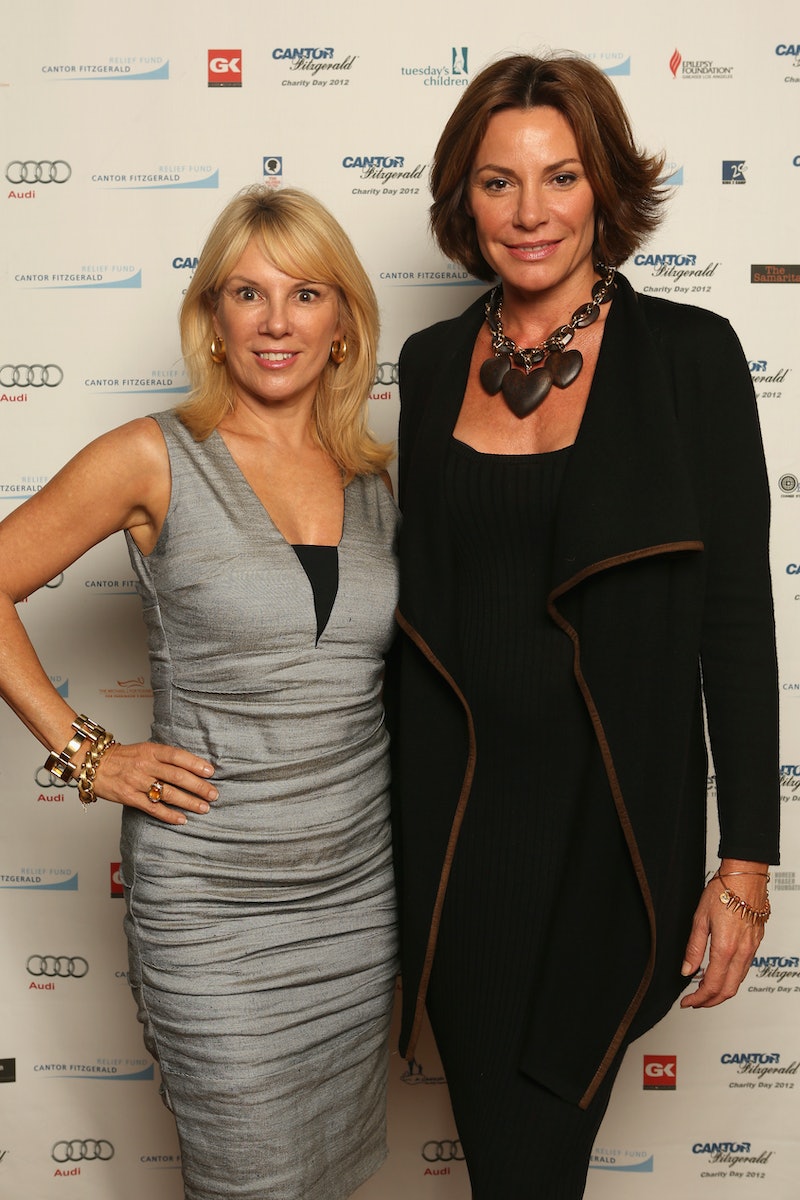 Even when they're not filming, the Real Housewives of New York City stars can't help but surround themselves in drama. During a panel for Mohegan Sun's 20th Anniversary Celebration on Sunday, Ramona Singer said Luann de Lesseps will go through with marrying Tom D'Agostino Jr. As much as The Countess said she forgave her fiancé after Bethenny Frankel showed her that photo of D'Agostino kissing another woman, I'm sure many fans were still wondering if she would actually go through with the wedding. Well, Singer is convinced she will, and the reason why she thinks de Lesseps will still marry D'Agostino is something fans will want to hear.

After being asked if she thinks the wedding will happen, the Bravolebrity said:

"I do think it will happen because after, you know, it's one thing to find out a man has been not faithful to you if you've been married for 20 years, you have children, [and] you try to make things work. If you're engaged after three weeks and he's already cheating on you, I mean, you've gotta think twice. I mean, she has money, she has the children, she's attractive, and she caught him again doing something and she's still with him, so I think she's getting married."

That's right, the 59-year-old reality star claimed de Lesseps caught D'Agostino being unfaithful again. However, de Lesseps is denying it. "The Ramona coaster is out of control," her rep told Bustle in a statement. "Her claims are completely false. We hope Ramona can start to focus on her own life and happiness. Tom and I are happily planning our wedding and our future together."

As for Singer, Bustle spoke with her Monday and she clarified her Mohegan Sun comments. "So, basically what I was speaking about is already on public record. The girl he was with at [The Regency] ... Tom, again, was with [the woman] in California," Singer claims. "He was spotted kissing her again in L.A. and it was written in the press, so that's what I was referring to. He did it twice with the same girl. It was like two months later [after The Regency]. ... She said she never stopped being in contact with him. That's what I was speaking from. It's not anything I saw or witnessed, it's what I read."

The article Singer is referring to appears to be one published by OK! magazine in September (via All About the Tea), where Deborah Driggs (the alleged woman at The Regency with D'Agostino) claimed she and D'Agostino are "still very close friends" and they are "definitely in contact." She also claimed they met up at L.A.'s Montage Hotel three months after their kiss at The Regency. "[Tom and Luann] must have gotten into a fight that night, because Tom said he was 'done.' We talked for a long time, but nothing sexual happened," she claimed.

As for de Lesseps' statement denying her claims, Singer says,

"There is no response. There's an article, if you read it, this woman spoke saying that she and Tom are still in communication and she was kissing him and it was all over the news. My response is I was quoting what was reported in the press ... Luann read it and maybe Tom denied it, I don't know what Tom said, how do I know? This girl who goes to press, I don't think a girl would go to the press unless it's true, right? What advantage is it for her? What advantage is it for Sonja [Morgan] to say she slept with Tom four times? What advantage is it for me to say I went out with him six times? Why would I make up stuff? No one makes up this kind of stuff. Basically, I was referring to an article that was published."

If you think Singer received an invite to the wedding, she did not. "I actually get along with everyone, though I don't know why Luann didn't invite me to her bridal shower. Nor did I get an invitation to her wedding." Singer added at the Mohegan Sun celebration panel, "All my friends are going, she invited all my friends." I guess she is going to miss out on one of the most talked about Real Housewives weddings ever.