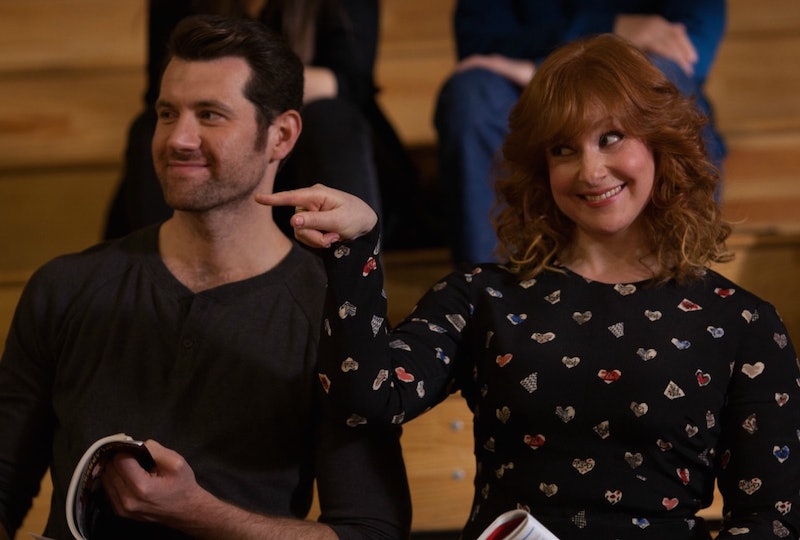 There's a lot to like about the show Difficult People, but, as a writer in New York City who doesn't necessarily have the most traditional voice, I have to say it's incredibly inspiring to see that Difficult People was just renewed for a third season. It will be 10 episodes long and stream on Hulu, just like Seasons 1 and 2, beginning sometime in 2017. Frankly, I'd be psyched for creator and star Julie Klausner and her costar Billy Eichner regardless, because it's huge to get three seasons of a show as unique and specific as Difficult People. In this case, I'm also particularly inspired by Klausner and Eichner, because they've forged their own path and found success with a show that so stubbornly refuses to dial down the snarkiness.

Sometimes, in the comedy world and in the writing world both, it can be tempting to try to change your comedic voice to make it more marketable, to blend in a little more with the average person. But Klausner and Eichner have avoided that pitfall, remaining so true to themselves that they've even given their characters their same real-life names, Julie and Billy. Their last names are different, which makes sense, because these characters are of course heightened. As Eichner shared after Season 1, explaining his and Klausner's roles, "We’re very blunt, we’re very brutally honest, we’re very confrontational. And we both get to say things to people that annoy us that we wouldn’t say in real life."

So, instead of dulling down their real selves, they actually get to heighten them, creating characters who have been described with adjectives like "miserable," "cranky," "struggling," and "jaded." We shouldn't like Billy and Julie, but, because Eichner and Klausner have been able to hew so closely to their own experiences, we do. And, because many of us can be labeled with those exact same descriptors that I just dropped, Julie and Billy end up feeling like fully-fleshed out, delightfully — albeit frustratingly — complicated, funny, vulnerable human beings that anyone can relate to.

And I love the fact that we live in a world where there's a market for a show like Difficult People and that the show's creator, writer, and producer Klausner was patient enough to wait for that audience instead of trying to mold herself into someone just like everybody else. There wasn't anything on TV that was "for her," so she went out and wrote it herself, and I love that. That's the way you've got to do it, instead of waiting around for someone to get you.

She and Eichner are both 38, and just now getting the kind of attention and accolades that I think they've deserved from the beginning of their careers. Even though I have a lot more work to do, it makes me feel a lot better about doggedly plugging away at 29, trying to figure out what I want to do and how to stand out.

Just watching the show, I never would have expected to start thinking of these people as role models, and Julie and Billy certainly are not. But Klausner and Eichner absolutely are, and I'm so excited that they're getting another chance to showcase their unique brand of humor, intelligence, and brutal honesty with Difficult People Season 3.