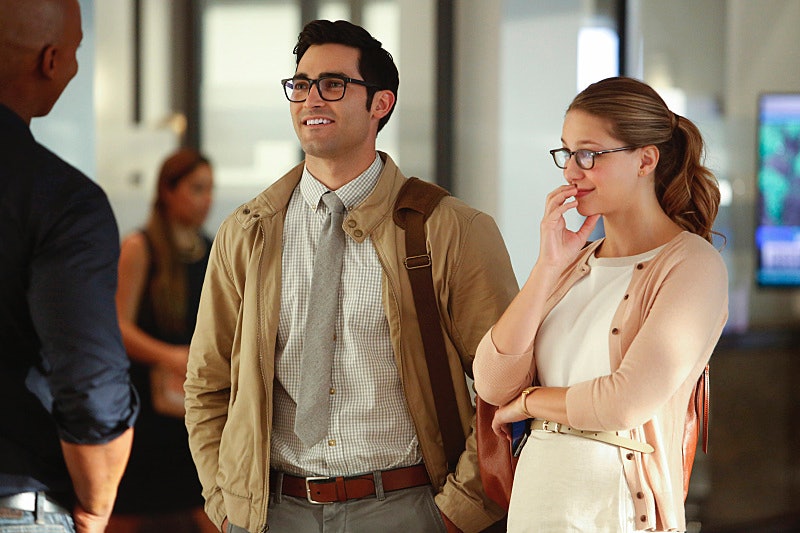 In Season 2 of the CW's latest DC Comics-inspired series, Supergirl, Kara Danvers' famous cousin, Superman, has finally flown onto the scene. However, Kara's individual story has room for even more additions. According to a recent Collider interview with Supergirl's Executive Producer, Andrew Kreisberg, and Superman himself, Tyler Hoechlin, the famous cousins won't be attached at the hip permanently. In fact, their separation could make room for Lois Lane to join Supergirl in upcoming seasons perhaps.

"The show is called Supergirl, and it was always designed to be about somebody who had to deal with a very famous relative whose shadow was very difficult to step out of. In some ways, you didn’t need to see him to make that work," Kreisberg said. "Now that Tyler has inhabited the part, whenever there’s discussion about Superman in subsequent episodes, or the thought of them talking to each other, or somebody says, 'I’ll check in with Superman,' now you can imagine Tyler. It makes all of those mentions, and then the idea of him being out there, that much more powerful because you can imagine it and you know that he’s out there and he’s ready to help."

While, right now, Clark's role in Kara's life has been established, and working in the same industry and becoming better connected to Clark does leave the door open between Kara and Lois. Let your mind run wild with this one when it comes to picturing just who Lois might be.

Hoechlin said, "I think there’s plenty of talented actresses out there who could do it justice, but no dream casting. Hopefully, it would just be a dream person to work with, and somebody who’s a very supportive actress and very present in there, and who was always great and nice to the crew. That’s always a nice bonus. Any of those requirements would be great. But, I think it could be fun."

I'm already picturing Kara and Lois as the best of friends — even and especially when Clark isn't around. After all, Supergirl already introduced Lois' younger sister, Lucy Lane (played by Jenna Dewan Tatum), who eventually became one of Kara's closest allies. It only makes sense that her older sister comes into the picture as well on a show as woman-positive as Supergirl.

But, then again, it will probably be a long time before the show introduces another classic character into the mix. "There’s no real plans right now," reinstated Kreisberg. "We’re happy we have Superman." Listen, Superman is great and all, but we all know that he wouldn't be nearly as effective a hero without Lois Lane in his corner. I'll just be here counting down the minutes until we finally hear about her being cast.