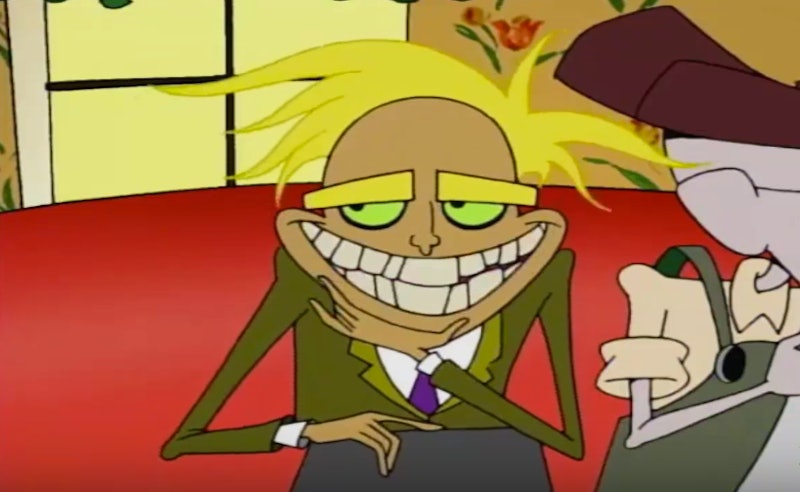 There's something about being scared as a kid that's kind of entrancing. Courage the Cowardly Dog was always a show that gave me nightmares, but it also captivated my young mind in a way I couldn't describe. It was the definition of finding something so strange you just want to look away from it, but you can't. Despite being a children's show, there were definitely some creepy Courage the Cowardly Dog episodes that our parents should not have let us watch at such a young age.

I was a huge scaredy cat as a kid and had no tolerance for anything even remotely spooky, so I'm not really sure how I managed to watch every episode of this as a kid. Still, it continues to be one of my favorite cartoons. If it wasn't the twisted storyline about a dog forced to protect his beloved owner and her cranky husband from the paranormal beings that surround them, it was the varied animation styles, creepy music, and surreal in-depth characters that haunted me in a way my six-year-old brain could barely grasp.

While every episode of this show was essentially the perfect formula for a nightmare, there were a few that stood out among the rest (and may or may not continue to haunt me to this day). These are some of the creepiest Courage the Cowardly Dog episodes, so go ahead and remind yourself of all the terrifying "things he did for love."

Eustace Bagge was one of the crabbiest and most problematic characters on this whole show (and that's saying something). It's Eustace's greed and desire to keep a stolen slab worth one million dollars that forces the entire family to be haunted by the ghost of King Ramses, who refuses to leave until the slab is returned to his tomb. The real spooky part is the visual itself; what the heck is with that animation style? I'm not saying it isn't good. I just think it's a little terrifying when it's paired with a monotone voice repeatedly demanding that you "return the slab." This one definitely made me shiver as a kid.

Freaky Fred, or Muriel's nephew, is one of the most memorable and weirdest characters to ever appear on Courage. With an unhealthy affinity for cutting hair (a la Sweeney Todd), Fred becomes fixated on Courage and snips off all of his hair, except for the hair on his tail (because that would be weird). Polite and friendly in all other respects, Fred terrifies Courage and the audience as we wait to see what he'll do next. Whether you love or fear Fred, he definitely shouldn't be your first choice if you're looking for a haircut.

A demonic mattress monster possesses the typically sweet Muriel in this episode, forcing her to behave like Regan in The Exorcist. Needless to say, it was the fiery red hair, hissing tongue, and bouts of tantrums while levitating five feet in the air that haunted my nightmares and left me wondering about Courage's fate at the end of the episode. Luckily, everything turned out OK, but a demonic old woman swallowing people whole isn't really what I expected to be my source of entertainment as a kid.

4. "The House of Discontent"

I like to call this the Harvest Moon episode because it's not really the plot that makes this episode so creepy as much as the perpetually haunting image of a black and white disembodied head floating in my basement while threatening to kick me out of my home (and I didn't even have a basement). Even though I knew it was just a TV show, the floating head (ghost?) was something I hoped would never appear in my room in the middle of the night or catch me in a pitch-black hallway.

This one was a sweet episode compared to the others on this list. "The Mask" was really just about a cat looking to help a bunny escape the clutches of her overprotective, biker boyfriend. But, the fact that Kitty wore a haunting, porcelain mask during the majority of the episode, never spoke and physically attacked Courage several times wasn't reassuring before we knew about her mission.

First of all, how was I expected to know what a weevil was as a kid (I'm still not sure I know)? Whatever it is, it's definitely not supposed to be the size of a human. But, Eustace (ugh) had to go and hit the only person-sized weevil in existence with his truck, causing Muriel to invite him into their home as he recovered. Generally helpful and polite, the weevil has a horrible secret: He sucks the energy from humans using his creepy fly-like tongue to satisfy his hunger. This definitely encouraged me not to talk to strangers when I was younger.

Slightly less outwardly creepy as some of the other Courage episodes, this one may have forced you to pay attention as a kid to get what it was really supposed to be about. A (seemingly) friendly pig who runs a restaurant raises Courage's suspicions when customers keep disappearing into the back room of the establishment. Courage deduces that the pig is killing the humans and using their flesh as meat in his hamburgers. That's totally a kid-friendly TV show plot, right?

In this episode, the Boggart-like presence of a bitter scientist's ghostly shadow haunts the farmhouse. Transforming into an octopus, a snake, and even Courage himself, the shadow plagues the family, refusing to leave until Courage has a talk with him about hopes and dreams, helping him find his path in life — the path of showbiz. That wasn't where I was expecting this episode to go at first, especially with all the lightning and thunder. I guess Courage taught us not all monsters are as bad as they seem, though.

When a film director who looks very much like a zombie encounters Eustace being mean and abusive towards Courage, he decides it'll be the perfect plot for a reality TV show about the Bagge family. The show becomes super popular in Nowhere, but ultimately ends when Courage drowns the producer in a pit of quicksand out of fear for his life at the rate the show was escalating. It's just some light-hearted, after-school TV.

This episode was almost too real for me to even understand at such a young age. Overwhelmed by his insecurities (no thanks to Eustace), Courage's worries about himself cause a phantom-like, elderly school marm named The Perfectionist to arrive at the farmhouse. Apart from being generally spooky, The Perfectionist screams at Courage, slapping down her yardstick as she gives him lessons in perfection. She judges him on everything he does and threatens to label him as permanently imperfect if he does not pass her perfection tests. But, thanks to a mysterious bathtub eel, Courage realizes he's perfect the way he is. I just wish we could have learned all of that without being haunted/threatened by a creepy old woman constantly judging our beloved, childhood friend.

Even the title of this episode is a little strange. An alien creature comes into the farmhouse by claiming, "Car broke, phone yes?" Once he's inside, Courage sees that the man in the trenchcoat is really an alien seeking to take away DNA and characteristics of the Bagge family to use in experiments. Filled with UFOs, test tubes, and way too many images of brains with tentacles, this episode made sure I would never answer the door for anyone when my parents weren't home.

I definitely shouldn't have been watching this stuff as a kid. So thanks for the nightmares, parentals.

More like this
26 Ghost Story Podcasts To Get You Ready For Halloween
By Jessica Booth, Mia Mercado, JR Thorpe and Emma Carey
15 Easy Pranks To Play This Halloween
By Emily Kelley and Lauren Grant
10 Stranger Things-Inspired Halloween Costumes For True Fans
By Emma Carey
'The Ex-Wife’s First Look Pics Are Giving 'Gone Girl' Vibes
By Bustle UK
Get Even More From Bustle — Sign Up For The Newsletter