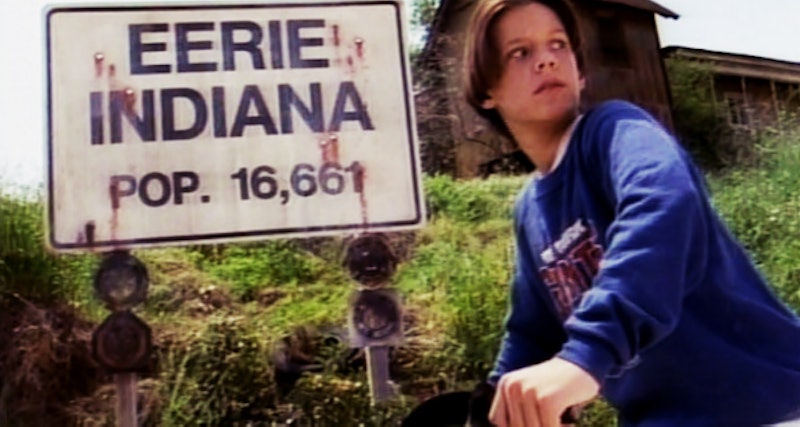 If you were a young horror fan growing up in the '90s, TV was a smorgasbord of scares just waiting to be discovered. From the scary tales the Midnight Society dished out every week to the unexpected horrors Stu Pickles cooked up in his toy shop, there was no shortage of spooky TV shows in the '90s. Who knows what it was about the era that inspired so many unnerving TV shows, but kids everywhere basked in the fear factor of tuning into shows that were in some cases downright forbidden.

Your parents were less than thrilled with all of these horror treats because more often than not they gave even the most scare resistant kids nightmares. Come on, you know Slappy the ventriloquist dummy invaded your dreams on more than one occasion — he definitely made his share of cameos in my nightmares. As much as I enjoyed watching shows that would give me goosebumps, I was a chicken at heart.

No matter where you fall on the bravado scale, the 13 shows on this list scared you when you were a kid. Even the bravest child could not deal with the Unsolved Mysteries theme tune — that's just a fact. Head down the darker path of your childhood memory lane to rediscover all the shows that kept you from turning the lights off when you were a kid.

From the moment the opening credits started, the shivers began. Mulder and Scully's investigations into unnerving monsters like Tooms, the Peacock family, and Flukeman were gruesome detours you were so not ready to see when you were little.

Whoever composed the theme music for this show was an evil genius.

3. Are You Afraid Of The Dark?

If you know who Zeebo the Clown is, then you know just how unnerving the Midnight Society's stories could get. Are You Afraid of the Dark? was aimed at kids, but it had no issue with filling their heads with nightmare fuel.

The Tupperware episode was my personal kryptonite, but everything about this '90s cult classic was designed to make kids suspicious of the mundane.

5. Tales From The Crypt

I honestly have no idea how scary the actual show was because I, like pretty much every other kid in the '90s, could not make it past the Crypt Keeper to find out.

Not watching Goosebumps was simply not an option, no matter how many times Slappy reappeared to reawaken all your doll fears all over again.

The scariest part of this show was how no one ever believed Courage. This poor, little dog faced off against aliens, talking tree monsters, and all manner of things that went bump in the night in an attempt to keep his owners safe, but they never seemed to understand the danger they were in. This cartoon was scary because it left you feeling as helpless as Courage.

A bunch of kids make friends with a literacy-obsessed ghost — that's totally normal, right? Creepy premise aside, I will never forgive this show for inflicting the Slime Monster on my innocent young mind. Never.

Hey, remember the episode where Ren plotted Stimpy's murder? How about the one with the toothache? Intentional or not, Ren & Stimpy's psychological horror cost kids a whole lot of sleep.

So Weird was like a junior X-Files, but the show's youthful target audience did not prevent it from offering genuine scares. Death, paranoia, and monsters invading your dreams were just a few of the themes the show dished out for its eager, terrified young audience.

11. Fact Or Fiction: Beyond Belief

When you were a kid, it didn't matter if a story was fiction, once you watched the reenactment, it was going to be fact as far as your brain was concerned.

I know, shows don't come more innocent than the Rugrats, right? Wrong, so very wrong. Between Tommy's fever dreams, Chuckie's fear the potty was going to swallow him, the episode where Angelica convinced the babies the world was ending, and all the horrors Stu cooked up in his little shop of toy terrors, the Rugrats scared you silly as a child — you just tried to block the more alarming stories out.

Whether you love them dearly to this day or avoid them at all costs, these shows all scared you when you were a child.

More like this
The 'Hocus Pocus' Sequel Finally Has A Release Date & It Makes Total Sense
By Shannon Barbour and Radhika Menon
Alicia Silverstone Has Recreated An Iconic 'Clueless' Scene
By Frances Stewart
Kimberly J. Brown & Daniel Kountz Looked Back On Their ‘Halloweentown’ Romance
By Stephanie Topacio Long
You’ve Been Singing “Teenage Dirtbag” Wrong This Whole Time
By Bustle UK
Get Even More From Bustle — Sign Up For The Newsletter