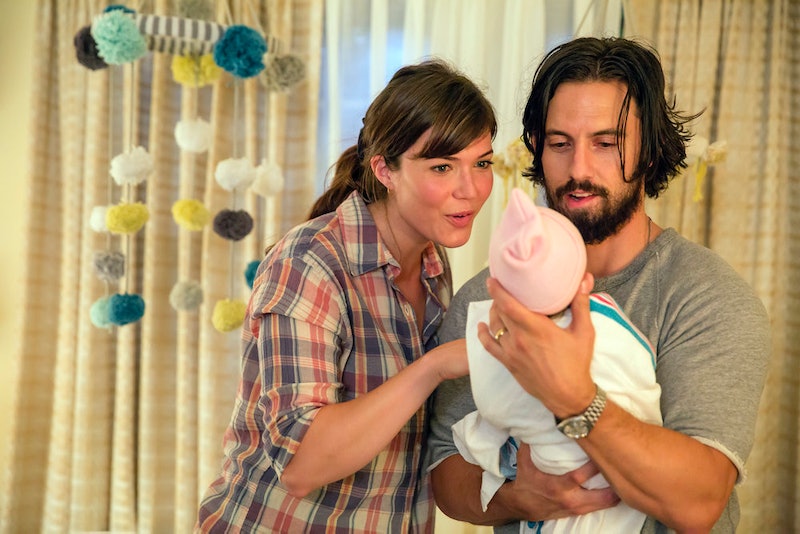 For most people, the biggest questions so far on This Is Us isn’t “How can I get Chrissy Metz, who plays Kate, to be my best friend?” (that’s just me), but rather, “Is Jack dead?” Milo Ventimiglia’s father figure is one of the core characters of the show, but viewers have only seem him as a handsome dad in the '80s — never as a grandfather in the present. Now, I’m not complaining about the handsome part, but I want to know where Jack is in the present day and why he hasn't stopped by to visit his now grown children. Unfortunately, I think he’s no longer with us, and interviews with the cast have provided many clues that Jack is dead on This Is Us.

In the present, Jack is described as a devoted father who was always ready with an encouraging word or life lesson for his kids. In the past, Jack had his moments. He vented to his best friend, Miguel, about “not knowing” his wife Rebecca anymore, and he drinks a lot, so much that Rebecca gives him an ultimatum — shape up or ship out. We’ve seen Rebecca in the present day, but she only showed up with — guess who — Miguel, who seems to be her new husband. Say what? Now, Rebecca’s being with Miguel instead of Jack doesn’t necessarily mean that Jack is dead, but it doesn’t help, especially because she was still wearing the necklace Jack gave her, which would be odd if they were divorced.

Cast members of most shows are very tight-lipped about upcoming plot points, and that's true of the This Is Us cast as well, but if you read between the lines, you may able to find some clues about Jack's fate.

In an interview with Entertainment Weekly, Brown said that people contacted him after the big Miguel reveal — they were not happy that Jack had seemingly been replaced. Brown’s response? “I was like, ‘Hey, man. We don’t know the whole backstory. Let’s give Miguel a chance, please. Please, give Miguel a chance — he deserves it." Why does Miguel deserve it? My guess is that Miguel was there for Rebecca during the difficult time following Jack's death and that finding solace in each other eventually lead to romance.

In the same interview, Metz told Entertainment Weekly, “I’m so attached to Milo, and I really believe him to be like a father figure to me — even in real life — so that as Kate I’m like, ‘No, no, no, no, this is my dad! Nobody’s going to replace my dad!’” Well, fictional Kate, why would your dad need replacing unless he was no longer around? If Rebecca and Jack were just divorced, Jack would still be around and wouldn’t need a stand-in, right?

In another interview with Entertainment Weekly, when pressed about Jack and Rebecca, Fogelman said, “At the end of whatever their journey is — and we haven’t even gotten there yet — I like to think that great love still exists at the end of it, wherever it ended.” Well, sure, we haven’t gotten here yet, but if they were divorced, would that love still be there? When someone dies, love doesn’t, and that’s why I think that Jack passes away and Rebecca remarries. She still loves Jack, but he’s no longer alive. There’s your great love, everlasting.

Hartley may have given the biggest spoiler of them all — in a Facebook Live chat with Entertainment Tonight he said, “As to when he dies is up for grabs as far as the audience is concerned.” Oh, boy — pretty sure that was a spoiler. It all starts around the 3:00 mark of the video.

I’m pretty convinced that Jack is dead in the present and This Is Us is just waiting to deliver that heartbreaking reveal. Then again, there have been so many twists already, this could all be a way to distract us from what's coming.