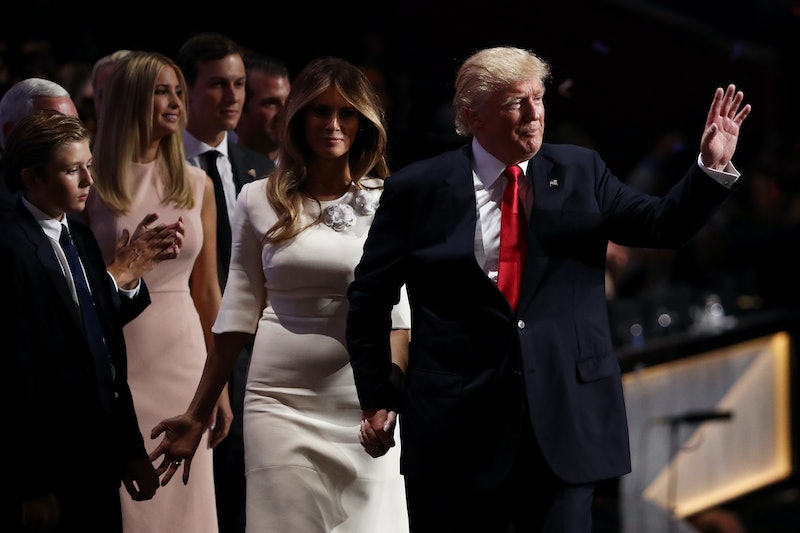 In an interview set to air Monday night, Melania Trump sat down with CNN's Anderson Cooper to give her first on-camera response to the 2005 audio recording in which her husband claimed that he can do whatever he wants to women, including "grab them by the pussy," due to his fame. Melania referred to the language as "boy talks," echoing Donald's description of it as "locker room talk" at the second presidential debate. Her phrase contributes to the campaign's effort to take the edge off her husband's speech by normalizing its content. While this kind of language might be common (and many have cast doubt on how common it is among decent men), that doesn't make it innocent.

Melania was clear in the interview that she does not condone the language her husband used in the recording. "I said to my husband that, you know, the language was inappropriate. It's not acceptable," she told Cooper. "And I was surprised, because that is not the man that I know."

There, Melania separated Donald's language from the person he truly is. The defense is that it's "just talk," completely divorced from a person's actual behavior or beliefs about behavior toward women. And maybe that's the case for some people. But the divisions between talk and belief, between talk and action, are not so clear-cut, according to research — particularly when it comes to sexist humor and men's acceptance of sexist behavior, including sexual assault (i.e. grabbing a woman "by the pussy").

In 2007, a group of researchers (G. Tendayi Viki et al) published a study in which they sought to examine whether there is a correlation between exposure to sexist jokes and accepting attitudes toward rape. They were operating on the "prejudiced norm theory," which, in social psychology, posits that individuals who adopt a non-serious, non-critical mindset when exposed to prejudiced humor are more likely to adopt such a mindset when confronted with prejudiced behavior, making them more likely to either accept such behavior from others or possibly perform it themselves.

They recruited 120 men (mostly under the age of 26) and assigned them to one of four groups, each of which read a series of jokes, followed by a scenario in which a woman is raped. Two groups read sexist jokes followed by either an acquaintance rape or stranger rape scenario; the other two read either of those scenarios after reading non-sexist jokes. The participants then answered a series of questions to give researchers an idea of their levels of victim-blaming, the seriousness they attached to rape, their self-reported willingness to behave as the man did in the rape scenario, and the sentence length they'd recommend for the rapist.

The least-sexist attitudes reported in the experiment (the least amounts of victim-blaming, the greatest seriousness attached to rape, etc.) came from both joke groups who had read the stranger rape scenario. The real difference was between the two groups that read about acquaintance rape. Men who read sexist jokes prior to reading that story took the incident significantly less seriously, blamed the victim significantly more, reported significantly higher likelihood of behaving as the man did themselves, and significantly shorter sentence length recommendations.

By no means does the research prove that men who say or hear sexist jokes would actually commit sexual violence. And it doesn't prove that men would be more accepting of it when exposed to sexist humor, either. But it suggests that there may be a correlation, and that's one reason "boy talk" is anything but benign.

The problem with Melania's attempt to normalize her husband's language is not that she's incorrect. As linguist Amanda Montell explained, objectifying talk about women is a common device men use to bond. But Melania, and others describing Donald's speech in such innocuous terms, miss the possible connections between the norm as that which typically occurs and a norm — that is, what is perceived to be good or acceptable. Casual sexist talk can lead to casual attitudes toward sexist action. I believe it's long been time for boys to talk differently.