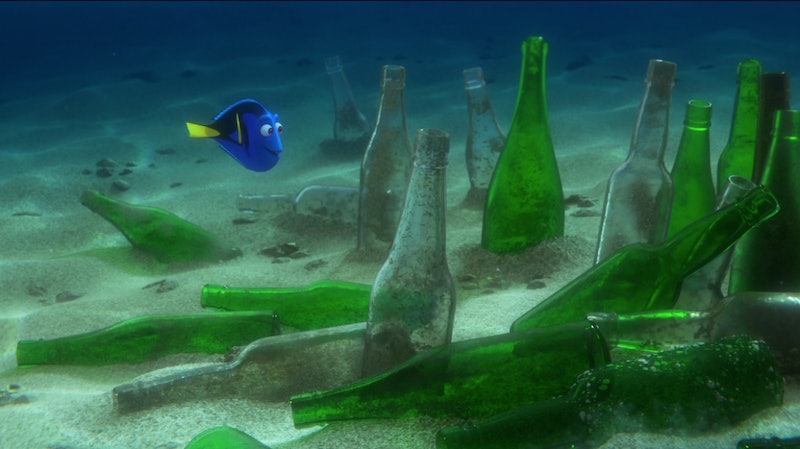 In Disney's new behind-the-scenes look at Finding Nemo and it's sequel, Finding Dory , director Andrew Stanton gives a little background into the origin of the world's favorite short attention spanned Pacific blue tang, Dory. In a short informational video, Stanton describes the functional reason for Dory's quirks, many of which can be witnessed IRL when the movie becomes available for Digital HD October 25 and Blu-ray November 15. Dory, voiced by Ellen DeGeneres, quickly became a favorite character in Finding Nemo when the film was released in 2003. She was so beloved, the happy-go-lucky fish snared herself a lead role in Finding Nemo's sequel.

But according to Stanton, before Dory was a well-known character, her primary function was that of a plot device. Dory's original use in the script was to serve as a deep ocean guide for Marlin in his hunt for Nemo. The determined yet cautious clownfish needed a more carefree character to keep him going. Meanwhile, her most iconic characteristic, her short-term memory came from something Stanton heard about fish only having 5-second memory spans and he "thought that was hilarious." But the trait wasn't just a joke, Stanton explained that the characteristic always "helped" the story. Through Dory's forgetful antics and occasional last minute remembering, she and her partner-in-crime, Marin get into the zaniest of hijinks.

The co-director of Finding Dory, Angus MacLane, goes on to describe how it then proved to be a bit of a challenge to take a character whose primary role was to assist another character in one film and then make her the main focus in another. He claims, "we had to rediscover who Dory was as a character." He points out that Dory's naivete is more than a symptom of her short term memory — she is also a light-hearted, easy going character — and naivete, short term memory, and being easy going all go hand in hand for Dory. In Finding Dory, the fish's disability specifically issues with short term memory, is used less for comedic relief and more about her struggle to accept and deal with herself. In an interview with Slashfilm , Maclane talked a little bit about Dory's change of pace.

"I feel like most people have something about themselves that they see as a big flaw and that they’ve never been able to change about themselves. And I think the key is not often that you can conquer it, that you can get rid of it, but it was more as a how do you conquer it? How do you own it? How do you turn that into an asset? And I think that’s a very universal thing. And it works for disabilities. It works for handicaps, but it also works for just how you see yourself as imperfect."

After knowing a little more about Dory's origin as a character, as well as the development the character has undergone to be a lead, I feel myself craving a Finding Nemo and Finding Dory double feature. Both Nemo and Dory overcome their disabilities in beautiful ways in their respective movies, and that is a happy story anyone can get behind watching.