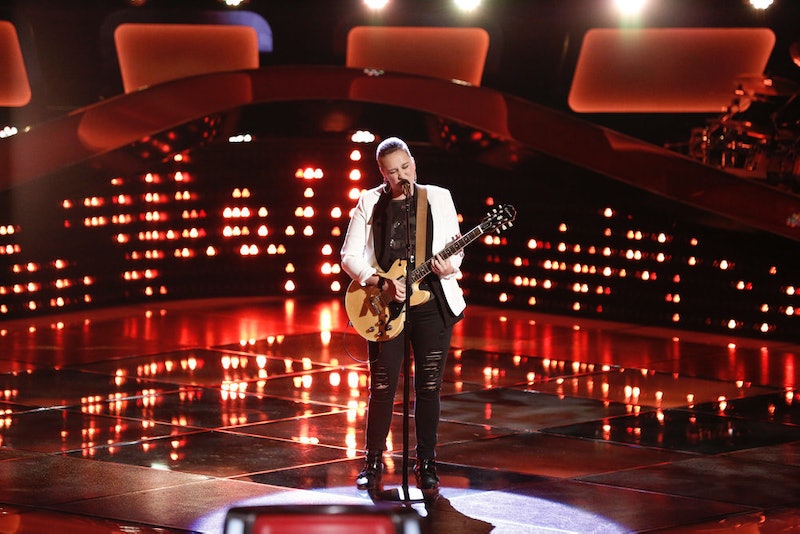 Girl power at it's finest. Kylie Rothfield dominated her The Voice Battle Round against fellow Team Alicia member Josh Halverson. The two were paired together to perform "House of the Rising Sun" in what ended up being one of the most exciting Battle Rounds of this season of The Voice. Because the song was so perfect for both of the artists, they were really able to push themselves to limit and show off their best vocals. While Halverson did a great job, Rothfield did better. By showing off her expert guitar skills and raspy vocals, she sang her way into the Knockout Rounds and into America's hearts.

Rothfield is truly an incredible artist, but it's not just her vocals that are impressive. The Berklee alum is extra special because she has overcome injury to get to where she is today. Much like a football player can injured to the point where he can no longer play, Rothfield's voice was injured to the point where it hurt to sing. She experienced a vocal hemorrhage, which is exactly the injury that forced Adele to cancel her tour dates and undergo surgery a few years ago. It was an injury that made Rothfield believe she wouldn't sing again, but thankfully that didn't happen. Rothfield eventually got her muscle back to where it was and was able to continue singing. Today, you would never know that there was a time when she couldn't sing. Rothfield possesses both the talent and performance skills of a professional. She deserves to be in the music industry, which is why it is so important that she won her Battle Round.

Though Rothfield is an incredible artist on her own, she's been given the opportunity to become even better with coach Alicia Keys on her side. Alicia will be able to push Rothfield to her full potential. Now that Rothfield's voice is back, Alicia's going to help it become even better. The two will work together to take Rothfield's talent to the next level. If her performance tonight is any indication, Rothfield is bound to be a force in this competition. Get used to seeing her around, because she's not going anywhere for a while.