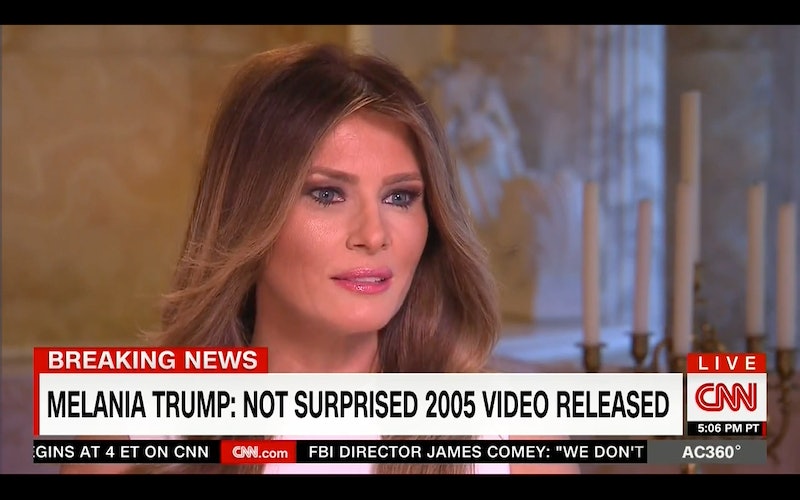 On Monday afternoon, CNN's Anderson Cooper interviewed Melania Trump and you might have to rewatch it if you couldn't believe your ears the first time. There was no single highlight from the landmark interview. Instead, there was a handful of key moments, ranging from Melania discussing negativity on social media, to her excusing her husband's "raw" rhetoric following the numerous sexual assault allegations that have emerged. He has denied each allegation. In fact, the media appearance marked her first interview since The Washington Post published the 2005 Access Hollywood hot mic tape recordings of her husband.

During the first half of the interview, Cooper cut straight to the chase and asked Melania what she thought about that tape. She responded by defending her husband, suggesting that Access Hollywood host Billy Bush "egged" him on. She went on to equate her husband's words with "boy talk"; in the recording, Donald Trump bragged that he could "grab them by the pussy" without consent because he's a "star."

I said to my husband that the language is inappropriate, it's not acceptable, and I was surprised because that is not the man that I know. And as you can see from the tape, the cameras were not on. It was only a mic, and I wonder if they even knew that the mic was on, because they were kind of a boy talk, and he was led on, like egged on, from the host to say dirty and bad stuff.

When Cooper asked Melania about Trump's response to the sexual assault allegations that surfaced after the recording was released, she defended him yet again. In an effort to convince Americans to think nothing of the allegations, all of which Trump has denied, he criticized the accusers' looks, implying he wouldn't be interested in them anyway. Melania insisted that Trump, nevertheless, respects women:

He's raw. He will say it as he feels it. So you know, I know he respects women. But he's defending himself because they're lies.

You can rewatch the interview in full here:

Though it's unlikely Melania will have much luck convincing women otherwise, her message about social media is one that Trump himself would be wise to heed. Explaining how she wants to focus on children if her husband is elected president, she told Cooper, "We need to guide them and teach them about social media because I see a lot of negativity on it."

According to The New York Times' tally, Trump has insulted over 270 people, places, or things over Twitter, contributing a large chunk of negativity to the social media mix. Maybe he took Melania's comment to heart, but I'm not betting on it.