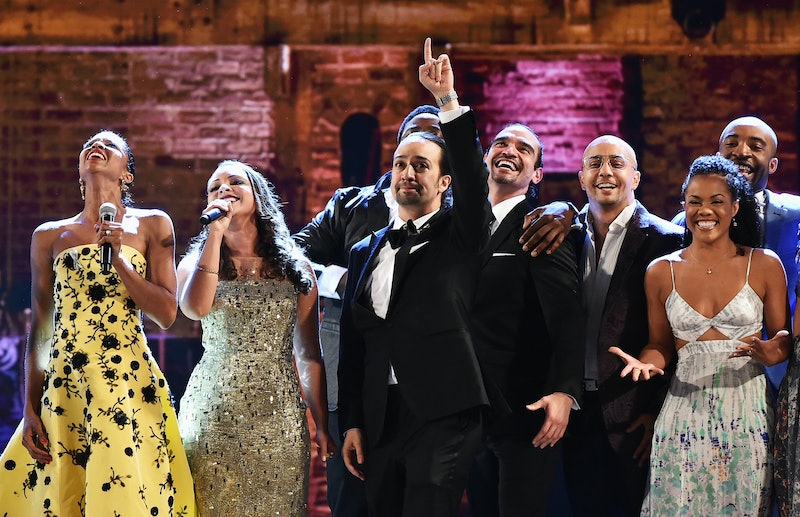 "Stronger Together," a Broadway fundraiser for Hillary Clinton's campaign, took place in New York City on Monday evening. And everyone knows the star-studded event wouldn't have ever been complete unless Hamilton's Renée Elise Goldsberry and Lin-Manuel Miranda rapped about Clinton in true Broadway fashion. The pair performed a rewrite of the hit Broadway musical's "The World Was Wide Enough" and if you loved the original version, you'll like this one even more. If you have your doubts, just wait until you hear Miranda rap "Tim Kaine in the membrane."

The event, hosted by Billy Crystal, featured over a dozen performances and more than 10 monologues and speeches from big names such as Lena Dunham, Angela Bassett, Helen Mirren, Julia Roberts, Sarah Paulson, and even Chelsea Clinton. Some other musical performances included songs from productions such as Into the Woods and Annie, among many others. The event aired at 8:30 p.m. ET and was available via livestream from a number of different outlets, including Clinton's own YouTube page, and several social media platforms. This isn't the first time many of these performers, including Miranda, have taken the stage to show support for the nation's Democratic presidential candidate, but it was arguably the most star-studded campaign fundraising events yet.

Miranda and Goldsberry begin by outlining the ten things "you need to do" to presumably elect Clinton to office in November. After showing your support for Clinton and trying to convince people in "red" states to do the same, the pair suggests that voters who are "with her" "watch Hillary examine the terrain, watch her campaign with the man Tim Kaine." Next comes, arguably, the best line:

As Miranda and Goldsberry continue to list off the necessary steps, they mention in unison, "Experience is not a liability." The line is most likely directed towards those who believe Clinton's career as a Washington politician is a detriment to her trustworthiness. Obviously, these Broadway stars think otherwise. Lastly, before ending their rap, the singers leave viewers with one important takeaway:

"I have only one overwhelming feeling," Miranda sings. "Anybody here want to shatter a glass ceiling?" both he and Goldsberry exuberantly ask the crowd.

Whether or not you're a fan of the 2016 Democratic nominee, Clinton did, in fact, make U.S. history when she became the first woman to accept a major party's presidential nomination. If her support system among the public is anything like it is within the Broadway community, it looks as though she has a good chance of breaking it even further come this November.

More like this
Eurovision Has Been Given A Whole New Look Ahead Of Its Liverpool Debut
By Bustle UK
The Meaning Of Steve Lacy’s “Bad Habit” Lyrics
By Radhika Menon
9 Photos Of Celebrity Couples & Unexpected Duos At The 2023 Grammys
By Jake Viswanath
What Is Mary J. Blige’s Net Worth? The 9-Time Grammy Winner Is Doing “Just Fine”
By Hugh McIntyre
Get Even More From Bustle — Sign Up For The Newsletter
From hair trends to relationship advice, our daily newsletter has everything you need to sound like a person who’s on TikTok, even if you aren’t.