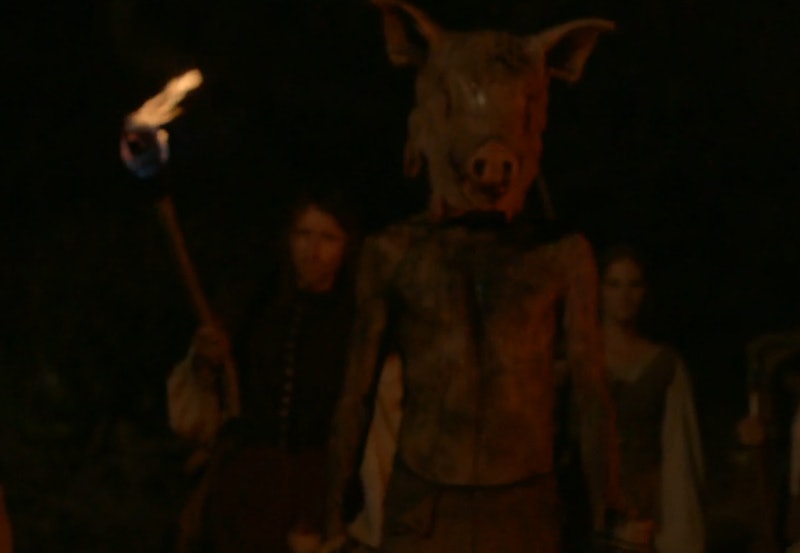 Episode 6 is upon us and you know what that means: That major American Horror Story plot twist is here. From the preview, it seems like Cheyenne Jackson is heading to the famous haunted Roanoke house to see just how true Shelby and Matt’s story is, but that doesn't seem like too much of a twist. Fans will find out soon, but I’m also hoping we finally find out who the Pigman is on American Horror Story . Viewers have yet to see him with his mask off, and I’m wondering if the actor hiding under there is a familiar face. Ryan Murphy loves re-casting the same people and thanks to the pig guy, there’s a solid connection between Seasons 1 and 6.

We first learned about Piggy Man in Season 1 Episode 6, when Modern Family’s Eric Stonestreet appeared as a patient of Dr. Harmon's. He had a phobia of an urban legend about a Pigman who murders you if you look in a mirror and chant, “Here piggy, pig, pig.” I mean, that’s terrifying, but maybe the Pigman from Roanoke is where the that myth actually began.

Whether their connected or not, I’m convinced the man under that disgusting mask is someone we’ve seen in the past and there are quite a few people who it could be.

Matt Bomer is returning to American Horror Story this season, but fans have literally no idea who he’ll be playing. What if he’s been here all along and we didn’t know? It’s a likely scenario.

Could Dandy Mott/Tristan/Rudolph Valentino be hiding under there? He’s been a major returning character for the past two seasons and he’s not currently filming any movies, according to IMDB.

Ugh, it’s been too long since we’ve seen Zachary Quinto on Horror Story and it would be great to have him back. Bloody Face has been missed.

Oh, Dr. Harmon. He’s another face we haven’t seen in a bit, but it would be pretty ironic if he was under the mask, considering he treated a patient who feared Pigman.

Joseph Fiennes was only in American Horror Story: Asylum, but that means it’s the perfect time for him to reappear. It would give us a solid connection between Seasons 2 and 6.

You know what Axeman and Pigman have in common? They’re both great at chopping people up.

The guy who played both Twisty the Clown and John Wayne Gacy could totally be a demented murderer who wears a pig on his head. I could totally believe it. Not to mention he’s been on the last two seasons and has no reason not to continue on with the Ryan Murphy & Co.

The ultimate connection, though, right? He’s scared of it because in some alternate universe he was Pigman.

I am fairly confident that it’s not Adam Levine under the mask, but he’s just here to remind you that he was in fact on American Horror Story: Asylum, and it was awesome. And, hopefully we'll find out the true culprit soon.

More like this
‘Squid Game’ Creator Hwang Dong-Hyuk Just Dropped A Major Season 2 Tease
By Brian Anthony Hernandez and Bustle Editors
'House of The Dragon' Episode 6 Will Take Place A Decade After Episode 5
By Kadin Burnett
The ‘Emily In Paris’ Season 3 Release Date Is Here, Plus The First Footage
By Bustle Staff
The ‘You’ Season 4 First Look Shows Joe’s New Identity And Potential Victims
By Bustle Editors
Get Even More From Bustle — Sign Up For The Newsletter