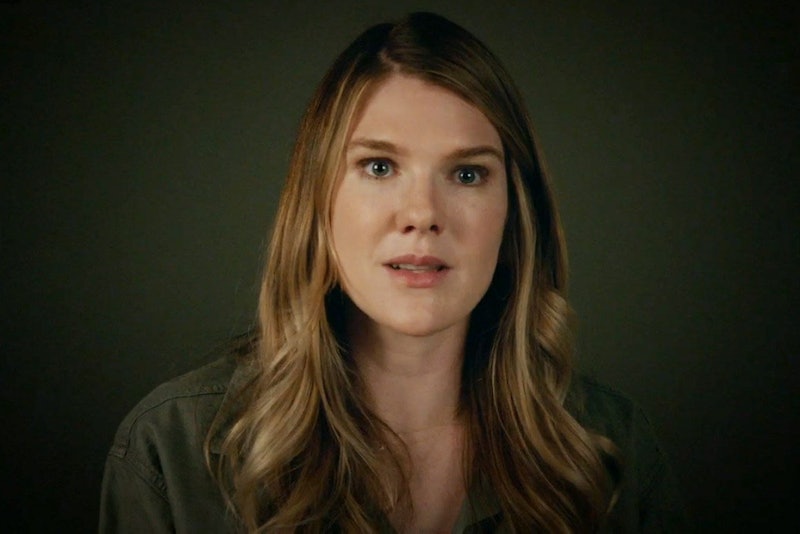 Now that two episodes of Season 6 have premiered and all the months of vague, unrevealing teasers are behind us, it's tempting as a fan to think that we've all solved the mystery of American Horror Story Season 6. We now know the title of the season ( Roanoke ) and we know the plot (a couple whose North Carolina home is haunted by the ghosts of lost colonists from the Lost Colony of Roanoke). But, just because those basic facts about the newest iteration of the FX anthology series have been released, that doesn't mean there aren't still more secrets to uncover. In fact, showrunner Ryan Murphy just revealed to Entertainment Weekly that there's a massive American Horror Story: Roanoke twist coming — and not only that, it's a twist he doesn't think anyone will predict.

Not only did Murphy forewarn us about the upcoming twist, he even went ahead and told us when to expect it… so spoiler alert if you don't want to know anything about the season ahead of time, I guess. "You'll see starting in Episode 6, the show has a huge turn and the thing that you think you're watching is not what you're watching," the showrunner told EW. AHS co-creator Brad Falchuk also added to Murphy's comment, saying that even though everyone now supposedly knows what Season 6 is about, "it's irrelevant because nobody gets what we're doing. No matter what you think it is, it's not that. Then Episode 6 comes and you're like, 'Wait! What happened?'"

This is probably welcome news for those members of the show's audience who are unconvinced by this season's faux-documentary format. It's not surprising if anyone is: The show-within-a-show, titled My Roanoke Nightmare, undoubtedly has some people perplexed. The biggest criticism has been that the existence of the documentary lowers the stakes of the entire season, since we know that Shelby, Matt, and Lee must make it out of their horrifying experience alive in order to be interviewed about it.

But the knowledge that a massive twist is coming throws a wrench in that line of thinking. It certainly seems like whatever the twist is, it will have to do with the season's documentary format, since Murphy said that, "the thing that you think you're watching is not what you're watching." Whether what we learn in Episode 6 simply sheds the documentary in a new light or whether it actually changes up the format completely, abandoning the talking head segments moving forward, it should give skeptics something to be excited about.

There are already a couple of good AHS fan theories floating around that could explain what this "huge turn" is going to be. Some people are of the opinion that everything is the exact opposite of what we're being led to believe: that Sarah Paulson and Cuba Gooding, Jr. are the real Shelby and Matt, while Lily Rabe and Andre Holland are simply playing people pretending to be them. Others think that the interviews and the reenactments are what they appear to be… but that the "real" Shelby and Matt are ghosts being interviewed by medium Billie Dean Howard from Seasons 1 and 4 of the series (also portrayed by Sarah Paulson), which means their counterparts can die in the reenactments at any time.

Then again, Falchuk did say that, "nobody gets what we're doing," so maybe neither of these theories is correct. Or maybe they are, and the creators are just trying to mislead us. There's no way to know until we hit the halfway point of the season; but at least that gives all of us — even those still on the fence about Roanoke — something to look forward to.