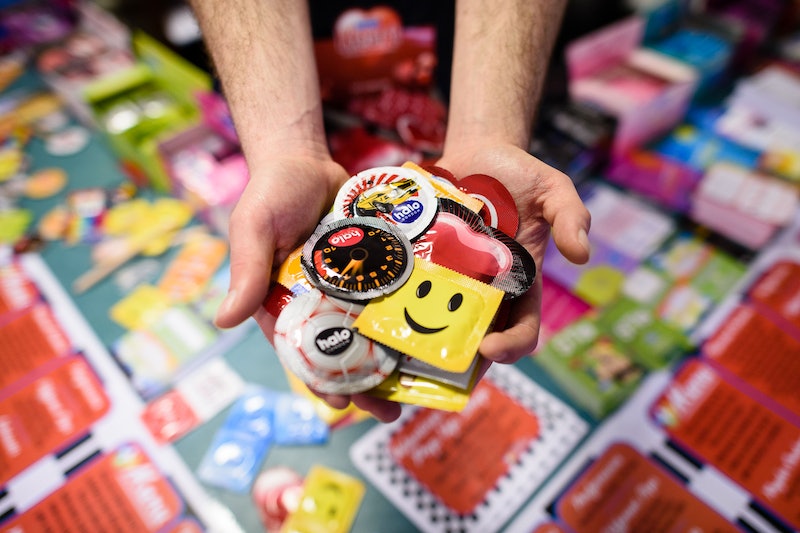 If you have sex that involves penises, you know that condoms are something to be grateful for — when used correctly, condoms are 98 percent effective at preventing unplanned pregnancy, (which is particularly awesome if you, like me, don't take hormonal birth control). They're also 100 percent effective at preventing HIV. Plus, condoms can sometimes help men last longer in the sack.

That said, condoms certainly come with their own unique set of drawbacks, as well. Aside from the fact that (in my experience) condoms can rub your vagina raw no matter how much lube you use, there are also many ways to accidentally make condoms less effective, simply by storing them someplace inappropriate, buying the incorrect size, or using the wrong lube. Though these mistakes may seems small, they can take your condom from something you can rely on to keep you safe from pregnancy and disease, to something that only kind of works.

So whether you use condoms as a way to keep yourself safe from contracting STDs and STIs, as your sole source of birth control, or as protection from both disease and pregnancy, you should be aware that there's a lot more to effective condom usage than you might think. Here are seven things you should know about buying, storing, and using condoms so that they work at full effectiveness. Because totally safe sex is the best kind there is, am I right?

I'm not saying penis size is super important when it comes to pleasure (make your own decisions on that one, folks — though I will note that some of the worst heterosexual sex I've ever had was with an ex-partner who was very well endowed). When it comes to condoms, though, size really does matter.

If your partner's penis is on the smaller side, he should not be wearing large condoms. Period. The condom could slip off of him while he's inside of you (this has happened to me IRL, and it was terrifying), which would immediately put you at risk for unplanned pregnancy. Even if your current partner is working with quite a bit down there, you two should still keep an eye on how well the condoms you use fit his penis throughout your encounter. Because loss of erection can cause condoms to come off during sex, as well.

If you're single like myself, or you're in a non-monogamous relationship, then you might want to consider keeping a range of condom sizes handy. I know condoms can get pricey, but it's worth your sexual health and peace of mind to be as prepared as possible.

2. Condoms With Spermicide Don’t Last As Long As Regular Condoms

I used to think buying condoms with spermicide in them was brilliant, because it's basically like using two forms of birth control in one. Unfortunately, though, condoms that contain spermicide typically only last for two years after their manufacture date, whereas condoms without spermicide can last up to five years.

3. You Should Always Store Your Condoms In A Cool, Dry Place

You probably don't need me to tell you this, but I feel it's important that I cover it anyway: It's never safe to use condoms that haven't been stored properly. To help your condoms last as long as possible and not break during sex, they must be stored somewhere cool and dry. If you haven't done this yet, designate one of your nightstand's drawers as your condom storage spot. Not only will your condoms be safe and sound all by themselves in there, they'll be handy for those times when you want to bang at home.

When you intend to get it on at a sex friend's or a partner's house, don't even think about putting your condoms in your wallet. If you do, you'll risk weakening them by either sitting on them or creating too much friction for them to handle when you open and close your wallet. Instead, try putting your condoms in their own little coin purse before tossing them in your handbag or backpack.

4. Oil-Based Lubes Can Cause Condoms To Break

Ever since I started having sex, I've relied on lube to keep my sex life from being more painful than pleasurable. I feel like this is even more important since I started living the single life last July and stopped taking hormonal birth control last October. For the past few months, I've needed to use condoms for both STD protection and pregnancy prevention, and using condoms without lube tends to make my vagina very sad.

If you love lube, too, or if you're unfamiliar with lube but want to give it a try, awesome! Just remember, it's super important that you only used water-based lubes with your condoms — because oil-based lubes can cause condoms to deteriorate and even burst.

5. Latex Isn’t Your Only Condom Option — But It’s Generally The Cheapest

If you think you might have a latex allergy, rest in the knowledge that there are many more condom options out there for you to choose from. Lambskin condoms are great if you're using condoms solely to avoid unplanned pregnancy, but keep in mind that they're too porous to protect you from STIs. Polyisoprene condoms, like Skyn or Durex Avanti Bare RealFeel condoms, are a reasonably-priced alternative to latex condoms as well. Lastly, polyurethane condoms, like Trojan Supra Bareskin Condoms, can protect you from both becoming pregnant and contracting a disease — and they can do so without making your vagina freak out super hard if you have a latex allergy.

It may seem logical that if one condom = safe sex, two condoms must mean extra safe sex. This couldn't be more incorrect, though. In fact, using two condoms instead of one actually puts you at greater risk for unplanned pregnancy, STDs, and STIs.

In case you don't already know this, when two condoms rub up against each other, it's likely that they'll end up tearing from all that friction. So if your current partner (or any of your future partners) ever suggest "double-baggging" it, just don't let them, OK? There's literally nothing safe about it.

7. Condoms Alone Won't Completely Protect You From All Skin STDs

While using condoms will certainly reduce your risk of contracting STDs and STIs, condoms alone won't protect you from these five skin-based STDs: HPV, herpes, pubic lice ("crabs"), scabies, and molluscum contagiosum. Since all of these diseases can be spread during skin-to-skin contact, not just unprotected sexual intercourse, condoms simply can't keep you 100 percent safe.

Of course, you should definitely always use condoms anyway, but be aware that most of the above conditions can be spread by cuddling naked, performing oral sex without protection, receiving oral without protection, and having vaginal or anal sex without protection. Some of these skin STDs, like crabs, can even be spread by sharing towels with your partner. So while you should of course treat all of your partners with respect and kindness — whether they have one of these skin STDs or not — don't be afraid to play it super safe, either. Check out this article for some in-depth advice on how to keep you and your partners safe from the skin STDs that condoms can't protect you from.

More like this
The Best Time To Date After A Breakup, According To Experts
By Bustle Editors
What Is The Forest Personality Test? The TikTok Trend, Explained
By Georgina Lawton
7 Women Share Their Best Orgasm Stories
By Lexi Inks
Expert Tips For Being On Top When You're Plus-Size
By Lexi Inks
Get Even More From Bustle — Sign Up For The Newsletter