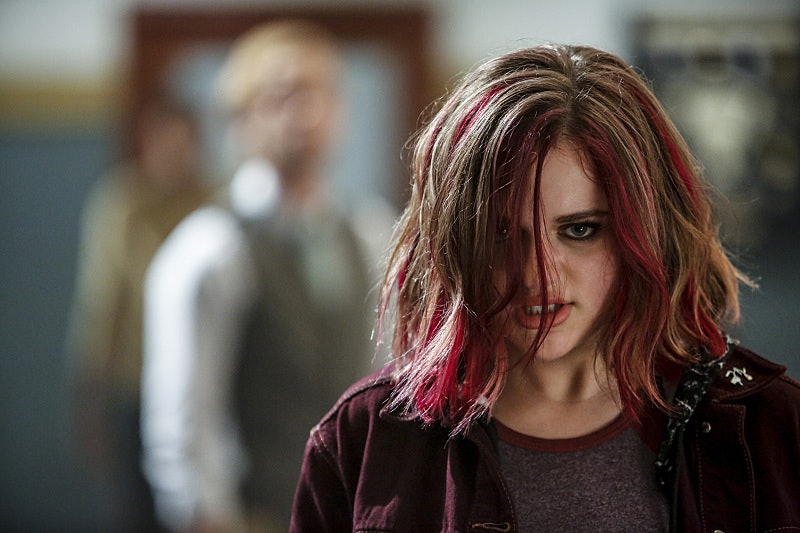 There's a new metahuman in town on The Flash, and she means business. In the the aptly titled Oct. 18 episode, "Magenta," The Flash will introduce Frances "Frankie" Crane, and she is not in Central City to make friends. Played by Joey King (Fargo, White House Down), the new meta will likely be the villain-of-the-week, but that doesn't mean her arrival won't have an impact on the already mysterious overarching plot of Season 3.

According to the official synopsis of "Magenta," Frankie is "a new meta who can control metal" and "terrorizes the city." Sounds like a challenge for Barry Allen, who is already busy fighting Alchemy, regaining the trust of his friends and family, and dealing with a grumpy new office-mate, Julian Albert. However, Frankie might just help Barry out with that last problem. In the newly released clip from the episode below, Julian is seen analyzing Frankie's DNA in his lab after she was taken to the police station, and confronting her for being a metahuman. He pushes her to become Magenta, her meta alter-ego, by accusing her of using her powers to hurt her dad, and it definitely does not look good for Julian.

Other than Julian's imminent danger, the clip also reveals a connection to Magenta's DC Comics origin story. In the comics, Frankie's powers — she can manipulate magnetic energy — come on suddenly, causing her to accidentally kill her father and brother. Her mother then throws her out of the house, and she briefly entertains the idea of being a superhero with Wally's help. It looks like Frankie's onscreen story is also going to play on the idea that Magenta is somehow responsible for hurting her father.

Furthermore, the clip seems to show that Frankie isn't in control of her metahuman side, suggesting that Frankie and Magenta are sort of like split personalities. This also relates to Magenta's arc in the comics, where she suffered from mental illness and was the victim of a S.T.A.R. Labs scientist who gave her split personalities, including the evil Magenta alter ego.

When ComicBook.com reported on King's casting, she was listed as a guest star appearing in the third episode, so it's possible that Magenta will be a one-and-done villain. But that doesn't mean her interactions with Barry, the rest of Team Flash, and Julian won't have repercussions that effect the rest of The Flash Season 3.