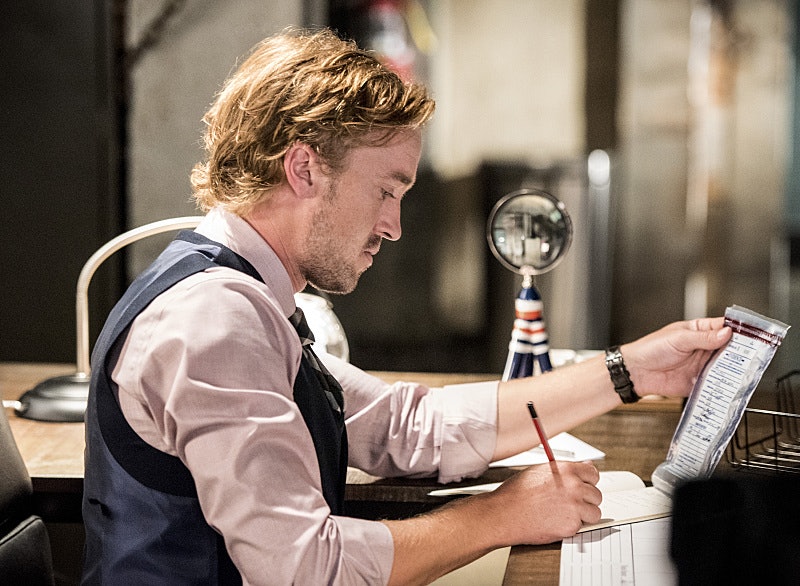 It wouldn't be The Flash without a little identity mystery, and Season 3 has already gifted fans a giant question mark. Two new characters took their first Central City bows in the Oct. 11 episode of The Flash : Doctor Alchemy, a masked baddie with a very scary voice; ; and Julian Albert, Barry's officemate and his work nemesis too. You can't look at these circumstances without at least briefly wondering if these two characters might be one and the same. At first glance, Julian Albert seems to be a Grumpy Gus (every workplace has one!) who isn't dazzled by Barry's winning smile. But by the end of the episode, Julian's manner gets dark as he tells Barry that he just doesn't trust him. How deep does this dislike go? Could Julian Albert be Doctor Alchemy?

If Julian is Doctor Alchemy, he certainly picked the right respectable position from which to get some evil work done. So far, Doctor Alchemy is operating like a metahuman fairy godmother, giving back powers to anyone who lost them after the events of Flashpoint. And since Julian is the CCPD's forensic metahuman expert, those motivations jive. And The Flash has a history of revealing that parties close to Barry and friends have been working against them; Julian isn't striving to be buddy-buddy with Barry, but that could be a strategy to throw off suspicion. Fans on Reddit are already collecting evidence that Julian is Doctor Alchemy, so this is a fan theory with legs.

The Flash Season 3 is barely out of the gate, but it's never too early to start theorizing. Here are a few hints that point to Doctor Alchemy and Julian Albert being the same man.

Julian Is Played By Tom Felton

He's the star of one of the most popular fantasy movies series of all time and known for his ability to play a conflicted villain. You don't get the guy who breathed life into Draco Malfoy to play some frustrated lab rat. Whether or not Julian is revealed to be donning Doctor Alchemy's hood, there's definitely something big in store for Felton's character. (Also, the only actor currently credited for Alchemy is Tobin Bell, who provides his voice.)

Julian Really Hates Barry, But Stays Close To Him

Granted, they don't seem to be sharing space by his choice. But it's very interesting that Julian is afforded the opportunity to watch Barry work; observe his professional interactions; and see how he and Joe approach cases. Plus, that roiling dislike of each other may keep Barry from asking too many questions.

Julian knows his metas; so does Doctor Alchemy. In the comics, Alchemy's alter-ego is Albert Desmond. Desmond is also a scientist — a chemist — and he uses his knowledge of the periodic table in conjunction with the real Philosopher's Stone to transmute elements and make life miserable for The Flash. Coincidence? Maybe. Maybe not.

Julian Only Turned Up Post-Flashpoint

In the post-Flashpoint universe, Julian has evidently been in Barry's life for a year. But Barry has no memory of that and therefore, neither does the audience. Thus, it's damn near impossible to put any trust in this guy. Where was Julian before Flashpoint? Where was Doctor Alchemy, for that matter? And why are they on the same schedule?

Of course, the major argument against the Julian-is-Alchemy theory is that it's just too obvious. Or maybe that's what they want fans to think. The Flash has proven to be pretty adept at mind games, and they've introduced one interesting conundrum for audiences to pour over as the season goes on.