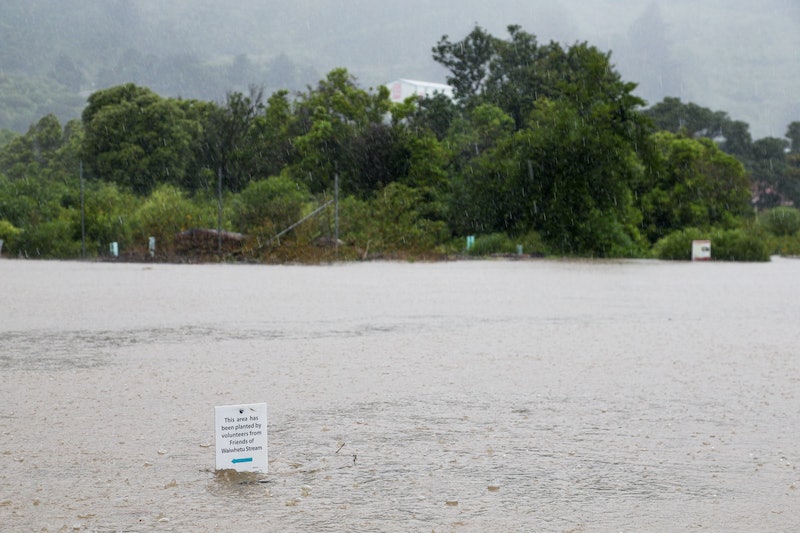 By this point, you probably know that climate change is a very real and persistent threat to our future quality of life — a 2016 Gallup poll found that 64 percent of Americans described themselves as "worried a great deal" or "fair amount" about global warming; it also found that 41 percent of us felt global warming will become a "serious threat" to our lives or way of life, and only 10 percent of Americans believing that the effects of global warming will never make an impact in our lives. Despite all this, it can be hard to connect the scientific facts, or the news from far regions of the world, to our daily lives — but as people with power continue to deny the impact of climate change (exemplified by the news that President-elect Trump has picked climate change skeptic Myron Ebell to lead his EPA transition team), being aware of the real impact of climate change has become more important than ever. And we don't have to wait to see what that impact is — with each passing month, climate change affects more things about how we operate, from the minutiae of daily living to our long-term plans.

Recently, Hurricane Matthew joined the ranks of recent hurricanes like Sandy and Katrina that reached new highs of catastrophe. Destructive hurricanes are not a new phenomenon in the Southeastern United States, and no individual hurricane can be directly attributed to climate change, but the increasing frequency and severity of these storms is directly correlated to global warming — as temperatures rise from the surplus of greenhouse gases in the atmosphere, the ocean heats up, and warm tropical waters create more powerful hurricanes.

Scientists predict that global warming will also cause increased rainfall in the eye of hurricanes, which will increase flooding — which, in turn, creates some of the most drastic long term effects on daily life after a hurricane, from damaged roads to loss of property. For people who live in areas that are susceptible to hurricanes, this means a great deal of future planning for protecting assets and loved ones. However, Southern coastal states aren't the only ones that have to worry about the severe weather of climate change.

2. Wildfires Are More Common In The West

While the South works to recover from hurricanes and prepare for future storms, the West Coast is consistently plagued by wildfires. When you live in California, wildfire advisories become the norm, especially in arid desert and inland areas. Due to drier land and less rain, the wildfire season is longer and creates more opportunity for fires that have severe impacts on quality of life.

The increase in the number of these fires isn't just a suspicion — in the 80's, the average number of wildfires per year larger than 1000 acres was 140; in the 90's it was 160. But from 2000-2012, the average jumped to 250 wildfires per year. When fires are that severe and frequent, it makes it difficult for people to create a steady lifestyle, and possessions are always at risk. And the catastrophic effects of wildfires on human life are far-ranging — they increase lung disease, damage property, and cost both individuals and the state exorbitant amounts of dollars.

3. Drought Is Spreading Across The Nation

One of the reasons that wildfires are so rampant is the dry land from the ongoing drought in California. The drought's effects range from the big scale wildfires to little everyday changes — for instance, in California it's illegal for restaurants to serve a customer water unless they specifically request it.

The drought in California is well publicized, but other areas of the United States are also suffering from lack of rainfall. In the past few months, areas of Maine, Vermont, Massachusetts, Western New York, Alabama, and Georgia, have reached 'extreme' levels of drought. There needs to be more acknowledgment of the widespread drought, because there are so many things the average person can do to decrease their water consumption — but many believe they don't have to worry about it if they live in the Midwest or East Coast.

It can be hard to believe that a bunch of the country is experiencing a drought, because the summer seemed to be so infused with moisture in the form of humidity. This summer's unbearable heat was record breaking, as with much other weather in 2016. Every month this year broke a new heat record, and heat waves lasted longer before breaking. In fact, this July was the hottest month in history since heat indexes became easily measurable!

These are only the things we can feel on the ground. Around the world, extreme heat is melting the polar ice caps, creating low sea ice, and going so far as to change the ecology of the Arctic circle — the ice on the Arctic sea now covers 40 percent less area than it did in the late 80's.

Unfortunately, allergies are just the beginning of the health risks associated with climate change.

5. Our Electric Bills Are Higher

What do you do when the temperature outside gets more and more unbearable? If you're like most people, you turn up the AC. Obviously, the more you use your air conditioning and the higher the power levels it is set at, the more it will cost you at the end of the month.

In the coming years, electric bills are likely going to be higher than usual — not just from using appliances more, but also because the costs associated with the services are going to become more expensive. Heat waves decrease the productivity of power plants, and as a result, they'll be charging more for the same services. Blackouts are also likely going to increase, and the pressure of compensating for those power outages will put more costs on the power plants, which will be transferred back to the consumer.

6. Everything Is More Expensive

Your bills aren't the only rising cost due to climate change. Inflation is a normal part of our daily lives, so we don't always notice when prices at the grocery store go up; but in recent years, food costs have been inching up as a result of the pressure that climate change puts on farms. All of the factors mentioned above — storms, drought, and fires — destabilize farm land and make it much more difficult for farmers to produce high crop yields. The smaller supplies make it necessary for farmers to raise prices across the globe.

Beyond agriculture, many other industries are seeing increased costs due to climate change. The coffee industry, which depends on specific locales to produce sought-after types of beans, goes into crisis when those areas are plagued by extreme weather. Experts in the fashion industry also worry that extreme weather will result in higher prices on clothing.

7. Allergies Have Intensified (And That's Just The Beginning Of The Health Risks)

Were you sneezing more than usual this spring? It's possible that worse-than-average allergies were triggered this year by climate variations. Higher temperatures for longer periods of time mean that pollen has more months to release and live in the air, and pollen is the most common cause of allergies. Even if you've never suffered from allergies before, you aren't necessarily safe; increased long-term exposure to pollen can create symptoms even in people who have never had allergies.

Unfortunately, allergies are just the beginning of the health risks associated with climate change. In the coming years, we're likely to see increases in infections, risks from contaminated food and water, the spread of disease, and decreased immunity.

All of these things are often interconnected — for instance, the dry land from the drought makes fertile ground for wildfires, and then the ash from the wildfires makes people sick, or makes sick people sicker. According to the National Association of Geoscience Teachers, "Woodsmoke exposure can depress the immune system and damage the layer of cells in the lungs that protect and cleanse the airways," creating long-lasting damage.

As the effects of climate change on daily life become more obvious, they'll also become more entangled and likely get worse. Climate change is no longer a distant threat — it's happening now, and charting its effects on our daily lives is one way to prepare for the future.