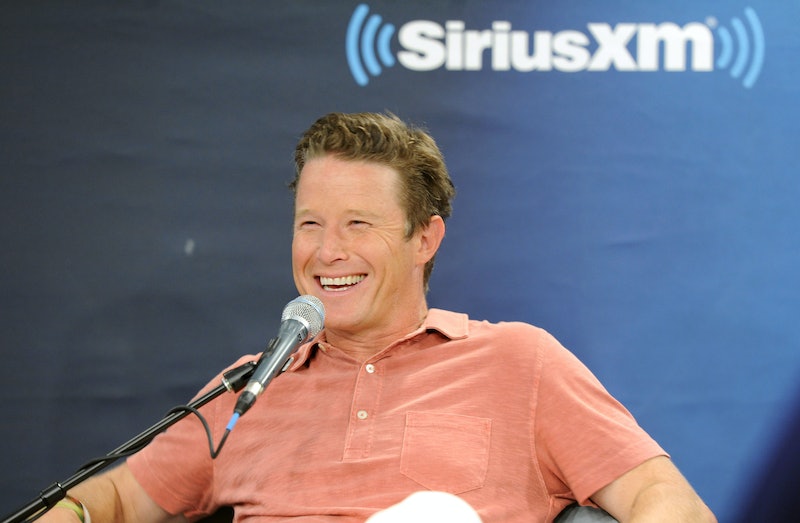 Following the outrage over his 2005 interview with current Republican presidential nominee Donald Trump, former Today host Billy Bush was officially terminated from the show by NBC on Oct. 17, complete with a memo to NBC employees that wished Bush success in the future. What that future may hold is a mystery, though, because no one really knows what Bush is doing now. He's been keeping a low profile since his very high-profile termination.

Bush has yet to announce any career plans for his post-NBC life, and his future in broadcast journalism doesn't seem necessarily assured. But for now, he seems to be staying out of the limelight and trying not to cause any more problems.

"While he was a new member of the TODAY team, he was a valued colleague and longtime member of the broader NBC family. We wish him success as he goes forward," read NBC's memo regarding Bush's firing, which was widely circulated among media outlets. Bush released his own statement about the settlement, apparently showing that he's grown from the experience, and anticipates more growth in the future. “I am deeply grateful for the conversations I’ve had with my daughters, and for all of the support from family, friends and colleagues,” he said. “I look forward to what lies ahead.”

However, it's unclear just what lies ahead for Bush. It's possible that another network could hire him, but nothing's been announced or even rumored yet. According to the Associated Press, Bush's termination settlement didn't include a non-compete clause, so he could start working somewhere else right away, but that obviously depends on whether anyone wants him. This scandal definitely left a permanent mark on Bush's professional reputation, and it's likely to affect the rest of his career.

What is clear is that he won't be donating his $10 million termination settlement to women's charities, mostly because it doesn't exist. Bush got wildly trolled on Twitter over the weekend as people tried to pressure him into making a giant donation to make up for his lewd remarks, but his lawyer confirmed that Bush had not even received a settlement by the time the meme was born. It's still not a bad idea. Depending on how much Bush needs the good press, it could help rehabilitate his image.

Perhaps, ironically, a future in politics is Bush's path forward. Given that Trump, the one who made the most inexcusable remarks on the recording, has still kept his position as the presidential nominee, it seems to be a more forgiving industry than journalism. His famous family, which includes former presidents George W. Bush and George H.W. Bush, could lend him the credibility he needs to start a campaign. Since he's already got the name recognition, he's halfway there. It's not his chosen career path, exactly, but falling back on the family business is always an option.