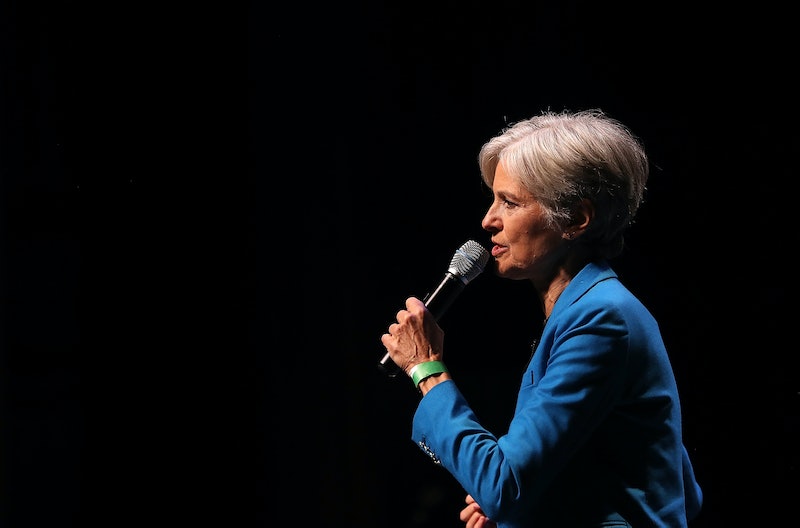 The Green Party's Jill Stein didn't make it to the presidential debate stage; her poll numbers never got close to the 15 percent minimum requirement established by the Commission on Presidential Debates. But she'll be participating in the final debate on Wednesday in her own way. Stein will host a presidential debate in which she answers moderator Chris Wallace's questions along with Hillary Clinton and Donald Trump, though she will not be in the same room as the candidates. Beginning at 9 p.m. ET, you can watch the expanded debate on Stein's Facebook page or her YouTube channel.

"The American people want more candidates on the debate stage," said Meleiza Figueroa, press director of the Stein campaign, in a press release obtained by Bustle. A recent USA Today poll found that 76 percent of Americans want to see four podiums on the debate stage. "The Commission on Presidential Debates, a private entity controlled by the Democratic and Republican parties and their donors, refuses to host the debate the public wants to see. On Wednesday night, the Stein campaign is going to give the public that debate." The Commission on Presidential Debates refers to itself as an independent, nonpartisan organization.

Stein, along with fellow third-partier Gary Johnson of the Libertarian Party, have argued that candidates on the ballot in enough states to possibly win an electoral vote majority should be admitted to the debates. The two candidates filed a lawsuit against the Commission on Presidential Debates in September 2015, accusing the commission of violating the First Amendment in addition to antitrust law. A judge dismissed the lawsuit in August.

On Wednesday, three-quarters of Americans who want more candidates on the stage can get a little closer to the kind of debate they'd like to see by tuning into Stein's expanded debate livestream. Though we won't get to hear the major-party candidates respond to Stein, we'll at least hear a different voice representing views beyond the scope of the two dominant parties — something that many who are dissatisfied with our major-party options will likely find refreshing.