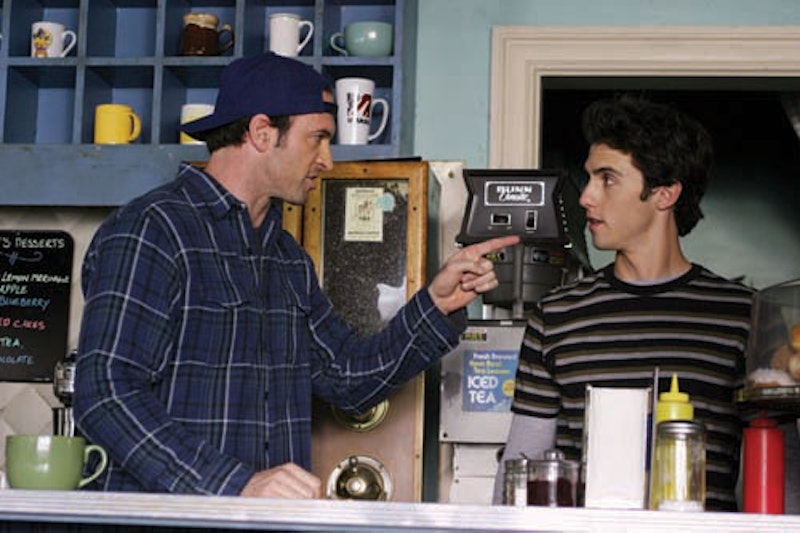 There is still so much unknown about the Gilmore Girls revival, but based on new photos of the Netflix reboot that were released Tuesday fans now know a little bit more about what's going on in Stars Hollow. For example, there is a Gilmore Girls revival photo of Luke and Jess arguing at Luke's diner. What the heck is this beloved uncle and nephew duo arguing about now? Obviously, they could just be talking and not fighting, but when has that ever happened with these two? Whatever the case, it sure looks like Luke and Jess are not seeing eye to eye here, and I have some ideas as to what might be going on.

First, Luke's face and hand placement say it all. It looks like he is in the middle of telling his nephew what he did wrong, why he is wrong, or how he needs to fix a situation. Then, there is Jess. (By the way, has Jess ever looked better? He still pretty much looks like the same person as when the series ended — just like his uncle — wearing his typical color scheme and snazzy jacket.) Jess almost appears to be defending himself against Luke and disagreeing with whatever he is saying.

There's a high possibility Luke and Jess are talking about Rory. Why else would Jess be back in Stars Hollow? It has to be to see Rory, who Luke loves and protects like she's his own child. Maybe Luke doesn't want Jess to break Rory's heart again? Or, you know, they could also be sitting down to discuss Jess' mother/Luke's sister, who always managed to cause issues between the uncle and nephew.

Obviously, whatever is going on here has to do with a new storyline. There has been so much speculation about what the revival will show, but seeing as this photo of Luke and Jess is from the last episode, "Fall", maybe Jess (who is set for three episodes) is sticking around to try and win back Rory's heart before it's too late. It's still unclear who she'll end up with anyone, if anyone, but Dean, Logan, and Jess are all returning. What if Rory chooses Dean or Logan and Jess wants to change her mind? That is a good reason for Luke to give him a talking to. Of course, there is also the option that Rory chooses Jess and now he is freaking out. That's where Luke comes in to tell him to get it together and not mess it up this time around.

Milo Ventimiglia chatted with Entertainment Tonight in April and revealed that Jess is still pretty much the same as fans remember him. "I thought it was nice that he's [still] that Jess-kicking-ass that everybody kind of liked — the bad boy that he was." He added, "But also, the kid always had a heart of gold, he really did. He was just a misguided, troubled, reckless, rabble-rouser." Seeing as he is the same old Jess, then he clearly is going to be causing some type of trouble and something that may upset Luke.

Ventimiglia also dished that based on Jess' past, viewers probably won't be shocked by the "guy he turned out to be at the very end." He even mentioned that Jess "pops into Stars Hollow" to "accomplish" something. Who knows what that means, but whatever he tries "accomplish" may not to go smoothly.

Whatever is happening in the photo, Luke and Jess clearly haven't changed and still can't help but show how much they love one another through heated conversations.