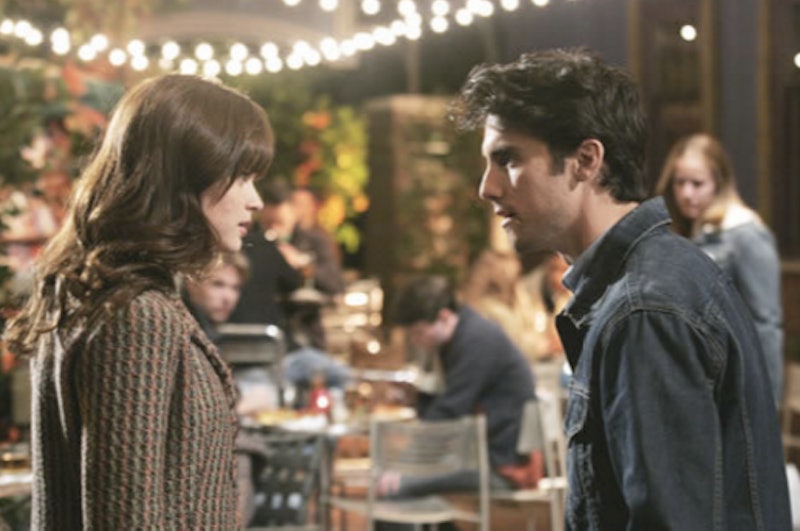 The Gilmore Girls news keeps rolling in, and the latest comes in the form of an interview with TVLine by Milo Ventimiglia, who plays Jess Mariano. If you thought that confirmation Jess would be back for the Netflix revival of Gilmore Girls was exciting enough, prepare yourself because the actor who plays him just gave away some super interesting details. So, what can we discern from Ventimiglia's interview about whether Rory and Jess are back together in Gilmore Girls ? Is Jess likely to appear throughout the four episode season? How will Rory make an informed decision with all of her hot ex-boyfriends back in Stars Hollow? I'm feeling a little hot and bothered just thinking about it.

Along with giving the best answer ever to the question of who Rory should end up with — "The fans are a better authority about who Rory should possibly be with or could be with" — Milo Ventimiglia also revealed some important details about his character. Coy as ever, when asked how many of the four Gilmore Girls episodes Jess would be in, Ventimiglia said, "I would say more than two, less than four." Ever the tease, the actor was charming and reminded fans why Jess Mariano was such a strong contender for Rory Gilmore's heart. But will Jess and Rory get back together?

We know that Rory is single at the start of the Gilmore Girls revival. The fact that all of her ex-boyfriends are back for the new episodes seems to suggest that Rory will rekindle a romance with at least one of them. Jess was always a fan favorite, and news via TVLine that he'll appear in three out of the four new episodes suggests that, once he turns up, he's going to stick around. As Ventimiglia said of Jess, he's ready to "strap on his leather jacket and pop back in to shake things up."

As Logan and Dean are also back for the Gilmore Girls revival, it's possible that Rory will have more than one romantic entanglement on the show. There's also a chance that a new guy might appear in Stars Hollow and capture Rory's heart. If Jess is back for three out of four episodes, it looks likely that he'll appear in the second episode, and stick around until the end. Proof of this comes from Ventimiglia's TVLine interview, in which he confirms he's not started filming his scenes yet — "I’m looking forward to being back on the Warner Bros. lot. I feel like it’s the studio that raised me, so it’ll be a nice homecoming." No-one can disagree with that.

While Ventimiglia's interview with TVLine is an interesting development for Gilmore Girls fans, it's far from conclusive plotwise. Still, the fact that Milo Ventimiglia has been booked for quite so many episodes of the revival is a positive sign for Jess and Rory fans, as the actor is likely going to feature quite substantially.

More like this
'Gilmore Girls’ Lauren Graham Just Revived Our Hopes For A New Reunion
By El Hunt
The First Trailer For 'That '90s Show' Includes So Many Nods To The Original Series
By Jack Irvin, Alyssa Lapid and Grace Wehniainen
The 'Firefly Lane' Book Ending Teases Way More Tears To Come In 2023
By K.W. Colyard
Everything To Know About 'Firefly Lane' Season 2 Part 2
By Gretchen Smail
Get Even More From Bustle — Sign Up For The Newsletter