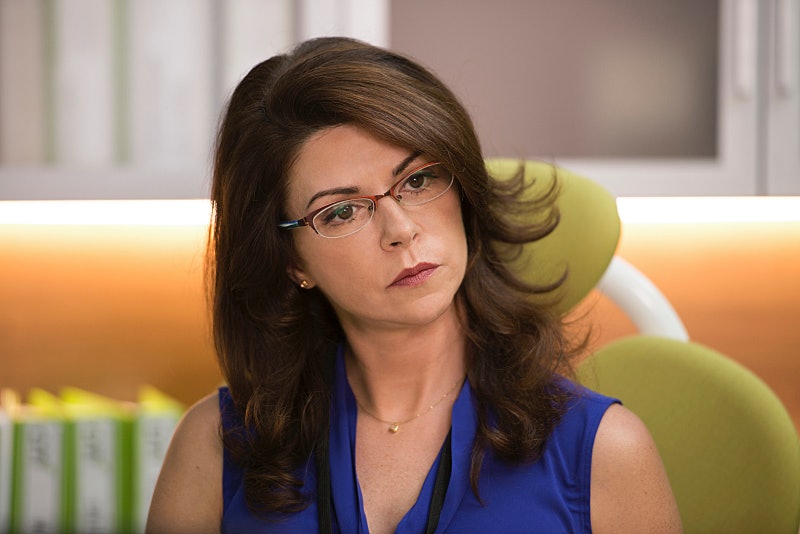 Could we have an amazing new couple in Deirdre and Hank on No Tomorrow in our midst? As we rolled deep into the third episode of the season, it seems that there was finally — finally — some traction in the Deirdre/Hank department. Despite their mixed signals and pratfalls in the previous episodes, I have some very real hopes and fears that Deirdre and Hank's potential relationship could be just as doomed as Evie and Xavier's, except the former couple is doomed not because of the apocalypse, but because of some workplace relationship restrictions. You've to go admit it: As odd a couple as they are, Deirdre and Hank are actually kind of cute together. Right? Am I the only one who thinks that?

Things have been heating up for a while with Deirdre and Hank. After bringing Evie on as a matchmaker/love coach hybrid, Deirdre has been leaning on Evie to help facilitate situations where she and Hank can get to know one another better. This week, Deirdre finally hit a crucial point in the development of her relationship: the "Now or Never" point, as it were. After purchasing for Hank various accoutrements for his desk chair, including a fan and a cup holder, Evie encouraged Deirdre by assuring her that Hank would, in fact, notice her advances and things would turn out for the best.

Less than impressed and thinking all hope was lost, Deirdre was settling in for a night of drinking her cares away when Xavier told her to actually tell Hank how she was feeling. Loaded up on plenty of "carpe diem"-inspired gusto, Deirdre seized her chance when she joined Kareema and Hank at their local pub quiz. There were aftershocks, both physical and emotional, for Hank. Suffice it to say, I genuinely think that this is the start of something beautiful.

While Hank was physically stirred by the Lauren Bacall-esque, sexpot way she told him a very banal fact (causing him to announce he had an internet girlfriend and run out of the room unexpectedly), it seems like there is still room for Deirdre and Hank to actually get together. The only major snafu now? Hank is the union rep for Cybermart and that could pose big problems further down the line for these star-crossed lovers. Are Deirdre and Hank doomed or will they be able to find a little bit of relationship bliss before the world ends?