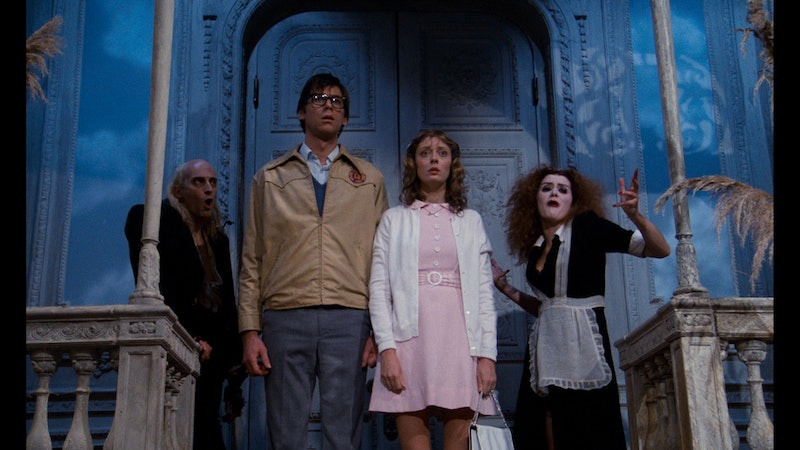 I'm so glad I live in a world where there are Octobers, because Halloween is (in my humble opinion), the best day of the year. You don't even need to wait until Oct. 31 to celebrate — you can start by watching some beloved Halloween movies. FOX's new production of the cult classic The Rocky Horror Picture Show will air on Thursday, Oct. 20 and introduce a new generation of viewers to the musical horror comedy (an admittedly unusual genre). For longtime fans of the movie, it'll be exciting to watch the new version, which stars Victoria Justice, Laverne Cox, and Ryan McCartan. After watching the TV adaptation, you may be clamoring to experience the original — so you should know which theaters have Rocky Horror Picture Show midnight screenings in 2016.

When The Rocky Horror Picture Show was released in 1975, it received critical disdain rather than critical acclaim. However, the negative reviews didn't stop audiences from becoming increasingly enthusiastic about the movie — especially at its midnight showings. It became an interactive experience as audience members arrived dressed up as their favorite characters and talked back to the screen. If you're thinking this sounds like a complete blast, you're not alone — the tradition continues to this day and, as Halloween approaches, a number of movie theaters will offer midnight screenings of the cult classic.

Here's where you can catch midnight showings in order to celebrate Halloween weekend in the best way possible:

The Loft Cinema in Tucson will host it's 38th annual "Rocky Horror Halloween Bash" on Saturday, Oct. 29. The event kicks off at 11 p.m. so there's time for a few pre-show games before the Time Warp begins at midnight. And there's a real incentive to enter the costume contest — the winner receives a $100 prize.

The Art Theatre in Long Beach hosts midnight showings of The Rocky Horror Picture Show every Saturday night (now that's what I call dedication). Costumes and audience participation are always encouraged, but I predict the crowds will be even more enthusiastic than usual during the spookiest month of the year.

AMC Universal Cineplex in Orlando: Saturday, Oct. 29. (Note — this showing begins at 10 p.m., but it'll be just as much fun as the others.)

The Uptown Theatre in Minneapolis: Friday, Oct. 28 and Saturday, Oct. 29.

Clinton Street Theater in Portland: Saturday, Oct. 29. There will also be an 8:30 p.m. screening on Halloween night.

If your city isn't on this list, don't despair — you can always organize your own midnight viewing party, complete with props and a costume contest.