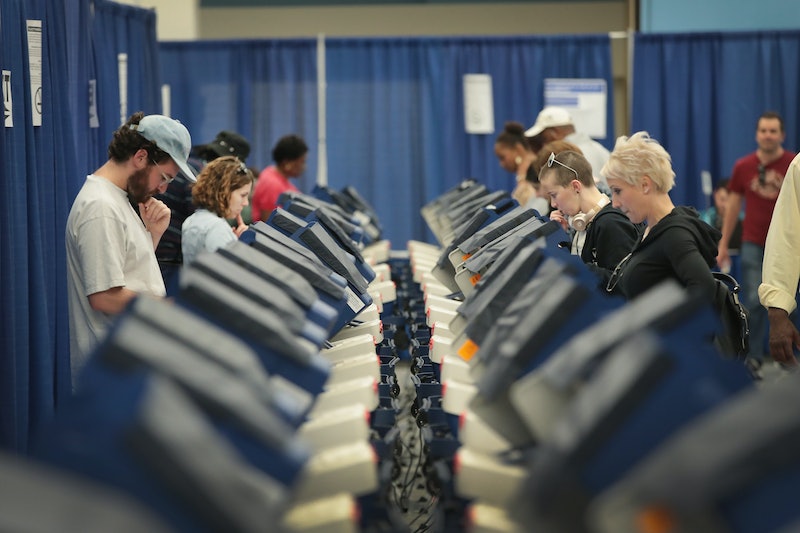 In a presidential election in which neither major candidates have high approval ratings, it's no surprise that there's a lot of talk about third parties and write-in votes. While how you write in a vote may seem like a simple process, there's actually a lot more thinking to do if you want to make sure that your vote will be counted.

If you're just talking about how to actually do it, there are really just two steps. First, decide who it is whom you want to vote for, whether it's a third-party candidate who didn't make the ballot in your state, another politician in the party, or your co-worker who you really think would be the best man (or woman) for the job. Second, show up to vote and fill that person's name in the space given, whether you're voting on a computer screen or with a paper ballot. There will be a space for write-in candidates on most ballots, and you are welcome to use it.

There are, however, several things that you should research beforehand, or at least keep in mind while you're making a decision about this. Most importantly, many states require that write-in candidates be registered. This means that unless the candidate has filed the required paperwork, and likely also paid a fee, your vote will not be counted if you vote for them. Another nine states on top of that don't allow write-ins at all. Only seven states allow write-ins without registration (that's Pennsylvania, New Jersey, Vermont, Rhode Island, New Hampshire, Iowa, and Oregon, in case you're interested), and even if your write-in candidate of choice won majorities in all of those states, they would only receive 58 electoral votes.

That means that unless you're voting in one of the states listed above, your vote for your mom or your favorite high school teacher will be thrown away with all of the votes for Mickey Mouse and "a gay dog" (no really, that actually happened at least once).

In all seriousness, this is important to consider if you're supporting a third-party candidate. While Gary Johnson has ballot access in all 50 states plus the District of Columbia, Green Party candidate Jill Stein only has ballot access in 45 states plus D.C., and of those remaining, not all even allow write-in candidates. So if you're voting in Nevada, Oklahoma, or South Dakota, you won't have a chance to vote for Stein. If you're still on the Bernie Sanders train, take a close look at your state's write-in voting rules, as Sanders is not registered as a write-in candidate anywhere. For any other third-party candidate you're considering voting for, check a list of write-in candidates for president to make sure that your vote will be counted.