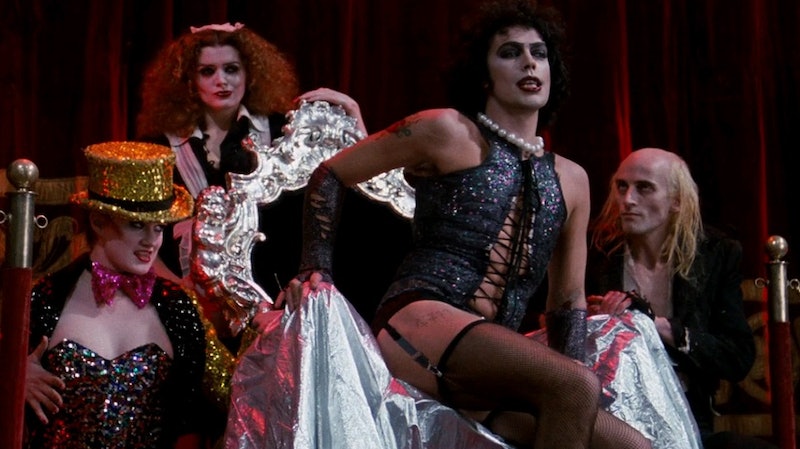 Very few films have reached the kind of cult status that the original Rocky Horror Picture Show has managed to achieve. This super campy horror/comedy/musical has spawned millions of midnight showings and has pelvic thrusted its way into our lives even 41 years later. It was a bold move for FOX to take it upon itself to reboot this cinematic unicorn, but with Tim Curry making a cameo and slapping his seal of approval on the finished product, I'm on board. But, speaking of the original Dr. Frank-N-Furter, what is the original Rocky Horror cast doing now?

Well, it looks like they have all been busy and successful since they starred in one of the most beloved musical films of all time. It's not like these people will be able to just fade into obscurity, since their performances are watched over and over to this day. Of course, it's now hilarious to think about Meat Loaf bursting through a wall on a motorcycle and Susan Sarandon singing, "Toucha Toucha Touch Me," considering that these people went on to do even more after they left Dr. Frank-N-Furter's house. Here is what the original cast is up to now.

Curry has been a busy guy since his stint in fishnets and heels. Dr. Frank-N-Furter was his first role and his brilliant performance opened up endless opportunities in his career. Some of his most notable roles include Rooster Hannigan in Annie, Hexxus in Fern Gully (remember "Toxic Love"?!), Pennywise the clown who ruined you for life in It, and Nigel Thornberry in The Wild Thornberrys. He has also done voice work for Star Wars: The Clone Wars and made appearances in The Hunt For Red October. Unfortunately, he hasn't been in the public eye as much after suffering a stroke in 2013, but he is playing the Narrator in FOX's Rock Horror Picture Show: Let's Do The Time Warp Again.

Because of what she has accomplished since, I always forget that she was Janet in the original Rocky Horror. She is probably best know for starring alongside Gina Davis in Thelma and Louise. Sarandon has also appeared in Dead Man Walking, The Lovely Bones, Zoolander 2, and 30 Rock. Now you can catch her starring as Bette Davis in the new Ryan Murphy series, Feud.

After taking on the role of Brad, he went on to appear in Spin City, Girlfriends Guide to Divorce, CSI, Cougar Town, Scandal, Masters of Sex, and voiced Grandpa Clyde in Phineas and Ferb.

Playing one of best characters (in my opinion) definitely has its perks and O'Brien seems to appreciate the cult status of his role. He is listed as a screenwriter for the original Rocky Horror and also for the remake. He has appeared in a ton of television roles and films like Robin Hood and Dark City. He's also lent his voice to Phineas and Ferb and starred in the West End production of Rocky Horror Picture Show for 11 performances in 2015. That's commitment.

This Irish actress who played Magenta flawlessly has gone on to appear in Monty Python's: The Meaning of Life, The Lords of Salem and Shock Treatment. Like most of her co-stars, Patricia appreciates the role that made her famous and shows up at a lot of screenings and events for the film.

You remember the shorts. Well, nowadays Hinwood has left acting behind. That may be for the best, because, in my opinion, there's nowhere else to go after playing Rocky Horror. You have reached the pinnacle of awesome. After leaving acting behind, Hinwood told People that he is now an art/antiques dealer in London who relishes "a peaceful and quiet life." He also mentioned that he "cringes" every time he watches himself in the film. You were great, Hinwood!

I always just picture him crashing through a wall on a motorcycle when I see Meat Loaf. Maybe you immediately think about his music video for "I Would Do Anything For Love." Either way, Meat Loaf has been super successful since his debut film role. He has made appearances in Wayne's World and Fight Club and his album Bat Out of Hell went on to sell more than 43 million copies, according to the AV Club.

Unfortunately, Adams passed away in 2005 at the age of 74, according to CNN. Before his death he starred in a myriad of British television programs and a handful of films.

The original narrator, and the man who told us how to do the Time Warp again, unfortunately passed away in 2000 at the age of 71, CNN reported. Like Jonathan Adams, Gray was a regular on a ton of British television shows and was notable for playing Blofeld in the James Bond film, Diamonds Are Forever.

And, although the film is being remade for TV, this original cast will live on forever in fans' hearts.

More like this
What Does Nancy Jo Sales Think Of 'The Real Bling Ring'?
By Arya Roshanian
Netflix Reveals First Look At Wednesday In The 'Addams Family' Spinoff Series
By Bustle Editors
'Survivor' Is Finally Coming Back To UK Screens
By El Hunt
The Bling Ring's Alexis Neiers Has Come A Long Way Since Her 'Pretty Wild' Days
By Sophie McEvoy and Arya Roshanian
Get Even More From Bustle — Sign Up For The Newsletter