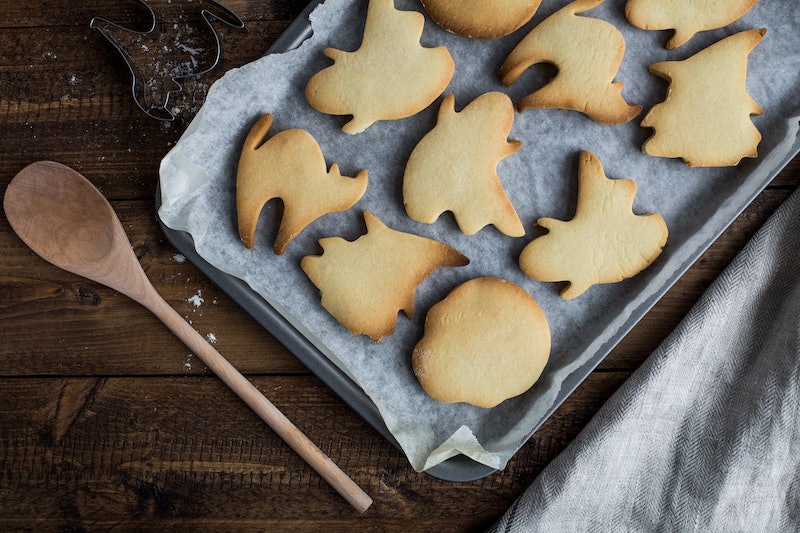 For me, the fun of Halloween isn't in the costumes or the candy, but in the spooky Halloween stories about witches, ghosts, and vampries. After all, isn't that what Halloween is about? Stepping off the lit path, opening the door you know you shouldn't. Discovering that your world isn't precisely what you thought it was. Taking a step... or two... or three outside of your comfort zone.

On this list we have stories of witches, from IRL paganism to different witch cultures around the world. We have heaping helpings of the undead: zombies, mummies, ghosts, and vampires. No matter what kind of creature, each one of these books shows a different spin on how they can interact with society. No matter which creature catches your eye, these books will certainly show you a new side to the things that go bump in the night.

So, as you're pulling out your candy corn and carving your Jack-o-Lantern, give your traditional Halloween a little spin.

1. Witches of America by Alex Mar

In this riveting nonfiction, Alex Mar dives deep into the real, expansive world of modern witch-hood, even dipping her toes into her own practice. An eye-opening exploration of American Paganism and the impact of religion, this book is fascinating on every level.

In this fast-paced read, vampirism is an STD in modern-day New York City. We follow Cal, who as a carrier for the disease, has inadvertently turned all his girlfriends into vampires, and is now working to capture them and put them in a safe facility. But Cal might be on the verge of discovering something even more sinister than vampirism...

The first book in a splendid urban fantasy series, Moon Called follows Mercy Thompson, a mechanic who also has the ability to turn into a coyote. Mercy lives in a version of our world where werewolves, gremlins, vampires, and other "spooky" creatures live side-by-side. As she gets pulled into a mystery, you'll be turning the pages lightning fast.

4. Bats of the Republic by Zachary Thomas Dodson

In this remarkably designed book, you experience the story in the form of first-person documents, that take you between post-apocalyptic and 19th century Texas. At the heart of it all is the story Zadock Thomas, tasked with delivering a secret and vital letter. (The letter itself is sealed in an envelope that dares you not to open it.) As Thomas travels across Texas, he becomes enchanted by the majestic bats that make their home there.

5. Pride and Prejudice and Zombies by Seth Grahame Smith

This modern classic has put a twist on an all-time favorite, injecting zombies into the story of Pride and Prejudice. Darcy and the undead? What could be better?

6. The Lost Girl by Sangú Mandanna

In this twist on Frankenstein, the protagonist of this book has been pieced together as a copy of a girl named Amarra, created to replace her if she ever died. But despite a lifetime of preparation, stepping into Amarra's life proves to be more of a challenge than she thought.

7. The Mummy, or Ramses the Damned by Anne Rice

We normally see mummies as dumb, moaning creatures, meandering their way through a haunted house. But in this exquisite book by Anne Rice, Ramses the Great has awoken in Eduardian England. Doomed to an eternal life, he is haunted by the memories of the life he previously led.

In this fantastic YA series, Alex is a bruja and the most powerful witch of her age, but she hates magic and doesn't want any part of it for herself. But when she performs a spell to rid herself of her magic, it backfires, and her family disappears. She's forced to make a harrowing journey to a mystical land alongside a boy she may not be able to trust.

In this modern-day zombie story, Andy is having trouble getting adjusted to his new, undead life. But when he starts going to Undead Anonymous and meets others like him, things start to pick up. That is, until a rogue zombie starts exposing them to the darker side of un-life.

Born in New York but living in Aba, Nigeria, twelve-year-old Sunny is struggling to find a place in the world. Sunny's is an albino and a soccer prodigy, but she's teased at school for being an "akata" (a slur that means "wild thing"). But when three of her classmates introduce her to magic, Sunny discovers that she is one of the Leopard People, a subset of humans linked to the spirit world.

11. Her Fearful Symmetry by Audrey Niffenegger

Set in an old cemetary and told partially from the point of view of a ghost, Audrey Niffenegger's remarkable book is anything but cliche. When two American twins move to London to live in the apartment left to them by their estranged aunt, they find themselves drawn into the lives of their neighbors as they make decisions about what they want out of their life.

The legendary Octavia E. Butler pulls no punches in this brilliant novel, the story of a girl, Shori, who discovers that she's actually a genetically modified vampire.