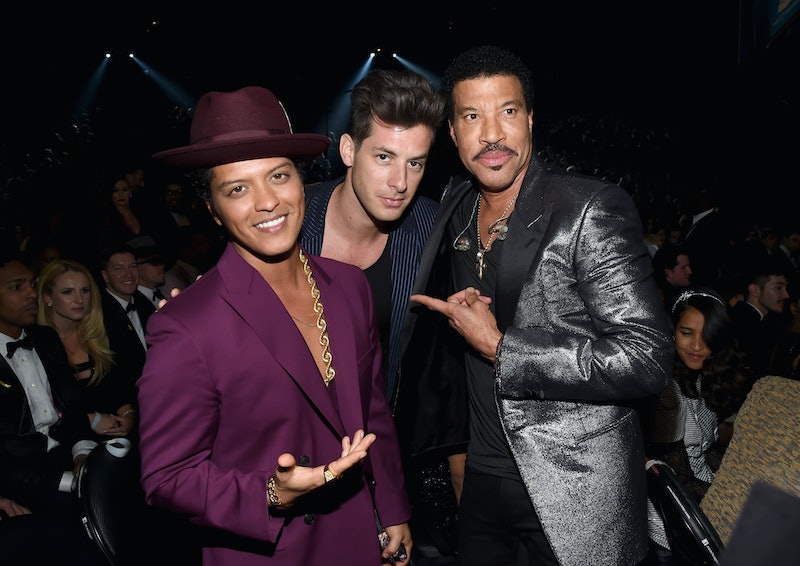 Sound the pop music success horn: the Mark Ronson and Bruno Mars collaboration "Uptown Funk" is now RIAA-certified diamond. What does this mean exactly? Diamond status is when a track sells more than 10 million units — and "Uptown Funk" has actually done one better. As of Oct. 18, it's sold 11 million units. This is a seriously big deal, since it's the 13th song in history to make diamond status (though it's worth noting that the RIAA only introduced diamond status in 1999). There must be a magic ingredient here. After all, this is the fourth time Mars and Ronson have collaborated together — they previously worked on "Locked Out Of Heaven," "Gorilla," and "Moonshine." So why is this the track that went viral?

Trust me, there are a whole bunch of reasons. This track hits all of your pleasure centers, lyrically and melodically. Besides that, nothing seems to make consumers happier today than liberal dashes of nostalgia. The beauty of the track lies in its familiarity: It sounds like any number of songs from 1980s era funk music. But it's a double-edged sword. Its instant familiarity may be why the track has also been dogged by copyright controversy, with Mars and Ronson being accused multiple times of plagiarism.

The Lyrics Tick All The Boxes

Then it proceeds to tick all the boxes under the distinctive and nuanced category that, for lack of a more academic term, I'll call Things That Are Awesome. Pairing high fashion with low fashion? "Got Chucks on with Saint Laurent." Check. Self-love? "Got kiss myself, I'm so pretty." Check. Specious metaphor about being so hot you probably need to call the city fire department? "I'm too hot (hot damn) / Called a police and a fireman." Resounding check. Refrain that doesn't make much sense but sounds vaguely upbeat? "'Cause uptown funk gon' give it to you." Check. Shoutout to good times on the weekend? "Saturday night and we in the spot." I think I've made by point.

The Team Behind The Song Have Incredible Résumés

When you look at who actually wrote this song, it's hard to believe it didn't hit diamond status sooner. Drum roll, please: There's Philip Lawrence, who often collaborates with Mars on writing songs (the pair wrote Mars' "BOB" and "F*ck You" for Cee-Lo). Then Jeff Bhasker is on deck. Who? Only one of the most important unsung heroes of mainstream music. Under the pen name "Billy Kraven and U.G.L.Y," Bhasker has written all the hits over recent years, including co-writing Kanye West's "Monster," Taylor Swift's "Holy Ground" and "The Lucky One," Eminem's "Headlights," and so many more.

Musically, They're Having A Great Time

This isn't an intellectual or experimental hit. Neither Mars or Ronson is trying to come off as dark, tortured, or complicated. They just want to make you feel good and they're using every trick in the musical canon to get you from nonplussed to euphoric in less than five minutes. There are the major chords. There's the automated handclap opener, followed by a millennial whoop. The chorus hits within the first minute. What about that call and response structure? And there's that damn trumpet. God, I love the trumpet. You do too, probably.

Originality is great and everything, but if you recall a dozen other hit songs, they all feel effortlessly familiar, like they're already a favorite. The most obvious track the song recalls is Morris Day and the Time's "Jungle Love" in terms of beat and almost in terms of melody. However, they're not the only ones. As radio.com points out, the track sounds familiar to Michael Jackson's "Jam," Trinidad James' "All Gold Everything" (James ended up being paid royalties by Ronson for the songs' similarities), Zapp & Roger's "More Bounce To The Ounce," and The Gap Band's "Oops Upside Your Head." After a settlement the band made with Ronson, the song's five writers now receive a 17 percent share of the publishing royalties of "Uptown Funk."

So there you have it, the keys to songwriting success: happy lyrics, even happier melody, a group of accomplished songwriters, and all of the best parts of past hits. If you ever needed an excuse to play "Uptown Funk" on repeat all night long until your roommate knocks your door down, this is it. Happy funking.