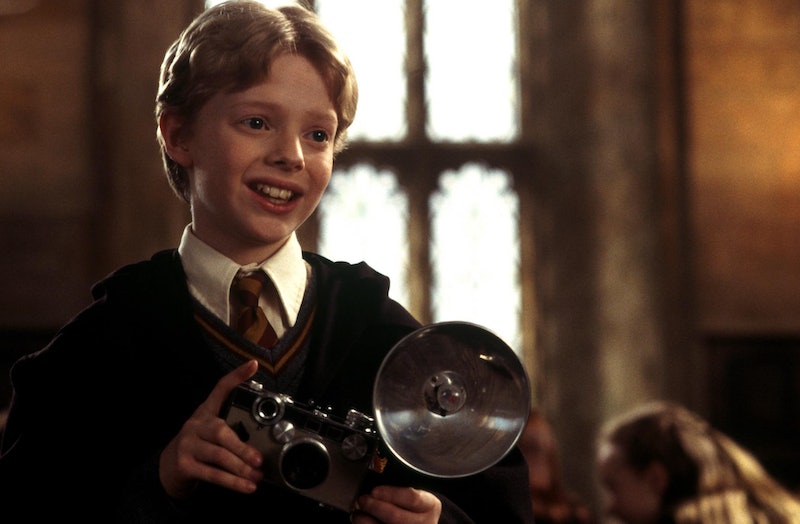 Every Potterhead has at least one character they believe shouldn't have died over the course of the series, but the deaths of particular characters might hit closer to home for some of us than others. Beautiful cinnamon roll Colin Creevey, who died because J.K. Rowling got "trigger-happy," according to Hugh Mitchell, the actor who portrayed the camera-wielding Gryffindor on screen.

Readers first met Colin in Harry Potter and the Chamber of Secrets, when the Harry Potter superfan was just a first-year with a rather obnoxious camera, who later wound up petrified by the Basilisk. Over the course of the series, Colin spent most of his time enthralled with Harry, who was less than enthused by his fan's devotion.

In Harry Potter and the Order of the Phoenix, Colin and his brother Dennis join Dumbledore's Army, but their stay at Hogwarts was soon cut short. After Dumbledore's funeral and the Death Eaters' takeover of Hogwarts, the muggle-born Creeveys are banned from attending the U.K. School of Witchcraft and Wizardry. As Bustle's own Emma Lord points out, the Creevey family must have spent the next year constantly looking over their shoulders:

The mere fact that Colin was alive at the beginning of the Battle of Hogwarts implies that he and his family, surely among one of the new Ministry's top targeted Muggle borns, were on the run for the better part of the year with two underage magic users who had the Trace on them. There was no apparating. There were no magical bottomless carry-all bags with tents and supplies, or protective spells, or anywhere logical to hide. There was only survival, and that same unshakable faith that Colin had in Harry before he even met him.

We don't witness Colin's death directly. Harry only learns that the boy who was so devoted to him has died when he almost walks into Neville, who is carrying Colin's corpse on a stretcher. The underage wizard is described as "tiny in death," but his end is barely commented upon, and, with more prominent figures like Fred Weasley, Remus Lupin, and Nymphadora Tonks also lying dead after the battle ends, Colin's death often gets lost in the shuffle. He becomes a Whatever happened to...? instead of a Wasn't it sad when...?

In an interview on Entertainment Weekly's BINGE podcast, Colin Creevey actor Hugh Mitchell talked with hosts Marc Snetiker and C. Molly Smith about his feelings toward the character. Mitchell is now 27 years old, and makes regular appearances at Harry Potter conventions and events. In addition to talking about "do[ing] maths and stuff" with his fellow cast members, Mitchell tells Snetiker and Smith that the conditions under which he learned of his character's death were less than ideal:

When the final book came out, I wasn't the first to read it. People were kind of going up to me and being like, "I heard about what happened. ... Are you OK?"

Yikes. Talk about a spoiler.

Snetiker immediately follows up with the question of whether Colin's grim fate was deserved. Mitchell replies:

No. There's a sort of prevailing opinion that I think J.K. Rowling got a bit trigger-happy towards the end. You know, she got a bit like, "Ah, screw it. Kill him as well." ... I think there's a certain poignancy to Colin's death, just because he was that sort of picture of innocence.

He's right. Colin's death clearly resonated with the many Potterheads who didn't forget about him, but do you think he only died because Rowling got "trigger-happy," as Mitchell says? Let's talk about it on Twitter!

More like this
'Bridgerton' Star Nicola Coughlan Confirms Season 3 Will Focus On Colin & Penelope
By Grace Wehniainen and Alyssa Lapid
16 Novels That Paint A Realistic Portrait Of Abortion
By K.W. Colyard
Candice Carty-Williams’ 'People Person' Tackles Daddy Issues With Warmth
By Sam Rogers
The Trailer For The 'Game Of Thrones' Prequel 'House Of The Dragon' Is Dark AF
By Grace Wehniainen
Get Even More From Bustle — Sign Up For The Newsletter