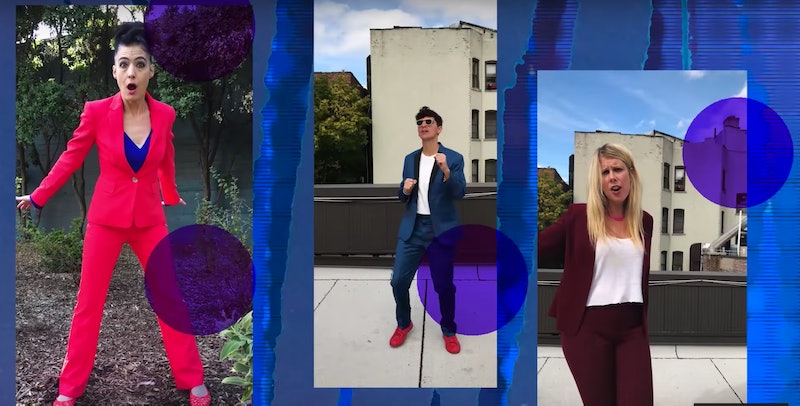 Reunions of much-loved, long-dead bands normally reeks of opportunism. If bands aren't regrouping for the money, they're often just trying to make a strategic business decision before they take the next step in their career. So snaps to the universe that Le Tigre reunited for a pro-Hillary Clinton song, exciting their fans with the prospect that the group is back and using their brand recognition to make a difference. They've regrouped for the most important reason in the world: to politely suggest, that you swerve Trump on Election Day and vote for Hillary Clinton.

The video's not just musically, but also aesthetically, convincing: Le Tigre are rocking some presidential pantsuits, and there are also a ton of adorable cats. (Is this a nod to Trump's p*ssy-grabbing comments?) But, lyrically, the band get serious. "Trump has got to go!" they shout, before justifying why: "Trump thinks Putin is a very strong leader. Just like him a fascist bottom feeder. Building a wall is his greatest vision, bigotry colors his every decision."

But it's not just about Trump's weaknesses; it's a celebration of why Clinton is a convincing candidate: "She's already done the math and she's ready with a plan. And she's always got to work twice as hard as every man." Depressing, but true. If anyone's ready to take on the insane workload of a president, she seems to me to be the one for the job.

I guess it's hardly surprising. Le Tigre's lyrics have been concerned with feminist and liberal themes from the beginning, so, if they'd stayed silent on a battle between a proven misogynist and a female candidate who's, if anything, overqualified for the role, it would have been low-key unsettling. But still, in an era in which bands are capitalizing on our nostalgia by regrouping to sell out stadiums, it shows real heart and compassion to regroup solely in the interest of someone else's career and in the interest of our country's political future. This isn't about money or fame; this is about a candidate who they believe can make a difference.

So get on the nostalgia bandwagon and shake it to this rousing pro-Hillary anthem: this is a reunion for all the right reasons.