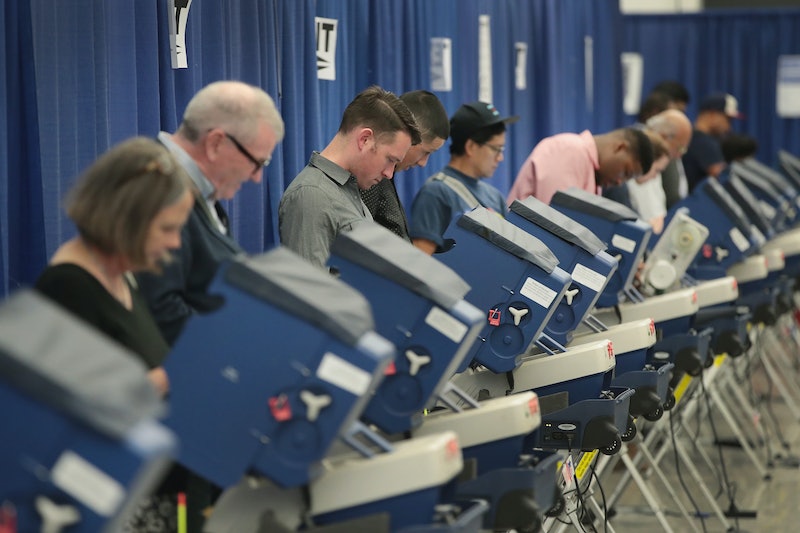 I know there's a lot to remember during this jam-packed election season, but it's almost over, I promise. The finish line is in sight, there's light at the end of the tunnel, and now we're just down to the nitty-gritty details. You may still have a few questions about the voting process, though: like can you vote if you've lost your ID? You might be panicking right now if you've found yourself in this position, but don't worry: there's still hope. Because, in many cases, you'll still be able to cast your ballot just fine. As I'm sure you recall from registering — and if you aren't yet registered, please do that ASAP, as deadlines are approaching! — that process included a check of your identification, so in many states, being registered is proof in itself that you have the required documents in order. As a result, you won't actually have to show ID again in order to vote in the General Election on Nov. 8.

That information is according to Rock The Vote , a website with extremely comprehensive coverage of any question you could imagine relating to the election — I highly recommend taking a look at their Election Center to find out what you need to bring to the polls for your state. For instance, according to the site, most voters in New York, Illinois, and California won't be required to show ID at all, unless they're a first-time voter or if they fail to properly provide all their identifying information when they register. States like Oregon go so far as to say that no identification is required for any voters at all. States like Colorado and Texas are on the other end of the spectrum, requiring all voters to show some form of valid ID — although the latter indicates that if someone is struggling to obtain one of the acceptable forms of identification, "he/she can present alternative documentation (such as a voter registration certificate, utility bill, bank statement, paycheck, or any government document with the voter’s name and address) and sign a document stating that he/she has a reasonable difficulty in obtaining photo ID."

So long story short, it really depends on the state, and it's really important that you check. Even if you've lost one form of ID, it's very likely that you'll still be able to cast a ballot at your polling place, because every state that I checked accepted multiple forms of ID, including ones that you might not consider off the top of your head. At the end of the day, we all have the same goal, and that's to hear from as many voices as possible on Nov. 8. So just make sure you're prepared, and don't sweat the small stuff, like misplacing an I.D. You have plenty of time to worry about that once you've cast your vote.