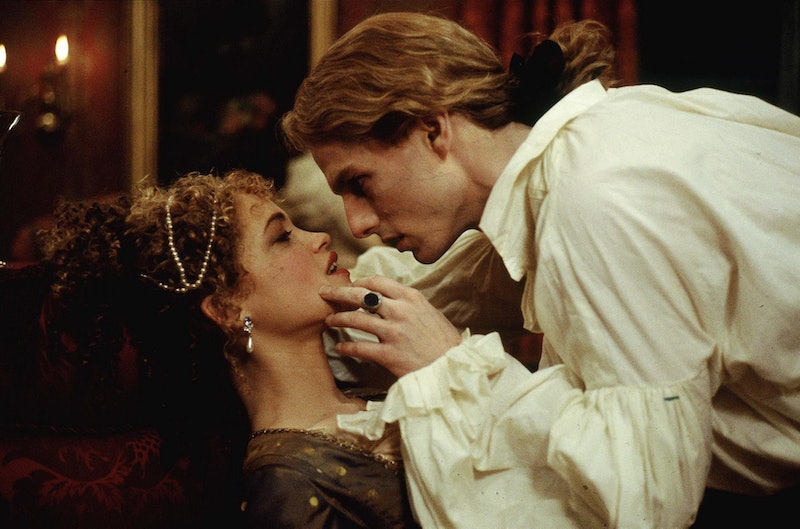 Halloween is finally upon us — that special time of year where we can shamelessly stuff our faces with candy corn and read all the scary stories we can get our hands on. While tales of ghosts and haunted houses are plenty scary, nothing frightens me quite as much as vampires from books. You know the ones — those blood-sucking demons who have been giving readers nightmares for nearly two centuries.

A wildly popular trope in the 21st century, vampires have been making their mark on literature since the 1700s — and perhaps even earlier than that. It wasn't until 1816, "The Year Without a Summer," when a group of authors including Lord Byron, Percy and Mary Shelley, and John William Polidori, decided to have a ghost story competition that the first true vampire story as we know it was born. Out of the fun and games came The Vampyre, Polidori's tale about a young, naive man whose life is destroyed by a sinister man who is much more than he pretends to be, and the original vampire to enter the literary canon.

Since its creation 200 years ago, the genre of vampire fiction has grown, changed, and expanded beyond anything the original creator could have possibly imagined, with each new story appearing to be entirely different from the one before. Some of the most famous bookish vampires are based on real-life stories, while others were the product of an author's twisted imagination. In certain fictional worlds, vampires are good, loving, and the objects of romantic desire, white others are terrifying beasts out for nothing more than blood and death.

Whether you're looking for costume inspiration or trying to find the perfect spooky character to read about this Halloween, here are 9 blood-sucking vampires from books that every true literary-lover should know.

The original bloodsucker, the antagonist of Polidori's The Vampyre is as bad it gets. Not only does Ruthven, ya know, drink people's blood, but he also has the power to morally corrupt anyone in his company. Alluring and sexy and deadly, Ruthven is bad news all around.

You can't have a round-up of vampires without mentioning the most famous baddie of them all: Bram Stoker's Count Dracula. Possibly the most iconic blood-sucker of all time (Sorry, Edward Cullen), this book character continues to influence how we perceive vampires: dark, devious, and irresistible.

4. Lestat de Lioncourt, Interview with a Vampire by Anne Rice

Speaking of irresistible, Anne Rice has a knack for creating vampires who are just that. One of her most beloved blood-suckers, Lestat, is the antihero readers love to hate and hate to love. A six feet tall blond hunk with iridescent gray eyes, Lestat has a nasty habit of using his good looks and charm to lure his prey to their death. An ultimately redeemable character, Lestat is a complex character worth examining.

5. Akasha, The Queen of the Damned by Anne Rice

Another creation of Anne Rice, Akasha, who was famously played by Aaliyah in the 2002 film adaptation, is one badass vamp. An ancient blood-sucker determined to rule the world, Akasha's hobbies include murdering her lovers, killing other vampires, and wiping out the human race. Yeah, she's pretty terrifying.

From rabid dogs to evil ghosts, Stephen King knows a thing or two about creating terrifying monsters, and in his short story, 'Salem's Lot,' he turns his attention to vampires. Kurt Barlow, the story's main antagonist, is just about as creepy as vampires can get — ancient, cunning, into human sacrifice, and dead-set on taking over the town.

To me, Bunnicula is just as memorable and iconic as Stoker's Dracula. Fight me on it. A fun children's book that turns the idea of the traditional vampire on its head, this classic series deserves a place among the best vampire books.

Before he was famous for creating Game of Thrones, fantasy author George R. R. Martin wrote his own vampire novel, starring Joshua York, a well-meaning vampire who wants to save his kind from a life dependent on human blood.

In another unique take on the vampire legend, Octavia Butler's blood-sucker, Shori, is a young girl with amnesia — or, that's all she was until she finds out she's actually a 53-year old half-human, half Ina. Caught between her two existences, Shori struggles to define her own identity. A powerful character unlike any other in the canon, she's one vampire you'll want to read up on.

More like this
14 Scary Campfire Stories To Tell Your Friends
By Charlotte Ahlin and Kaitlyn Wylde
These 25 International Horror Movies On Netflix Prove Fear Is A Universal Language
By Bustle Editors
Read The First Pages Of Emma Rosenblum’s Highly Anticipated Debut, 'Bad Summer People'
By Samantha Leach
26 Ghost Story Podcasts To Get You Ready For Halloween
By Jessica Booth, Mia Mercado, JR Thorpe and Emma Carey
Get Even More From Bustle — Sign Up For The Newsletter