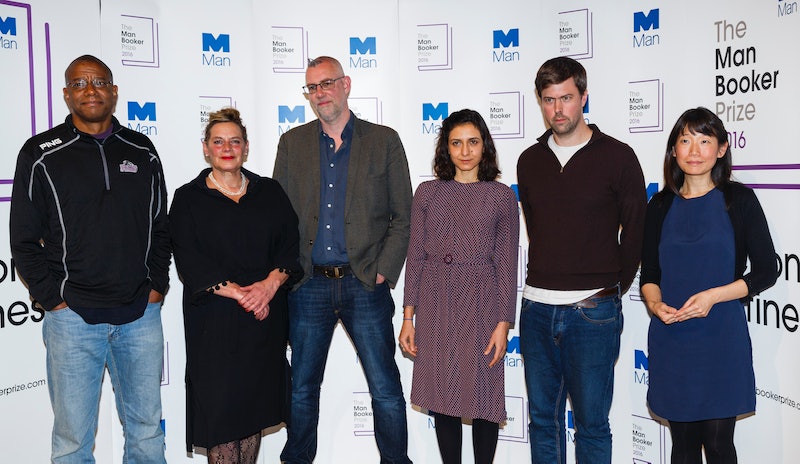 Literary award season — which, yes, is a thing — is well underway, and book nerds everywhere were pleased to hear that Paul Beatty won the Man Booker Prize for his novel The Sellout. While serious literary nuts know everything there is to know about the awards this season and years past, there are plenty of other readers wondering things like how is the Nobel Prize winner selected, who chooses the National Book Award finalists, and how many women have won the Man Booker Prize? While there aren't as many female champions as we'd like, don't let the name fool you — plenty of women have taken home the prestigious prize.

The Man Booker Prize is an annual literary award given to an English language novel published in the UK during the year of the prize. Despite its seemingly gendered name (which actually comes from the Man Group, an investment firm that supports the prize every year), the Booker Prize, as it's commonly referred to, doesn't have any limitations or requirements based on gender, or even genre. Though there used to be a stipulation that prize winners had to be a citizen of the commonwealth of Nations, the Republic of Ireland, or Zimbabwe, in 2013, it was announced authors from all over the country would be eligible from that year forward. Now, the winner is chosen much more simply as "the best novel in the opinion of the judges." So how many women over the years have met that criteria?

Of the nearly 50 prizes awarded since 1969, only 17 of them have been received by women authors, a mere 34 percent. What's more, a woman of color has never won the prize. Is your mind totally blown, too?

Although the prize's 2016 shortlist is less diverse than in previous years, it does include three women on it: Ottessa Moshfegh of the US, nominated for her debut novel Eileen, Deborah Levy of the UK, nominated for her sixth novel, Hot Milk, and Madeleine Thien of Canada, nominated for her third novel, Do Not Say We Have Nothing. That means that in the 45th year, the Man Booker Prize shortlist is 50 percent women. And, in its most recent history since 2006, five of the ten Booker Awards went to women, including Indian author Kiran Desai in 2006, English writer Hillary Mantel in 2009 and 2012, and Irish author Anne Enright in 2007.

A step in the right direction for a literary award who historically favors white, male authors, only time will tell if female authors will be able to close the awards gap and finally get the equal recognition they deserve.

More like this
16 Novels That Paint A Realistic Portrait Of Abortion
By K.W. Colyard
Lauren Rae Is Bringing Back The Sex And The City Vibes In Her New Memoir
By Shahed Ezaydi
Annie Lord’s Memoir Will Make You Believe In Love Again
By Shahed Ezaydi
10 Must-Read New Books Out This Week
By K.W. Colyard
Get Even More From Bustle — Sign Up For The Newsletter