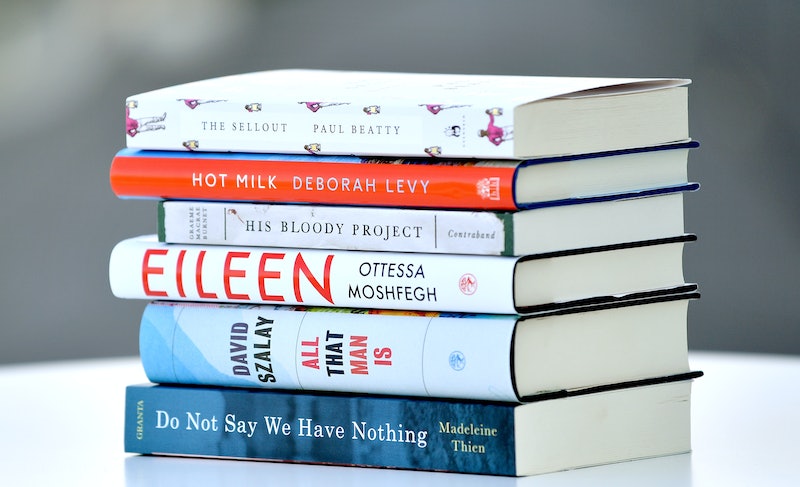 It's that time of year again, book nerds. The 2016 Man Booker Prize shortlist is out. Last year's shortlist was lauded for its diversity, but how does this year measure up?

In 2015, the coveted award went to Marlon James for A Brief History of Seven Killings . James was one of six writers of color who made the 13-author Booker longlist that year, four of whom would go on to grace the six-book shortlist. The Jamaican writer was only the second black author to take home the award, following Ben Okri, who won in 1991 for The Famished Road. A black woman has never won the Man Booker Prize.

This year, only three of the so-called "Booker dozen" were written by authors of color, and all three are from Canada or the United States. (Last year, authors from Nigeria, India, and Jamaica were included.) All three writers —Madeleine Thien, Paul Beatty, and Ottessa Moshfegh — made the shortlist. That means that 50 percent of this year's shortlist are diverse authors, so how does that stack up to last year?

In 2015, six of the 13 authors represented in the Booker dozen were not white, meaning that writers of color comprised 46 percent of the list. Not too shabby, given the literary award's history. When the six-book shortlist was announced, four of those writers had moved ahead, bringing the percentage of representation up to 67.

When the 2016 longlist came out, only 23 percent of the chosen few were writers of color. For the shortlist, the number was 50 percent. Like I said, it looks good. But that final number, the 50 percent representation, is a little more complicated, because literary representation for authors of color on the Man Booker Prize shortlist is down more than 25 percent in 2016 from last year.

On Tuesday, the Booker Prize judges were challenged with "question[s] on the issue of national diversity" as it relates to their selections. Panel Chair Amanda Foreman said:

As a panel we respond to quality first. Within quality we are very eager to be able to experience a diverse range of subjects and voices and regions, you name it. You base your judging on what you get. We can't choose what we get, but I assure you once it is in our hot little hands, then we are full of energy, and integrity, and passion for the books we are judging. So what we have we are very pleased with. I can't comment on what we don't have.

This kind of defense places the onus of responsibility for diverse literature on marginalized authors, tasking them with getting their books into the hands of the literary world's heavy hitters: Big Four publishers, prominent critics, and literary prize panels. It ignores the difficulties that women, queer writers, and authors of color face on the path to publishing their books, while absolving literary gatekeepers of any responsibility in promoting diverse writers and their work.

Wood said: "One of the benefits of including people of all nationalities is not to have any snobbery about nationality". Asked further whether she would have "preferred" a more diverse selection, Wood said, "Not really because you have to choose them individually".

"Would everyone have preferred more diverse submissions, of high quality, not just for the sake of diversity? Very possibly. But we're judging quality first so it's a slightly academic premise, I think," she said. [sic]

To not "have any snobbery about nationality" is the equivalent of saying, "I never look at the author's name or picture when I pick up a new book to read." The people who say this, invariably, have shelves full of books written by predominately white and predominately male authors. It's called unconscious bias, and it happens to all of us, but it can be fought.

For example, if you ask me to name 15 authors off the top of my head, there's a good chance that dead white guys will be over-represented, simply because those are the names that come to mind. Give me the opportunity to edit that list, and I'll confront my unconscious bias to create a more representative list of literary greats.

That's exactly what Wood doesn't want to do, however. She doesn't want to go looking for a Belizean, Nigerian, Dominican, Sri Lankan, or Samoan author, and she thinks it's merely possible that the Booker Prize panelists would have wanted to see more diverse literature in their stacks.

Furthermore, Wood's use of her claim that the Man Booker is "judging quality first" as an aegis against criticism assumes that white writers just produce better quality work — and at higher volumes — than their non-white counterparts. You see this argument pop up every time a white actor is cast to play a person of color: The casting directors are just picking the best person for the job. It's not our fault that white people are always the best. Spare me.

Look, there are a lot of factors that play into diversity in publishing, and, no, responsibility doesn't rest solely with the Man Booker committee, though there's certainly work to be done on their end. All in all, including three authors of color in a shortlist of six is pretty good, but there's still work to be done to ensure that authors of color are being given the same space to succeed as their white counterparts. Those involved with the Man Booker Prize are part of that process.

The 2016 Man Booker Prize finalists are: