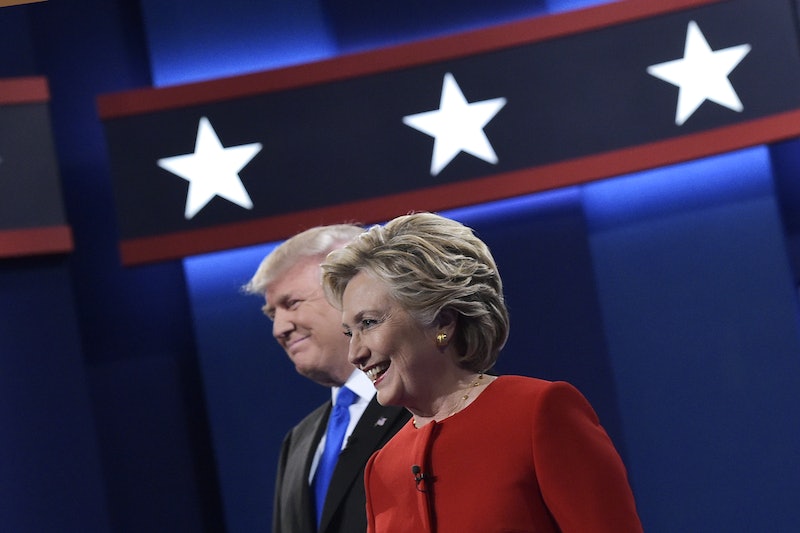 You're experiencing a distinct, specific emotion — maybe a gut-wrenching sense of loss after finishing a book, or a feeling of utter and total contentment after wrapping up a lovely meal with friends. The emotion is overwhelming, but you don't know the right word for it because that word doesn't exist in English or, perhaps, in any language. Finding the right words to describe feelings about the 2016 presidential election can be even tougher. Despair, horror, disgust, frustration, anger — none of these words quite do justice to the pain and anguish many Americans are experiencing.

Eden Sher gets it. All her life she's suffered from dyscommunicatia (n. the inability to articulate a feeling through words.) So she wrote The Emotionary : A Dictionary Of Words That Don't Exist For Feelings That Do to help legitimize those feelings through definition.

This election season, I'm personally feeling a fair bit of contrangst (n. the anxiety of not having the power to direct another's behavior or a course of events) and, admittedly, a little superianation (n. frustration due to other people not understanding everything exactly as you mean it...or generally not being as smart as you.) There are so many feelings being stirred by this election that just don't have words to match them. Eden Sher is here to fix that.

In anticipation of tonight's debate, Sher has exclusively shared five brand new election-related words with Bustle. Hopefully, these will help you come to terms with the emotional upheaval of this election season:

It has become increasingly difficult for Hillary Clinton supporters and Donald Trump supporters to find some middle ground and put themselves in the shoes of the other. Descrepartancy describes that growing divide.

Sadly, bad behavior and offensive language has become the norm for Donald Trump, and at this point, many voters feel unprovokable by his actions and words.

It seems Donald Trump can say whatever he wants and get away with it, but falling polls indicate otherwise.

...and to obsessively check to see if FiveThirtyEight Editor-in-Chief Nate Silver has tweeted any updates.

For more words like these, get the book, available now from Razorbill.

The Emotionary: A Dictionary Of Words That Don't Exist For Feelings That Do by Eden Sher, illustrated by Julia Wertz, $19.95, Amazon