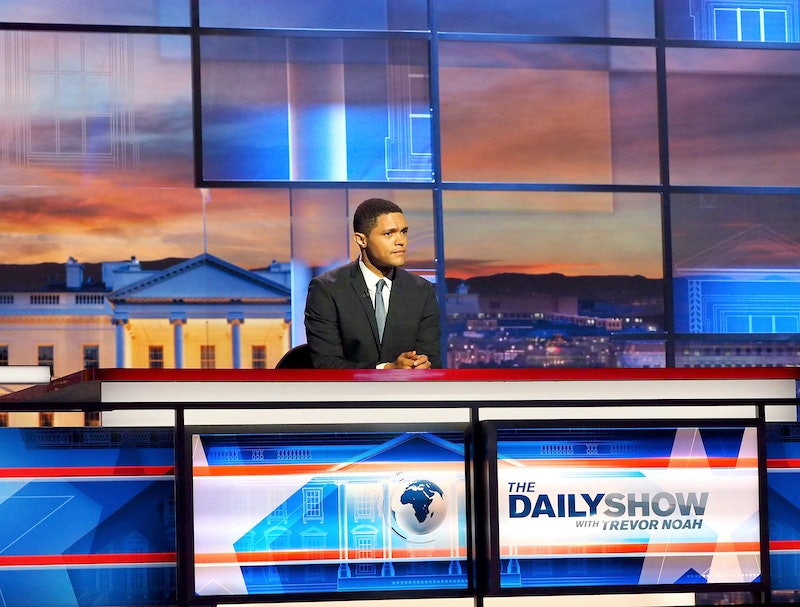 The lewd and vulgar remarks Donald Trump made with Access Hollywood reporter Billy Bush have been taking the media by storm. Those comments were made in 2005, shortly after Melania and Trump were married, and Melania, who has been largely quiet during this campaign, spoke out on Fox News and CNN about those remarks, saying that Bush might have "egged him on." And Daily Show host Trevor Noah's commentary about Melania's defense of her husband, echoes the reaction a lot of people are having.

Melania dismissed the claims that several women have made alleging that Trump sexually harassed them, saying in at least two interviews that the claims were "organized from the opposition," as well as saying the the media does not "check the background of these women." Trump himself has denied all allegations of sexual assault and unwanted advances. Melania even went as far as to imply that Bush is at fault for encouraging Trump to engage in "dirty talk," suggesting that Trump was a victim of peer pressure rather than a 59-year-old man responsible for his own comments.

Daily Show host Noah hit the nail on the head when he blasted this excuse, saying that "the guy who says he's gonna tax China, wall Mexico, and knock the hell out of ISIS, that guy can't handle himself in a conversation with Billy Bush? He got egged on?" Noah said in a recent segment.

Trump, who has shockingly tried to ward off the claims by going as far as to imply that some of the women who accused him of assault are not attractive enough to have received any attention from him, has also posted tweets that seem to be boastful of dating young women. And when writer for People magazine Natasha Stoynoff claimed Mr. Trump had pushed her against a wall and kissed her during an interview in 2005, Trump took several aims at her.

“Take a look. You take a look. Look at her. Look at her words. Tell me what you think. I don’t think so," Trump said. Trump's scandal ridden campaign has been plagued with a series of recent setbacks, and his defenses as well as his recent tweets in light of the controversies really seem to be doing the candidate more harm that good. And as Noah pointed out about Melania, who seems to have suggested that Trump was pressured to engage in "locker room" talk, her defense just doesn't cut it.

A commander-in-chief should and has to take responsibility for his or her decision, and the "egged on" defense isn't exactly presidential. As an op-ed for the Washington Post said, Trump's campaign, is "400 centuries too late," a comment that fits well with a candidate who sometimes seems to think he is running for the office of King.