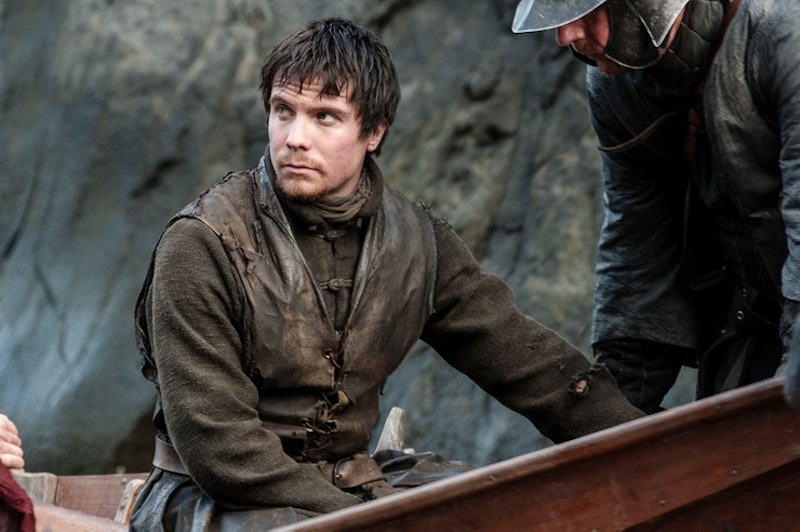 After four long seasons, Gendry is finally going to stop rowing. It's been rumored Joe Dempsie may return for Game of Thrones Season 7 earlier in 2016, but now Watchers on The Wall is reporting Dempsie was allegedly spotted on set. That's right, Gendry may really be back for Game of Thrones Season 7, you guys, and you will not believe where he may have ended up. If the reports are accurate, it looks like Gendry may be seen at Dragonstone — you know, the place Ser Davos helped him escape from in Season 3.

At this early stage of filming, pinpointing where the characters are is no easy task. Dempsie is reportedly filming in Spain where the big meeting between Ser Davos, Brienne, Tyrion, and Daenerys is set to take place. Watchers on The Wall is predicting Spain is standing in for the Dragonpit and Dragonstone — the location of the Targaryen's House before the Baratheons were given Dragonstone after the fall of the Mad King. If Daenerys has indeed made it to King's Landing it makes sense for Jon Snow to send his most trusted envoys to meet with the Dragon Queen — but why would Gendry be there?

It is possible Gendry never got far in his row boat at all, and he ended up lying low at Dragonstone until Stannis went North with his army. If he has been hanging out on the castle grounds the whole time, then Daenerys could catch him off guard when she arrives. It sounds crazy, but Gendry may find himself with this motley crew of characters completely by chance. It is rare for anything to happen by accident in the world of Westeros though.

Remember, when rumors of Dempsie returning for Season 7 first began circulating he was spotted in Belfast, where the bulk of the filming for Game of Thrones generally takes place. This means Gendry could actually be traveling with Ser Davos and Brienne. It would make sense for Gendry to reunite with Davos (who he has a history with) first and then decides to join Jon's fight — especially once he realizes Jon is Arya's brother.

It is unclear at what point in the season the meeting between Jon and Daenerys' people takes place, but knowing Game of Thrones it is more likely to occur toward the middle or end of the season. That would give Gendry plenty of time to reunite with Davos in the North. While everyone is pulling for an Arya and Gendry reunion, a reunion between Gendry and Davos is the next best thing.

Davos saved Gendry's life, and after all he has lost, having Gendry in his life could give Davos back of a sense of family. Losing his son, his king, and Shireen has not been easy on Davos. He has found a renewed purpose in joining Jon's cause, and seeing him share that purpose with Gendry would create a beautiful full circle moment for these two characters. Having Gendry see the importance of Jon's fight against the White Walkers would also go a long way in explaining why he would agree to return to Dragonstone with Davos.

Of course, all of this is speculation at this point. The only thing that is certain is Gendry may be finally returning to Game of Thrones, and that is reason enough to get excited for now.