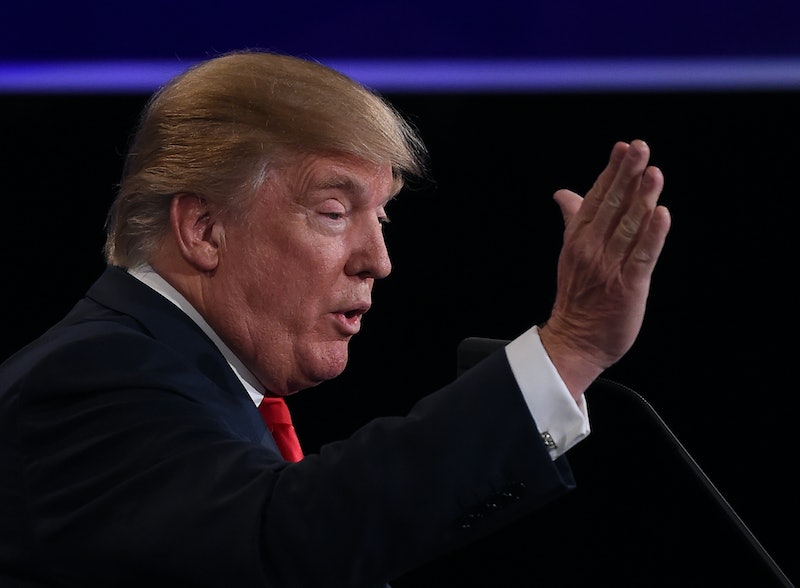 In the third and final debate of the 2016 presidential election, Donald Trump said what is arguably one of the most ridiculous comments of the year so far. In reference to his stance on border control, Trump said America has some "bad hombres" and that "we're gonna get them out." Based on how the election has gone thus far, it's hard to fully grasp that there are more absurd things for Trump to say or do. However, 2016 seems to be the truly shocking gift that just keeps on giving when it comes to surprising, strange, and jaw-dropping moments from Trump.

The Trump tapes, which were released shortly before the second presidential debate, seemed to only be the beginning of troubling statements from the Republican candidate for president in the month of October. This is saying a lot, given the fact that Trump has been spewing (and tweeting — so much tweeting) offensive rhetoric since he announced he was running for president — and long before that. But, as 2016 has reminded us time and time again, it can always get worse.

When moderator Chris Wallace asked the candidates to discuss their policies on immigration and border control, Trump responded by saying, "We're going to secure the border, and once the border is secured, at a later date we'll make a determination as to the rest," Trump said. "But we have some bad hombres here, and we're gonna get them out."

Not only is the comment utterly ridiculous for the fact that it seems like Trump is trying to put a "humorous" spin on an issue that affects thousands of people on a serious, life-changing level, but it's also mocking, insensitive, and it insinuates that Mexicans are "bad" people — a racist and dangerous idea that Trump has perpetuated multiple times.

Further, Trump seems to be pandering at Mexican voters by using Spanish at the same time he is painting them, once again, with a broad stroke as criminals. When you winkingly try to use one of the few Spanish words you know to cheaply connect with the very voters you call criminals, advocate deporting, and threaten the family structures of, you have reached a new low.

On one hand, it's hard to do much but shake your head in utter shock at Trump's offensive rhetoric. On the other, comments like this are reminders that Trump holding any form of public office (and the mere possibility) is a dangerous and terrifying concept.

Sadly, "bad hombres" isn't the first offensive thing Donald Trump will say, and it certainly isn't the last. In the meantime, let it serve as a reminder that voting on November 8 is the most important thing you can do this year.